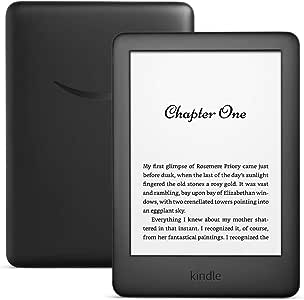 This product only ships to the United Kingdom, Guernsey, Gibraltar, Ireland, Isle of Man or Jersey.

Meet Kindle, now with a built-in adjustable front light so you can read indoors, outdoors and at more times of day. Purpose-built for reading, Kindle features a glare-free touchscreen display that reads like printed paper, even in direct sunlight.

With Audible, Kindle lets you switch seamlessly between reading and listening via Bluetooth-enabled speakers or headphones.
Experience the best of Audible with membership—if you’re new to Audible, sign up for an Audible free trial. Learn more

Discover great reads and Kindle exclusives. Prime members get unlimited access to over a thousand books, magazines and more. Kindle Unlimited offers over 1 million titles and thousands of audiobooks. With Whispersync, switch from Kindle to the Kindle app without losing your page (requires Wi-Fi).

4.7 out of 5 stars
4.7 out of 5
21,919 global ratings
How are ratings calculated?
To calculate the overall star rating and percentage breakdown by star, we don’t use a simple average. Instead, our system considers things like how recent a review is and if the reviewer bought the item on Amazon. It also analyses reviews to verify trustworthiness.

L. J. Roach
TOP 1000 REVIEWER
4.0 out of 5 stars Solid and reliable - the best basic Kindle to date.
Reviewed in the United Kingdom on 15 April 2019
Verified Purchase
---The back story

It has been nearly a year since my Kindle saga started. Around this time last year, I started toying with the idea of replacing my beloved 3rd generation Kindle Keyboard, which is often mistaken for the first-ever Kindle. It wasn’t the first (or even the second) Kindle but it was a huge success. For the last 8 years, it has served me well. It has been thrown around, visited multiple countries, sandy beaches, and stayed solid through my reading journey. Until recently.

When my reading pace increased significantly last year (as a result of starting my blog), it was initially the lack of a backlight I found frustrating. And then, more recently, the battery started failing and it often crashed. Combined with a lack of space for physical books, I decided to do some research. After a quick glance on Amazon, I noticed that they were releasing a new Kindle, and now here I am.

But let’s get on with the review!

--What I love about it

Someone in her infinite wisdom (that’ll be me) decided to go for the white model with a white cover (featured below). As much as it shows up every speck of dust and fluff, I still love it and I feel that it interferes less with my reading than the black models.

Despite being only 167 ppi, it does a wonderful job of this detailed cover of Barbara Henderson‘s Fir for Luck (one of my first new downloads). I don’t think the attached photo does it justice but the text is crisp and clear with no ghosting. The backlight is very powerful and I can’t foresee a scenario where I’d need it any brighter than the maximum (not shown).

-The feel and features

It is also very compact without being too small and light but sturdy. Although it is not a new function, I’m enjoying having the ‘Time left in chapter/book’ options as well as the percentage, which the Kindle Keyboard does not have (only the percentage). I am a ‘chapter reader’ which means that I absolutely have to finish a chapter before I put the book down.

The screen, in all honesty, is not entirely free of glare. At home, I read with my back to a window, and on a particularly sunny day I found myself having to adjust my position to stop the light bouncing off the screen. It wasn’t bad enough to make me not recommend it, but I can’t deny it is there.

I decided to enable the passcode function for extra security, partly to deter nosy people (it’s rude to look through people’s Kindle libraries you know!) and partly just in case I lost it and someone decided it would be fun to download lots of books. The deviants.

The passcode function is slow. Or at least it seems slow. I’m so used to chucking my thumb on my phone and it responding in less than a second, the fact that it takes me 8-10 seconds to open my Kindle seems like an eternity. But this is very much a first world problem.

-The lack of page turn buttons

I did not see this coming, but I really miss the physical page turn buttons. I initially found it a bit distracting that I had to keep moving my thumb to go to the next page, when my old Kindle had page turn buttons on both sides so I didn’t have to adjust my grip.

Having said that, the only Kindle currently available with page turn buttons is the Oasis, and there’s not enough novel functionality on that model to warrant me paying the considerably higher price.

I love my new Kindle. I sometimes just pick it up and look at it and feel it just because I can. I honestly think my reading speed has increased as I’m able to tailor the font, font size, spacing and margins to my own preferences.

This model meets all my needs. I have seen the better models and I honestly can’t tell the difference in the screen resolution, and as I mentioned previously, I’m not about to fork out for the Oasis model for the sake of a couple of buttons.

I reluctantly give this four stars as it's not perfect but if I could give it 4.5 stars I absolutely would.

If you’re considering buying your first Kindle or upgrading to a newer model, definitely consider the All-New Kindle.

Thorson
2.0 out of 5 stars nice device, good size to read from and hold 1 handed but battery life is not as advertised.
Reviewed in the United Kingdom on 15 April 2019
Verified Purchase
dropped to two Stars because of the terrible attitude of amazon staff, when dealing with their own brand devices.

First of all, the device itself is a nice enough form factor, light and easy to hold. Screen glare isn't a problem and it's easy to read from (easily change font and font-size it even includes an open source font for dyslexia which is a nice touch. It came logged in to my amazon account already, which again was a nice time saving touch! When I got the device I put it on charge immediately looking forward to catching up on some much needed reading. As expected It charged up quite quickly. This is where the fun ended however....

The advertised "weeks of reading time" is not very accurate. After just 24hrs (about 4-5 hours of reading) the device was at 52% battery, amazon support were brash and very unhelpful on the matter and worse still I've been unable to actually talk to anyone about the problem!

As expected, some activities eg browsing the kindle store, or uploading books and having them indexed will increase battery usage, BUT when the device is idle the battery falls at an alarming rate. I can't see how there are "weeks of reading time" on this device. The customer services were next to useless it's taken me several emails and online chats to finally be offered a replacement rather than just asking "what software version" and "have you reset the device" I'm bemused at attitude of amazon over this to be quite honest.

fitzy
TOP 1000 REVIEWER
5.0 out of 5 stars Great new addition to Kindle family
Reviewed in the United Kingdom on 15 April 2019
Verified Purchase
I bought this for my mum, whose eyesight is really quite poor now. She's always been a keen reader and has been struggling of late. I've used a Kindle Paperwhite myself for a number of years and was going to buy another of those, when I saw that there was a new Kindle coming to market. Having compared the 2, I chose the new one- not simply on cost, but it had all of the functionality that would be needed (front light, ability to increase font size etc). Without exaggeration, this has made such a positive impact on her. We set 'print' to font size 8 and, coupled with the front light, she was reading again for the first time in months. I'd always recommend a Kindle anyway, but for a relative with failing eyesight, it really was a god-send.
Read more
1,002 people found this helpful
Helpful
Comment Report abuse
See all reviews
Unlimited One-Day Delivery and more
Prime members enjoy fast & free shipping, unlimited streaming of movies and TV shows with Prime Video and many more exclusive benefits.
> Get Started