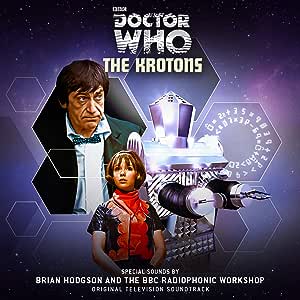 4.6 out of 5 stars
4.6 out of 5
19 customer ratings
How does Amazon calculate star ratings?
Amazon calculates a product’s star ratings based on a machine learned model instead of a raw data average. The model takes into account factors including the age of a rating, whether the ratings are from verified purchasers, and factors that establish reviewer trustworthiness.
Top Reviews

Mr Creosote
4.0 out of 5 stars The worst smell in the universe
Reviewed in the United Kingdom on 14 June 2014
Verified Purchase
'The Krotons' was a 4-part Dr Who (Patrick Troughton) serial from 1968/69, and is often regarded by the cognoscenti as basically being a bit dull, with ridiculous-looking monsters. Budgets were so tight at the time that the Beeb couldn't even afford any incidental music for it... so you might well ask why on earth anyone would want to hear a "soundtrack album" for it 45 years later!
A cynic might guess that it's because Doctor Who fans are often obsessive aspergic collectors, easily parted with their money. However, gurus of electronic music will be aware that the lack of a conventional music score on this Doctor Who story was made up for by the legendary BBC Radiophonic Workshop, whose Brian Hodgson concocted even more sonic alchemy than usual to accompany the on-screen action. So, what we have is a nicely put together little CD, albeit just over 25 minutes in running time. It's been lovingly curated and remastered from the original tapes by MArk Ayres (who reputedly rescued them from a skip at the back of the BBC carpark, after some philistine managers had closed it down and earmarked its tape archive for landfill).
There's twenty four of Hodgson's tracks on here. And if you're at all interesting in electronic sounds and wierd noises, you'll find some absolutely delicious stuff amongst them. None of them were created with what we'd regard as proper 'synthesizers', but instead with a motley array of electronic test gear, customised gadgetry and primitive tape effects.
About half the pieces are ambient textures and drones, used in the background of scenes to give them some 'atmosphere'. Several of these use a bizarre device known as the 'Cystal Palace', a transparent perspex box containing "a tangle of wires and rotating vanes, a Dictaphone motor and the gold nib of a Conway-Stewart fountain pen", which functioned something along the lines of an analogue sampler/sequencer/source-generator, capable of producing pulsing morphing soundscapes. Highlights include the eerie "The Learning Hall", the ominous "Entry Into the Machine" and "Machine And City Theme", and the brittle "Kroton Theme".
The rest of the sounds tend to be shorter spot effects, which would accompany specific happenings on-screen, lending credibility to some prop or other. These include the nasty electronic "Door Opens" drone, the visceral white noise schwoosings of "The Dispersal Unit", and a new variation on the Tardis "landing" sound.
Thrown in for good measure is the appropriate version of the Doctor Who theme tune (Delia Derbyshire's revamp of 1969, with its echoplexed bass line and additional spangles).
All in all, what we have on this CD was never intended to be listened to on its own as music - it was all designed for specific functions in the context of a television program, to support the drama. But it sounds awesome! I'm happy to own a copy. :)

zax93
5.0 out of 5 stars Pure Electronic
Reviewed in the United Kingdom on 11 November 2017
Verified Purchase
This is Great! Pure Electronic sound that are surprisingly pleasant and almost musical in parts - if you like music like Autechre you will know what I mean. The music and sound is one of the best things about old Who. I see that there are more releases on the way including The Daleks from the Hartnell era which I will definitely pick up too.
Read more
One person found this helpful
Helpful
Comment Report abuse

DVD Collector
5.0 out of 5 stars The Krotons soundtrack
Reviewed in the United Kingdom on 7 July 2018
Verified Purchase
Great sound effects from an underrated story from 50 years ago!
Read more
Helpful
Comment Report abuse

Phill
5.0 out of 5 stars Fantastic EP!
Reviewed in the United Kingdom on 25 January 2018
Verified Purchase
Fantastic EP, a MUST for any classic Dr Who fan!
Read more
One person found this helpful
Helpful
Comment Report abuse

Terry Carroll
5.0 out of 5 stars Better than my amateur version.
Reviewed in the United Kingdom on 27 August 2013
Verified Purchase
I'm old enough to remember the original transmission of this story and I recorded the soundtrack at the time by fixing a microphone to the speaker of the television. So I know the music and effects quite well but this version is much higher quality than my recording.
Read more
Helpful
Comment Report abuse

Paul Wilcox
3.0 out of 5 stars DIDDLY-DUM, DIDDLY-DUM, BUZZ, WIRRRR, CHIRRUPP, DIDDLY-DUM
Reviewed in the United Kingdom on 4 October 2013
Verified Purchase
As a show I like the Krotons. I will always think of it as one of the better Troughton stories although I am not of the age to have seen any wiped stories on original transmission.

I have this because I have all WHO sountrack albums..... but you have to really want this or at least appreciate you won't be getting much enjoyment out of it. It's certainly not something one could put on in the background as:-

a, it doesn't even run 30 minutes
b, it's pretty much all atmospheric tones and noises
c, you must expect the comments "what's that rubbish you're listening to"? Your cred won't improve when you tell them.

However, it IS nostalgic; it IS interesting enough to listen to and visual the scenes involved; t IS DOCTOR WHO!!!

J. M. Edwards
3.0 out of 5 stars krispy krotons
Reviewed in the United Kingdom on 6 August 2014
Verified Purchase
actually this is a bridge too far for me. there was a time when i would have had to have had this but to all intents and purposes it is an unpleasant listen of bizarre ambient noises and early synth sounds. for completists only i feel.
Read more
Helpful
Comment Report abuse
See all reviews from the United Kingdom

T.G.I.
5.0 out of 5 stars Limited Funds, Excellent Composition
Reviewed in the United States on 23 July 2013
Verified Purchase
'Doctor Who: The Krotons'
Story 047
By: Robert Holmes

This is the soundtrack to the Doctor Who story 'The Krotons', as you probably have guessed based on the product name and my apt description above. The story itself isn't that bad and the Krotons are pretty cool, but due to budgetary constraints put on the season it premiered in (Season 6), some stories had to have their funds cut short and this is one of the stories where that happened. Because of that, they couldn't afford to compose new music for the story, but they could squeeze out enough money for Brian Hodgson, head of the BBC Radiophonic Workshop, to make sound effects instead for it. Besides the usual title sequence, this story had only special sounds instead of the usual orchestral background music and it made the story have a different feel from those previous. This soundtrack has tried (and in my opinion, succeeded) to capture that feeling onto a compacted disc and allow you to hear it. Admittedly, these range of classic series soundtracks are not for everyone and in particular this one because it basically doesn't contain music. What it does contain is a half-an-hour (I said limited funds) of cool, other-worldly sounds that you would be more than happy with hearing today in a sci-fi show. Again, it is not for everyone, but I greatly admire this soundtrack and can't wait for the next one.

Page 1 of 1 Start overPage 1 of 1
This shopping feature will continue to load items when the Enter key is pressed. In order to navigate out of this carousel please use your heading shortcut key to navigate to the next or previous heading.
Back
Next
Pages with related products. See and discover other items: silva screen
Unlimited One-Day Delivery and more
Prime members enjoy fast & free shipping, unlimited streaming of movies and TV shows with Prime Video and many more exclusive benefits.
> Get Started