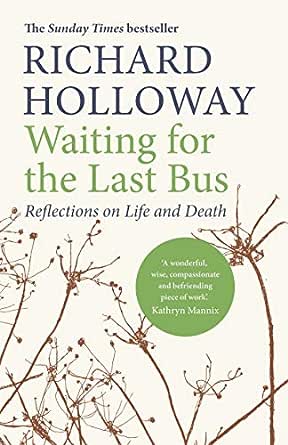 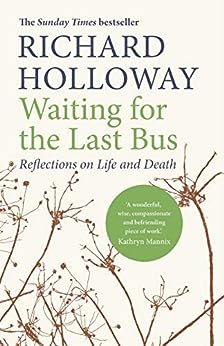 Waiting for the Last Bus: Reflections on Life and Death Kindle Edition

Page 1 of 1 Start overPage 1 of 1
This shopping feature will continue to load items when the Enter key is pressed. In order to navigate out of this carousel please use your heading shortcut key to navigate to the next or previous heading.
Back
Next
Amazon Business : For business-exclusive pricing, quantity discounts and downloadable VAT invoices. Create a free account
Also check our best rated Biography reviews

"Thought-provoking, revelatory, grave and comforting. It is impossible not to be moved by it in the most profound way" (ALEXANDER McCALL SMITH)

"An inclusive and hugely nourishing reminder to take stock of our mortality . . . Elegant, elegiac and thought-provoking" (Observer)

"Holloway writes with passion and honesty at all times, and the result is compelling" (Guardian)

"Every bit as meditative, witty and elegiac as you would expect" (Scotsman)

"The record of a mind too large, too curious and far too generous to be confined within any single religious denomination" (PHILIP PULLMAN)

"A wise, compassionate perspective on a persistently taboo subject. The pragmatism and gentle humour make it an unusually inclusive book. For everyone, however young" (COLIN FIRTH)

"Thoughtful, playful, courageous and deeply altruistic . . . a fine companion for anyone who wishes to live a life of any depth" (A.L. KENNEDY)

"A wonderful, wise, compassionate and befriending piece of work" (KATHRYN MANNIX, author of With the End in Mind)

"Written with the integrity, intelligence and wit that we expect from Richard Holloway" (KAREN ARMSTRONG) --This text refers to the hardcover edition.

Richard Holloway was Bishop of Edinburgh and Primus of the Scottish Episcopal Church. A former Gresham Professor of Divinity and Chairman of the Joint Board of the Scottish Arts Council and Scottish Screen, he is a fellow of the Royal Society of Edinburgh. Leaving Alexandria won the PEN/Ackerley Prize 2013 and was shortlisted for the Orwell Prize 2013. Holloway has written for many newspapers in Britain, including The Times, Guardian, Observer, Herald and Scotsman. He has also presented many series for BBC television and radio; Waiting for the Last Bus originated as a five-part series on Radio 4 in 2016. --This text refers to the hardcover edition.

A moving and profound exploration of life's greatest mystery from one of the most revered religious figures of our time --This text refers to the hardcover edition.
Read more

Page 1 of 1 Start overPage 1 of 1
This shopping feature will continue to load items when the Enter key is pressed. In order to navigate out of this carousel please use your heading shortcut key to navigate to the next or previous heading.
Back
Next
click to open popover
Unlimited One-Day Delivery and more
Prime members enjoy fast & free shipping, unlimited streaming of movies and TV shows with Prime Video and many more exclusive benefits.
> Get Started