Ultramarathon Man: Confessions of an All-Night Runner and over 8 million other books are available for Amazon Kindle . Learn more
Share <Embed>
Have one to sell?
Sell on Amazon 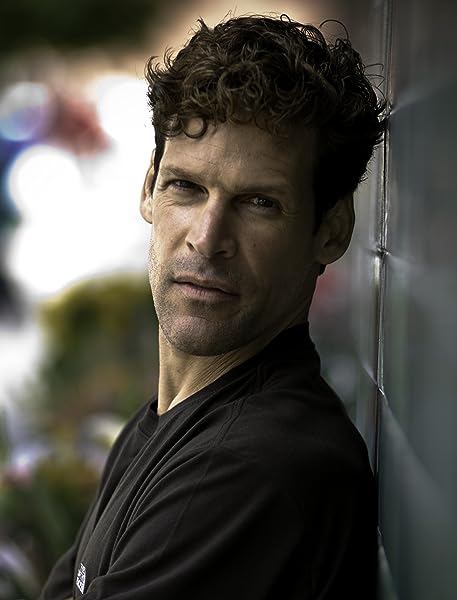 Start reading Ultramarathon Man: Confessions of an All-Night Runner on your Kindle in under a minute.

Full of euphoric highs...a journey into distance running that is much less about sweat than about the emotional terrain that unfolds at the frontier of endurance., New York Times

An exhibition of unadulterated courage and mental and physical stamina [for] anyone who likes to read about ordinary people doing extraordinary things., Boston Globe

The inspiring story of Dean Karnazes, an internationally recognised endurance athlete who has pushed his body and mind to inconceivable limits.

Dean Karnazes has been declared one of the 'Top 100 Most Influential People in the World' by TIME magazine and he has been featured in Runner's World, TIME, Newsweek, People, GQ, The New York Times, USA TODAY, The Washington Post, Forbes, and many others. He's travelled the TV and radio circuits as well, logging miles on The Today Show, 60 Minutes, The Late Show with David Letterman, CNN, ESPN, NPR's Morning Edition, and the BBC, among others. He lives in California.
Read more

4.7 out of 5 stars
4.7 out of 5
539 customer ratings
How does Amazon calculate star ratings?
Amazon calculates a product’s star ratings based on a machine learned model instead of a raw data average. The model takes into account factors including the age of a rating, whether the ratings are from verified purchasers, and factors that establish reviewer trustworthiness.
Top Reviews

I'm sure some people would love this read but it ended up boring me. I recycled it before I finished it.

Mr. Andrew Peers
5.0 out of 5 stars Buy it, you won't be disappointed
Reviewed in the United Kingdom on 11 May 2018
Verified Purchase
Read this over the course of 2 or 3 days and loved every bit of it. Although I am nowhere near Dean in terms of fitness and running ability, the fact that he didn't take up ultra running until his early 30's is inspiring and proves it isn't all about people in their late teens and twenties (Dean didn't run from around age 15 to 30).

The strange joy he takes from pain is something I can associate with when it comes to running. "If it doesn't hurt, you aren't doing it right" is something I have always lived by with my racing. He shows he is a man with great heart and love for his family and also complete strangers with his fundraising efforts. A great read that I would thoroughly recommend.

Amazon Customer
2.0 out of 5 stars Interesting read but...
Reviewed in the United Kingdom on 15 June 2017
Verified Purchase
Clearly the man has a ridiculous pain threshold and has achieved things that only some of us can dream about in the running world...saying that he isn't afraid to pat himself on he back regularly throughout this book...about every 10 lines which becomes tiring. There's no doubt some of his tales of running vast distances in some hideous conditions are captivating but there is a lot to be said for a touch of humility which is sadly lacking here.
Read more
6 people found this helpful
Helpful
Comment Report abuse

Mr A M Q
4.0 out of 5 stars Crazy dude
Reviewed in the United Kingdom on 16 October 2013
Verified Purchase
I don't know how this guy does it. Running the amount of miles he does, the frequency of his runs and I bought this book thinking it'll help me get a bit more active and get some sort of inspiration from this book. This guy is unique, he writes well, inspires and you feel the pain with him when he describes the running events he's done or when he just goes out for a run for the fun of it. Its interesting to see how he juggles the running around his work life and family life, it was interesting to read how it all started when he was just a child running to school.

I thoroughly enjoyed this book and its right what some people have said it'll definitely get you out and about for a run.

wte
5.0 out of 5 stars Entertaining and inspirational!
Reviewed in the United Kingdom on 18 September 2017
Verified Purchase
Fantastic - this book will inspire you to go beyond your perceived boundaries! Certainly it will entertain you! I read it after completing a marathon and I realised I could do more... ended up doing the Marathon des Sables! A fantastic experience that has brought confidence and adventure to other areas of my life.

Whatever your personal challenge or perceived limits, it is worth a read as Dean is a great writer!

Adam Browne
5.0 out of 5 stars Inspiring
Reviewed in the United Kingdom on 28 May 2018
Verified Purchase
This is a well written book that puts you in the moment. It is inspiring and if you are interested in running or ultras then you will like it but I would recommend this to everyone, as a book which goes far beyond running and is about the human spirit and mental strength
Read more
Helpful
Comment Report abuse

Mrs C E Bryant
3.0 out of 5 stars ultramarathon man confessions of an All-NIght runner
Reviewed in the United Kingdom on 5 June 2012
Verified Purchase
As a teeny weeny beginner I was obviously impressed by the sheer mammoth achievements that this man has made, The book was well written and it kept me enthralled until the end, well perhaps enthralled is a poor description. More gobsmacked. I read it in a day but I must say the thing that struck me most about both the endevour and the writing about it, was how selfish the writer was. Me me me.....Having said that it obviously works for him. I'm glad I didn't marry anyone like this but applaud his grit determination.Its a hard book to mark because it kept me interested and I read it fast but somehow the author leaves a nasty taste,
Read more
4 people found this helpful
Helpful
Comment Report abuse
See all reviews from the United Kingdom

Gabriel dos Santos Goncalves
5.0 out of 5 stars Simply inspiring
Reviewed in Brazil on 16 November 2019
Verified Purchase
We see Dean Karnazes on many documentaries on TV and YouTube, but by Reading this book you get the real sense of the man behind the legend. Great stories and so many lessons for you to take with you.
Read more
Helpful
Sending feedback...
Thank you for your feedback.
Sorry, we failed to record your vote. Please try again
Report abuse

Matt K.
5.0 out of 5 stars Planning on running ultras? Read this.
Reviewed in Germany on 29 January 2018
Verified Purchase
First off, this book is about Dean's personal experiences as ultra runner, not about a step-by-step guide to ultra running. It's full of personal anecdotes and stories but makes you want to instantly put your running shoes on and hit the road. Also, you get some hints throughout the book about the required logistics behind running ultras in addition to basic but important nutritional advice at the end. Highly recommended!
Read more
Helpful
Sending feedback...
Thank you for your feedback.
Sorry, we failed to record your vote. Please try again
Report abuse
Translate review to English
Load more international reviews

Arley
5.0 out of 5 stars Inspirating
Reviewed in Brazil on 26 January 2020
Verified Purchase
It is a good story. Running is something from the mind and soul than purely phisical. Dan is an example of this, running more than 200 miles...it is a good life example not only for athletes, but also everyone with a life purpose.
Read more
Helpful
Sending feedback...
Thank you for your feedback.
Sorry, we failed to record your vote. Please try again
Report abuse

Naveen
5.0 out of 5 stars One Word: Amazing
Reviewed in India on 10 February 2020
Verified Purchase
Reading this book was equivalent to watching a thriller movie. I loved the composition how it made you indulge. It felt like I was there with him. An uber athlete and a beautiful human. A definite must read.
Read more
Helpful
Sending feedback...
Thank you for your feedback.
Sorry, we failed to record your vote. Please try again
Report abuse
Load more international reviews

Mukesh
5.0 out of 5 stars Inspiring
Reviewed in India on 14 December 2018
Verified Purchase
Dean is so humble and straight to the point. He don't pose himself as a superhuman, but just as a layman next door, and the transformation to the most loved ultra runner today.
Read more
Helpful
Sending feedback...
Thank you for your feedback.
Sorry, we failed to record your vote. Please try again
Report abuse

Itacir Franceschini
4.0 out of 5 stars Inspiring
Reviewed in Brazil on 10 April 2019
Verified Purchase
Excellent book. Really nice to see the possibilities of overcoming yourself.
Read more
Helpful
Sending feedback...
Thank you for your feedback.
Sorry, we failed to record your vote. Please try again
Report abuse