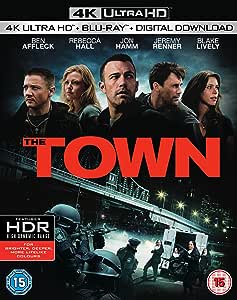 Add to Basket
£20.56
+ FREE delivery
Sold by: Chalkys UK - All UK orders sent Royal Mail tracked
Have one to sell?
Sell on Amazon

As he plans a job that could result in his gang’s biggest score ever, a longtime thief plans a way out of the life and the town while dodging the FBI agent looking to bring him and his bank-robbing crew down. In addition to heading an electrifying cast, Ben Affleck also directed and co-wrote this suspenseful, critically acclaimed crime thriller that unfolds – and often explodes – across gritty Boston locations. Rebecca Hall, Jon Hamm, Jeremy Renner, Blake Lively, Titus Welliver, Pete Postlethwaite and Chris Cooper also star.

4.5 out of 5 stars
4.5 out of 5
191 customer ratings
How does Amazon calculate star ratings?
Amazon calculates a product’s star ratings based on a machine learned model instead of a raw data average. The model takes into account factors including the age of a rating, whether the ratings are from verified purchasers, and factors that establish reviewer trustworthiness.
Top Reviews

P. WILLIAMS
5.0 out of 5 stars Not to be missed
Reviewed in the United Kingdom on 1 October 2016
Verified Purchase
I have to say that I was almost put-off buying this film because I thought the title 'The Town' was too crass. However, I DID buy it and how happy I am that I did. In my own humble opinion this is a standout movie and deserves to be mentioned at the same time as 'Ronin' or 'Heat'. The action goes from the first minute and doesn't stop until the last scene. Robbery, Murder, Conspiracy and Romance ALL have their place and their part to play in this gritty film, directed brilliantly by Ben Affleck. The casting was perfect with Affleck leading a team of armed robbers whose hits grow evermore dangerous as the prize increases. Jeremy Renner is a borderline psycopath and plays his part very convincingly.The late British actor Pete Postlethwaite is the man who provides all the info. Co-stars include Jon Hamm as the FBI Agent on the case, Blake Lively who sells them out, Rebecca Hall the love interest and Chris Cooper.
Read more
2 people found this helpful
Helpful
Comment Report abuse

davana
3.0 out of 5 stars Action packed.
Reviewed in the United Kingdom on 20 March 2019
Verified Purchase
Not much interest to this film to hold the attention for long. Usual Hollywood action film. Nothing special.
Read more
2 people found this helpful
Helpful
Comment Report abuse

C.Elder
5.0 out of 5 stars Robbers vs. Cops
Reviewed in the United Kingdom on 29 January 2012
Verified Purchase
This is a terrific film . Affleck has confounded all those who thought he had no talent other than being Matt Damon's pal. He can direct, and manages to keep a high level of tension while the story unfolds in multiple directions covering his parents and their relationship as well as his growing up.The evil spider at the centre of this complex web is the great, late, Peter Postlethwaite (who made this shortly before his death). He plans all the robberies in detail and holds sway over the gang that executes his detailed plans,ruling them with an iron fist.When Affleck tries to break away, he is reminded just why he is trapped, in a terrible way that stretches all the way back to his mother whome he thought abandoned the family when he was a child.
A great film.

Book Mad
4.0 out of 5 stars A powerful, grown up film, a credit to its creators
Reviewed in the United Kingdom on 27 July 2011
Verified Purchase
This film is a revelation if you think Ben Affleck is just another Hollywood beefcake and not much else. It is beautifully directed, the performances, from the main leads down to the smallest bit parts, are all three dimensional, real people. The camera work is sparingly done, shots that tell you exactly enough to get the point and move on to the next, as well told as any Billy Wilder or Sidney Lumet film (two of my personal top ten favourite directors).

The Town is a sad story of love, greed and loss. It is about a group of people living with that perpetual anger that apparently is the lot of police and villains, anyway according to Hollywood, but set in contrast to ordinary citizens and their enviable lives of peaceful neighbourliness. It is a real life story (rare in Hollywood these days). It has a nuanced understanding of the human heart that makes it a film you can watch many times and still find new details, and go back after a while and it is as fresh as the first time. Recommended highly.

LONDON NINJA.
4.0 out of 5 stars Good...
Reviewed in the United Kingdom on 5 August 2014
Verified Purchase
a very good tight heist thriller... there is no Hollywood "filler"
subplots here... this is straightforward storytelling... I can't
think of a bad thing to say about it... Ben Affleck, really studied
the Irish-American culture of Boston... me being a Londoner,
with a Cockney accent, I still couldn't get some words in Boston
English... and that is a good thing...

Andrew Nisbet
3.0 out of 5 stars Save your money
Reviewed in the United Kingdom on 23 April 2020
Verified Purchase
Only slightly better than normal blu ray version.

I wanted it to be better, but honestly its barely any different.
Read more
Helpful
Comment Report abuse

Tightfisted
4.0 out of 5 stars Well don Ben (again)
Reviewed in the United Kingdom on 30 March 2018
Verified Purchase
Plenty of synopsis, reviews and ratings available on the www.
I'd say this is another good example of Ben Affleck's considerable skills as Writer/Actor/Director.
Read more
One person found this helpful
Helpful
Comment Report abuse
See all reviews from the United Kingdom

Alex
4.0 out of 5 stars Good, But Missing Some Scenes
Reviewed in the United States on 1 November 2016
Verified Purchase
Was a great movie for this kind of theme. Had a problem, though: There were some scenes missing (Doug & Claire on the boat, for instance), which I found greatly aggravating. Anyone know what's up with that? Is there a different cut or something I'm not seeing? The movie was good this way, but it was actually improved by those scenes. It really build things up a bit better somehow.
Read more
Helpful
Sending feedback...
Thank you for your feedback.
Sorry, we failed to record your vote. Please try again
Report abuse

John P.
1.0 out of 5 stars Poor SHIPPER
Reviewed in the United States on 25 January 2017
Verified Purchase
This DVD did not play. The shipper failed to replace or refund it. The DVD was for a different region. The issue is with the SHIPPER
Read more
Helpful
Sending feedback...
Thank you for your feedback.
Sorry, we failed to record your vote. Please try again
Report abuse