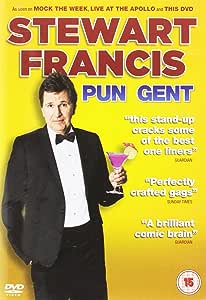 Stewart Francis (Actor) Rated: Suitable for 15 years and over Format: DVD
4.2 out of 5 stars 68 ratings
Amazon's Choice recommends highly rated and well-priced products.
Amazon's Choice for "stewart francis"
Note: This item is eligible for click and collect. Details
Pick up your parcel at a time and place that suits you. How to order to an Amazon Pickup Location? Learn more

Stewart Francis, the star of Mock The Week, Michael McIntyre's Comedy Roadshow and Live At The Apollo embarks on a brand new stand-up tour, starting in Spring 2015 and extended into 2016 after phenomenal demand with his fantastic, hilarious new show Pun Gent!

Stewart has devoted this show to his father, who was a roofer. So dad if you're up there? He and his wife have decided they don't want kids. If any one does, they can drop them off tomorrow. Oh he's just kidding of course, he has a beautiful daughter who he named after his mum, and in fact passive aggressive psycho turns five tomorrow. On an unrelated matter, Stewart likes what mechanics wear... overall.

With Stewart Francis it's all about puns. And he's a gent. If time is money, Stewart's the man to do your shopping for he'll fill every minute with comedy bargains in the form of non-stop quick-fire gags, rarely giving you time to cease giggling until the next one starts. And it's not cheap produce either, previous goods winning awards such as Dave's Funniest Joke Of The Fringe Award 2012 and earning him a reputation as one of the finest comics around. Quite simply, the service Francis provides is good old-fashioned joke telling with a hook, punch-line and a dose of panache thrown in for good measure. So where's the catch? Well there probably is a pun-related answer, but only word wizards such as Stewart Francis could find one.

'A brilliant comic brain... this stand-up cracks some of the best one liners I've ever heard' - THE GUARDIAN

4.2 out of 5 stars
4.2 out of 5
68 global ratings
How are ratings calculated?
To calculate the overall star rating and percentage breakdown by star, we don’t use a simple average. Instead, our system considers things like how recent a review is and if the reviewer bought the item on Amazon. It also analyses reviews to verify trustworthiness.
Top reviews

It's me
2.0 out of 5 stars Disappointing.
Reviewed in the United Kingdom on 27 November 2019
Verified Purchase
Disappointing. He seems to have slowed down over the years. His comedy used to be faster and punchier. Now, it just feels like he's delivering a line and waiting for the audience to laugh..... no matter how long it takes. He even stopped his excruciatingly slow routine to explain some of his jokes.
This is a man with fresh and good material. Sadly, not on display in this show.
I couldn't bring myself to watch it all even though I was REALLY bored at the time.

M.I
3.0 out of 5 stars Not bad
Reviewed in the United Kingdom on 12 January 2020
Verified Purchase
He’s a funny guy but this was a bit cringe inducing. Lots of it is just him standing looking at the crowd. A bit slow-paced, too. Not as good or funny as I expected.
Read more
Helpful
Comment Report abuse

Vicki Anderson
5.0 out of 5 stars You either like him or you don't. I do.
Reviewed in the United Kingdom on 1 November 2019
Verified Purchase
Stewart Francis, king of one- liners.
Read more
One person found this helpful
Helpful
Comment Report abuse

Average white male
4.0 out of 5 stars Great comedy from the master of the pun.
Reviewed in the United Kingdom on 5 February 2017
Verified Purchase
Wonderfully dry stand-up from one of my favourite comedians.
I saw this show live 1 year prior to purchasing the DVD, it was as funny as I remember.
I didn't score it a 5 because it is a bit slow-paced compared to his previous 2 DVDs, it is on the short side (just over 1 hour) and there are no extras, but if you know and like Stewart's style, you won't be disappointed.

M. A. Thomson
2.0 out of 5 stars Don’t bother
Reviewed in the United Kingdom on 9 April 2018
Verified Purchase
Not as funny as I hoped to the point where it got annoying and stopped watching
Read more
2 people found this helpful
Helpful
Comment Report abuse

al b
3.0 out of 5 stars Worth a watch if you're a fan
Reviewed in the United Kingdom on 1 May 2019
Verified Purchase
Hilarious in parts and a few bits that were meh. Funnier than his outstanding in his field DVD buy not quite as good as tour de francis.
If you're a fan like I am you'll enjoy it for the most part.

Biro
5.0 out of 5 stars Something for everyone to enjoy
Reviewed in the United Kingdom on 22 March 2018
Verified Purchase
The pun master ! If you haven't seen him, try it out bcause you'll love it.
Read more
One person found this helpful
Helpful
Comment Report abuse
See all reviews
Pages with related products. See and discover other items: josh widdicombe, milton jones, alan davies
Unlimited One-Day Delivery and more
Prime members enjoy fast & free shipping, unlimited streaming of movies and TV shows with Prime Video and many more exclusive benefits.
> Get Started