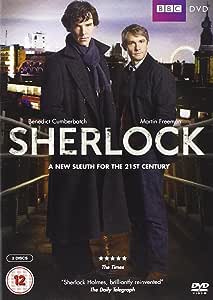 John Watson: doctor, soldier, war hero, lost soul. Fresh from fighting the war in Afghanistan, a chance encounter brings him into the world of Sherlock Holmes: loner, detective, genius. A woman in pink lies murdered in an abandoned house. The fifth victim of a seemingly motiveless killer. Inspector Lestrade is the best Scotland Yard has got. But he knows he’s nothing compared to a young man called Sherlock. Sherlock can tell a software designer by his tie, an airline pilot by his thumb. He has a unique analytical brain unlike anyone else in the world, who earns his living and staves off boredom by solving crimes. The weirder and more baffling the better…

The two men couldn’t be more different, but Sherlock’s inspired leaps of intellect coupled with John’s pragmatism soon forge an unbreakable alliance. Across three, 90-minute, thrilling, scary, action-packed and highly entertaining television movies, Sherlock and John navigate a maze of cryptic clues and lethal killers to get at the truth.

The world’s favourite detective has come out of the fog. With sparkling scripts and unforgettable performances from the two leads, this is Sherlock for a new generation. This set contains all three episodes and the original Pilot.

In the wake of Guy Ritchie's re-imagining, the BBC puts its own stamp on Arthur Conan Doyle's sleuth--and sets him in a London filled with cell phones and laptops. In the pilot, director Paul McGuigan (a keen visual stylist) introduces Sherlock Holmes (Atonement's Benedict Cumberbatch) as a "high-functioning sociopath" and Dr. John Watson (The Office's Martin Freeman) as an army veteran with post-traumatic stress disorder. Through a mutual friend, the two become flatmates at 221B Baker Street (Una Stubbs plays their landlady). Holmes, who consults with Scotland Yard inspector Lestrade (Rupert Graves) on his trickier cases, drafts Watson to assist him.

In "Study in Pink," four people commit suicide by poison. When Holmes sets out to establish a link, he falls right into the culprit's clutches. Other cases concern a smuggling operation ("The Blind Banker") and a mad bomber ("The Great Game"). Though he doesn't make a formal entrance until episode 3, Sherlock's archenemy, Moriarty (Andrew Scott), has a hand in each mystery, while the detective's brother, Mycroft (co-creator Mark Gatiss), first appears when he tries to hire Watson as a spy, an offer the good doctor refuses. Through his job at a medical office, Watson also meets Sarah (Zoe Telford), who becomes his girlfriend.

Part of the fun of Jeremy Brett's Holmes (and Agatha Christie's Poirot) came from the period details, so this update takes a little getting used to--as does the occasional mumbled line--but Cumberbatch and Freeman share an enjoyable Odd Couple rapport, marked by flashes of deadpan wit, which compensates for the absence of deerstalker caps (Holmes favors scarves) and journals (Watson maintains a website). Extras include commentary on the finale, the original pilot, and a featurette, in which co-creator Steven Moffat (Doctor Who) notes that Cumberbatch was his only choice for the title role. --Kathleen C. Fennessy

Page 1 of 1 Start overPage 1 of 1
This shopping feature will continue to load items when the Enter key is pressed. In order to navigate out of this carousel please use your heading shortcut key to navigate to the next or previous heading.
Back
Next
Pages with related products. See and discover other items: bbc sherlock
Unlimited One-Day Delivery and more
Prime members enjoy fast & free shipping, unlimited streaming of movies and TV shows with Prime Video and many more exclusive benefits.
> Get Started