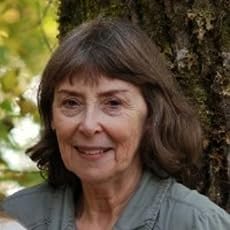 Follow to get new release updates and improved recommendations
Sharon McGregor is a west coast transplant from the Canadian prairies, on a mission to escape the cold. Her imagination and story weaving got its start when she was an only child living on a farm. She's moved on from cowgirl dreams to romance and mystery, but hasn't lost her love for horses. She writes humour, romance and cozies, sometimes a combination of all three.
When not writing or reading she is busy walking the dogs along the ocean.
In spite of her attempts to escape winter, she loves watching her grandchildren at figure skating and hockey.
The main item not yet ticked on her bucket list is travel. She wants to set her foot on six continents-she'll give Antarctica a pass, thank you.
Read more 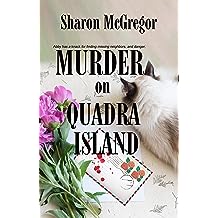 Murder on Quadra Island 25-Nov-2019
by Sharon McGregor
( 1 )
£2.31 £5.95
Abby has returned to live in her home town on Vancouver Island. With her old friend Summer, she begins to search for a missing and reclusive neighbor. When their sleuthing finally leads them to the neighbor, it also leads them to a body.

Along the way they run into a stream of suspects but aren't sure the police have zeroed in on the right one. A newly released felon, a bereaved mother anxious to make amends, an abused ex-wife, a wandering cat, and a man from the city's crime underbelly all seem to feel Abby and Summer can help them. Abby's family is adamant she stay out of this investigation, but, once again, Abby gets swept along in the undercurrents of murder.

Will her curiosity lead her too far this time?
Read more
Other Formats: Paperback 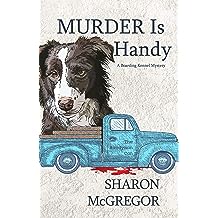 Murder is Handy 16-May-2019
by Sharon McGregor
( 1 )
£2.34 £5.95
Taylor Armstrong is once more involved in a small town murder of Jonah Whitcomb, Badger Lake's local handyman, as she becomes the confidante of more than one suspect. Between keeping tabs on the investigation and trying to decipher RCMP
Sergeant Andrew Scott’s changing attitude to their relationship, she has her hands full.

When Taylor becomes a little too involved with one of the suspects, she is thrown into danger. Andrew races to keep one step ahead of her. Now he is in a fight to keep her safe and collar a killer.

About the Author: Sharon McGregor

Sharon McGregor is a west coast transplant from the Canadian prairies, on a mission to escape the cold. Her imagination and story weaving got its start when she was an only child living on a farm. She's moved on from cowgirl dreams to romance and mystery, but hasn't lost her love for horses.
She writes humour, romance and cozies, sometimes a combination of all three. When not writing or reading, she is often found walking the dogs along the ocean. In spite of her attempts to escape winter, she loves watching her grandchildren at figure skating and hockey. The main item not yet ticked on her bucket list is travel. She wants to set her foot on six continents—she'll give Antarctica a pass, thank you. 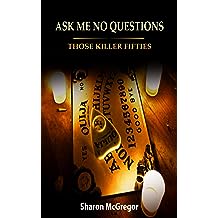 Ask Me No Questions: Those Killer Fifties 05-Sep-2017
by Sharon McGregor
( 4 )
£2.31
Laura Somerville is a bored 1950s housewife. She picks an unusual and dangerous hobby to relieve the monotony of her village life—collecting secrets that her fellow Gander Lake citizens would prefer to keep private. Mostly they are embarrassing rather than dangerous secrets. But did she finally uncover one more deadly? At a dinner party she uses the cover of a parlour game, a Ouija Board, to poke and pry, enjoying the discomfort of her guests. When her husband finds Laura dead beside the back lane garbage bins, Sgt. Ramsey is faced with the dual sides of a small town. Everyone appears to know everything about everybody, and yet, secrets lie beneath the surface. Deadly secrets.
Read more 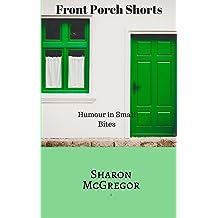 Front Porch Shorts: Humour In Bite Size 09-May-2017
by Sharon McGregor
( 2 )
£0.99
A family funeral, a rogue mosquito, a night class at the high school, a large white rabbit, and a Chamber dinner all lead to sticky situations for Hannah and George in this collection of short humorous stories.

Five Can Keep a Secret 30-Apr-2017
by Sharon McGregor
( 3 )
£2.31
Five college friends meet for a reunion in an isolated cottage in the lake area. Caught off-balance by an unexpected snow-storm, they settle in to make the best of their time together. Along with Will, Jennifer's cousin who is also storm bound, they begin to reminisce about their college life. It becomes apparent that they all have secrets they would prefer to keep hidden. Then one of them has a terrible accident—or is it? A second death soon answers that question. What secret could possibly warrant a death sentence? And who will be next? The remaining friends can trust no one.

About the Author: Sharon McGregor

Sharon McGregor is a west coast transplant from the Canadian prairies, on a mission to escape the cold. Her imagination and story weaving got its start when she was an only child living on a farm. She's moved on from cowgirl dreams to mystery and romance, but hasn't lost her love for horses. She writes humor, romance and cozies, sometimes a combination of all three.

When not writing or reading she is busy working in a shop she owns with her daughter, or walking the dogs along the ocean.

In spite of her attempts to escape winter, she loves watching her grandchildren at figure skating and hockey.

The main item not yet ticked on her bucket list is travel. She wants to set her foot on six continents-she'll give Antarctica a pass, thank you. 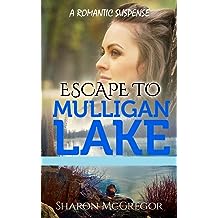 Escape To Mulligan Lake: A Romantic Suspense 28-Feb-2017
by Sharon McGregor
( 3 )
£2.41
Marni is beginning her summer holiday from teaching, but she soon discovers it's not the relaxing time she'd hoped for. Notes left on her windshield, flowers delivered into her locked apartment, and phantom deliverymen leave her apprehensive. Police don't seem to take it seriously. Then it kicks up a notch. Her car is vandalized and her cat Caesar is poisoned. She soon discovers Greg, whom she meets through her best friend Claire, is one policeman who wants to keep her safe. He also has an amazing affect on her heart rate. Marni is afraid her stalker will turn on her friends and decides to escape to an isolated cottage at a Vancouver Island lake. but will her stalker follow?
Read more 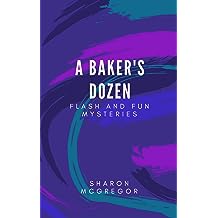 A Baker's Dozen: 13 Flash and Fun Mysteries 16-Oct-2016
by Sharon McGregor
( 3 )
£0.99
A woman whose hobby leads her into danger, a little trouble with the neighbours, three sisters who know how to handle troublemakers, hidden wills, paste pearls, secrets and betrayal, and a pastiche in honour of The Dame are amongst tales included in this Baker's Dozen of short mysteries. So find a comfy spot, a little light refreshment and get cozy with these flash and fun stories.
Read more 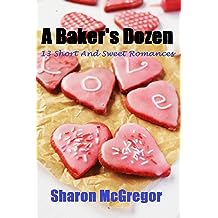 A Baker's Dozen: 13 short and sweet romances 03-Oct-2016
by Sharon McGregor
( 1 )
£0.99
Prince Charming can pop up in the oddest places-a Fix-It shop, a War Museum or a hospital bed— even next door. These short romances are meant for those who enjoy a quick read, a sweet romance and a HEA. So pull up an easy chair, pour a cup of Earl Grey, grab a bowl of chocolate bon-bons and dive in.
Read more 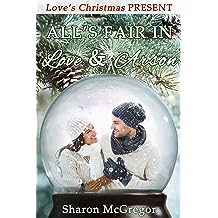 All's Fair in Love and Arson (Christmas Holiday Extravaganza) 01-Dec-2015
by Sharon McGregor
( 2 )
£1.90
Bella is back at her childhood home. When her mother took a fall in the Nuisance Grounds (garbage dump) and broke her leg, Bella came back to help her and run her shop, Izzie's. Soon Bella discovers she's also been handed Izzie's role in the town's Christmas theatre production, a musical version of a well-known mystery that threatens to become more bizarre each day. A serial arsonist is frightening the townspeople, a family feud threatens young romance, and intrigue and rumors are the order of the day. On top of everything, Bella's high school sweetheart Jake, who dumped her for a cheerleader, is now Chief of Police. Poor Bella! Christmas in St. Christopher's is not what it used to be.
Read more 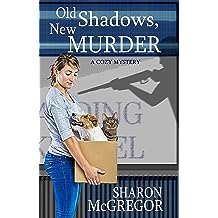 Old Shadows, New Murder 18-Sep-2015
by Sharon McGregor
( 1 )
£3.06 £5.95
Taylor Armstrong returns to her hometown to bury her Aunt Grace and soon finds herself the focus of unwanted attention. The town seems to have an unhealthy interest in whether she is staying or leaving. Her house is broken into - twice. Unexpected visitors begin to arrive, including Taylor’s long-estranged father.

She enlists the help of her neighbor, Edie, and her Jack Russell Terrier, Tristan, to find answers, but new murders put Taylor right in the center of the action.

When old shadows part to reveal secrets long buried, Sgt. Scott of the RCMP does his best to keep Taylor safe. But can he succeed against a single-minded killer?
Read more
Other Formats: Paperback 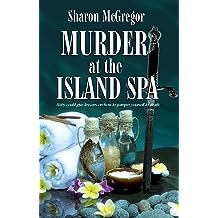 Murder at the Island Spa 24-Aug-2015
by Sharon McGregor
( 3 )
£3.06 £5.95
Abby is heading into danger once more. This time the call for help comes from her daughter, Mandy. Abby wastes no time flying to Vancouver Island to the rather unusual resort, where Mandy has been staying for a holiday with Abby's ex-husband Richard and Kelly, his fiancée.

While trying to stop her ex husband from being framed for murder, Abby must delve into the past of a long lost mother, a tyrant patriarch, a flaky medium and an Adonis masseur, not to mention some uncooperative family members. Abby planned on spending Christmas Eve on a tropical island with her new love, Neil. Instead, she is fighting for her life in a New Age Spa. 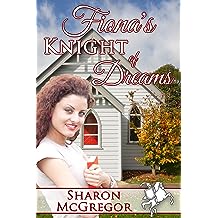 Fiona's Knight of Dreams 03-Jun-2015
by Sharon McGregor
( 8 )
£2.31
The good ladies of Timber are ready to find a wife for their new single minister. Charles has ideas of his own when he meets Fiona, the lovely accident-prone and outspoken part-time librarian. Fiona, on the other hand is holding out for a knight on a white charger to carry her away from her humdrum small town life. Fiona and Charles are thrown together as they begin to solve an old mystery which has turned up in a library book. Will Fiona's white knight ever show up to sweep her away? Will Charles ever run out of invitations for cream cakes and lemon slice? Fiona might just discover the sound of hoof-beats when she least expects it.
Read more