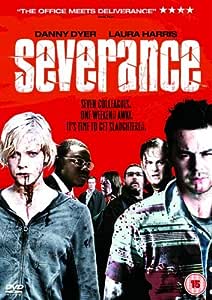 Suspenseful comedy thriller. Palisade Defense is a company that truly cares about its employees. When the company's European sales division exceeds expectations, the president decides that his dedicated employees deserve a relaxing, corporate team-building retreat. The trip takes a turn for the worst, however, when a deadly enemy infiltrates the retreat with the singular goal of ensuring that no one gets out alive.

If a weekend of team building exercises in the woods sounds like your personal idea of torture, spare a thought for the poor pen pushers of Severance. As if the obligatory paintball and trust exercises werent enough, theres a killer lurking outside their cabin--a killer holding a grudge against the unsuspecting employees of Palisade Defense...

Severance is one of the best British horror movies to come out of the last couple of years. Its smarter than it has any right to be; screenwriter James Moran neatly sidesteps the numerous clichés littering the genre, balancing eye-watering gore with almost surreal humour, while Creep helmer Chris Smiths assured direction sells even the daftest (and cruellest) moments.

Horror fans will lap this up; those lacking an iron stomach might watch some scenes from behind laced fingers, but will appreciate the fast-paced action and black humour nonetheless.--Sarah Dobbs

4.5 out of 5 stars
4.5 out of 5
258 customer ratings
How does Amazon calculate star ratings?
Amazon calculates a product’s star ratings based on a machine learned model instead of a raw data average. The model takes into account factors including the age of a rating, whether the ratings are from verified purchasers, and factors that establish reviewer trustworthiness.
Top reviews

P. Vandevenne -. Datarescue
5.0 out of 5 stars Couldn't stop laughing.
Reviewed in the United Kingdom on 26 December 2013
Verified Purchase
If you have ever worked in some kind of corporate environment, where team building and similar fancy modern management techniques are used and abused, this is a must-see. I could actually put the faces of real people I've met in such circumstances on the movie's characters and couldn't help laughing. And yes, I think some of them would have deserved the same fate.

I did buy a few copies, which I offered to some of the most blatant stereotypes I had met. Never had any feedback. Which leads me to this existential question: if you are such a stereotype and watch yourself, do you even realize it?

Amazon Customer
5.0 out of 5 stars An absolutely great funny horror movie
Reviewed in the United Kingdom on 12 April 2017
Verified Purchase
An absolutely great funny horror movie, the "steak pie" with the human teeth in it was a hoot! plenty of blood and guts for all to enjoy, scrumptious.
Read more
2 people found this helpful
Helpful
Comment Report abuse

S. A. Luff
5.0 out of 5 stars Different slasher
Reviewed in the United Kingdom on 27 July 2015
Verified Purchase
Big fan of Danny Dyer and seen this film before but had to add to my DVD collection. OK it has the normal slasher formula as something happens to them one by one by it has a twist from a terrible war not used in a film until now. the extras are really interesting as it shows Danny doing much of his own stunts and really paying for doing so.
Read more
One person found this helpful
Helpful
Comment Report abuse

Brother Woodstock
5.0 out of 5 stars horrible bosses must die
Reviewed in the United Kingdom on 5 October 2017
Verified Purchase
"There's no I in team and i cant spell success without U. " HAHAHAHHA Then he dies horribly. There are some other gems but you should find out for yourself. GET IT! The additional footage is great as well. How to make a film. More like how to make a bloody funny, scary, well acted film.
Read more
Helpful
Comment Report abuse

Crom is my god
5.0 out of 5 stars A cracker
Reviewed in the United Kingdom on 4 September 2018
Verified Purchase
Great entertaining film funny and tensecat once. Classic ending.
Read more
One person found this helpful
Helpful
Comment Report abuse

Mummy & Daddy
5.0 out of 5 stars Great cheesey, cheeky English black comedy with blood and gore galore!!
Reviewed in the United Kingdom on 5 July 2020
Verified Purchase
Typical Danny Dyer, cheeky London lad movie with lots of blood and guts and cheeky comedy. Not going to be to everyone's taste, but right up our street for a bit of light hearted horror!
Read more
Helpful
Comment Report abuse

william germon
2.0 out of 5 stars Characters unsympathetic
Reviewed in Canada on 14 October 2018
Verified Purchase
Good but not what I expected. Not enough comic atmasphere as the trailer. But good nonetheless
Read more
Helpful
Sending feedback...
Thank you for your feedback.
Sorry, we failed to record your vote. Please try again
Report abuse

Danno88
5.0 out of 5 stars Mein Geschmack getroffen
Reviewed in Germany on 14 May 2013
Verified Purchase
Hallo,