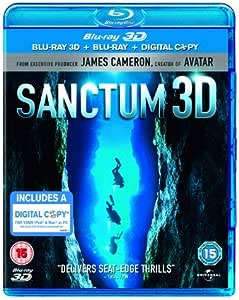 Region information: The Blu-ray discs in this item are region free.

, the epic underwater adventure from three-time Academy Award®-winning executive producer James Cameron (Avatar, Titanic), follows a team of underwater cave divers on a treacherous expedition to the largest, most beautiful and least accessible cave system on Earth. When a tropical storm forces them deep into the caverns, they must fight raging water, deadly terrain and creeping panic as they search for an unknown escape route to the sea.

With dwindling supplies, the crew—including Carl’s girlfriend, Victoria (Alice Parkinson of Where the Wild Things Are, X-Men Origins: Wolverine), and Crazy George (Dan Wyllie of Muriel’s Wedding, Chopper)—must navigate an underwater labyrinth to make it out. Soon, they are confronted with the unavoidable question: Can they survive, or will they be trapped forever?

If there's an undersea adventure with high-tech equipment, macho posturing, and lots of underwater photography, you know James Cameron must be swimming around the vicinity. Add the fact that Sanctum was released to theaters in 3-D, and it's clinched. Cameron served as executive producer to this crazy tale of a cave-diving expedition forced to improvise when a typhoon inundates their New Guinea location. (The film, shot in Australia, is allegedly based on a true event by co-screenwriter Andrew Wight, but it might be safe to conclude that the original incident was a jumping-off point for the high melodrama on display here.) A globetrotting billionaire (Ioan Gruffudd, of Fantastic Four) is underwriting this exploration of a hidden cave maze, which explains why he gets to bring his girlfriend (Alice Parkinson) along. As a measure of their thrill-seeking habits, we are told they met on an Everest climb. The cave-diving boss is a crusty old pro (Richard Roxburgh), who is rough on his underlings and even rougher on his teenage son (Rhys Wakefield); naturally, the cataclysm that follows will be an occasion for some extreme father-son fence mending. As cornball as these elements are, and as generally toneless as director Alister Grierson's ear is with the dialogue scenes, Sanctum does work up some bona fide thrills: the sheer power of water is unleashed at a few memorable spots, as is the panic of losing an oxygen tank at a crucial moment. It's also pretty brutal, with a steep body count and a few grotesque bits of bodily injury. It ought to be easy to dismiss Sanctum as a silly piece of boy's adventure, but--curse you, Cameron!--one must admit that the thing is awfully effective. --Robert Horton

4.1 out of 5 stars
4.1 out of 5
442 customer ratings
How does Amazon calculate star ratings?
Amazon calculates a product’s star ratings based on a machine learned model instead of a raw data average. The model takes into account factors including the age of a rating, whether the ratings are from verified purchasers, and factors that establish reviewer trustworthiness.
Top reviews

Raymond S. Pritchard
4.0 out of 5 stars 3D film
Reviewed in the United Kingdom on 14 May 2019
Verified Purchase
Having recently acquired the facility to view 3D on my television, I tried it out with this movie. The quality of the movie did not, unfortunately, match the quality of the 3D (no fault of the seller). However, the seller's price for the film and the speed of delivery was excellent, no complaints from me on that score!
Read more
Helpful
Comment Report abuse

Filmbug
4.0 out of 5 stars Good 'cave' movie!.
Reviewed in the United Kingdom on 3 June 2015
Verified Purchase
A nerve wrecking movie for people who are always optimistic. Because going deep into such a cave under water is looking for death indeed!!. The movie is based on true story, but I think this kind of exploration hobby is really suicidal!. But, having said that, I really enjoyed it. It has a good story and it manages the tension till the end. Excellent cast, but the 'son' of the leader can show more of his 'dislike' or 'hate' against his father. But, his acting is good enough to show the tension between him and his father.
Read more
Helpful
Comment Report abuse

Ceedee
4.0 out of 5 stars I liked it.
Reviewed in the United Kingdom on 17 August 2016
Verified Purchase
This film seems to take a panning from most critics but I thought it was good and for once even my wife agreed.
The 3D is, I think, excellent on this DVD, considerably better than many others.
Read more
One person found this helpful
Helpful
Comment Report abuse

doreen clark
4.0 out of 5 stars Good popcorn movie
Reviewed in the United Kingdom on 9 July 2014
Verified Purchase
First viewed this on DVD a bit lame on the colour calibration and the sound was way below one would expect . But in 3D and on Blu-ray everything has changed the picture contrast and colour saturation is superb and sound right out of studio. The scrip is a little dodgy in parts and the acting is sometimes a bit gringe worthy but thats it's all a good bit of fun hard to believe this is based on true facts.
Read more
One person found this helpful
Helpful
Comment Report abuse

Christine
5.0 out of 5 stars Brilliant 3D movie experience!
Reviewed in the United Kingdom on 11 April 2018
Verified Purchase
Not only a good storyline, the 3D effects were awesome throughout the movie.
Now it is in with my top favourites list of how a 3D movie should be made.

Nothing at all to dislike.
Read more
Helpful
Comment Report abuse

gary.
5.0 out of 5 stars great film.
Reviewed in the United Kingdom on 5 July 2018
Verified Purchase
great film as you on the edge of your seat. really good well worth watcthing.
Read more
Helpful
Comment Report abuse

Ted Maul
4.0 out of 5 stars Surprisingly good in 3D
Reviewed in the United Kingdom on 13 March 2014
Verified Purchase
I bought this as I've got the 3D bug at present. This isn't a bad film at all. I bought it at the same time as Gravity 3D and I would say Sanctum beats the visually spectacular but plodding Gravity hands down for a gripping plot and isn't far behind on the 3D experience. Moral: Don't get sucked in by the Oscars hype surrounding a film!
Read more
One person found this helpful
Helpful
Comment Report abuse