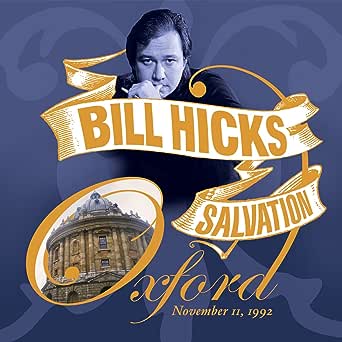 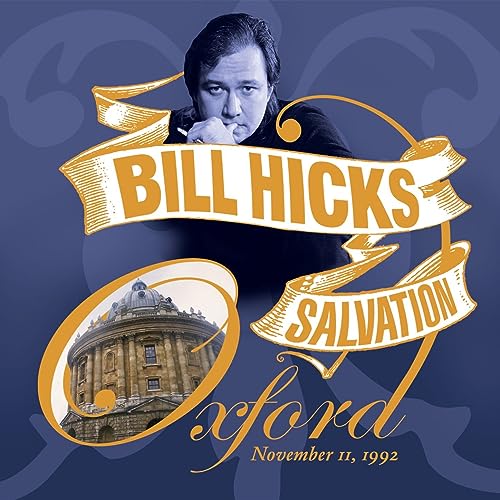 Listen Now
Buy MP3 Album £7.99
Your Amazon Music account is currently associated with a different marketplace. To enjoy Prime Music, go to Your Music Library and transfer your account to Amazon.co.uk (UK).

4.7 out of 5 stars
4.7 out of 5
15 global customer ratings
How does Amazon calculate star ratings?
Amazon calculates a product’s star ratings based on a machine learned model instead of a raw data average. The model takes into account factors including the age of a rating, whether the ratings are from verified purchasers, and factors that establish reviewer trustworthiness.
Top Reviews

Adrian Chan-Wyles Ph.D
5.0 out of 5 stars Salvation: By Bill Hicks.
Reviewed in the United Kingdom on 1 March 2012
Verified Purchase
Bill Hicks (1961-1994) had a style of interaction and delivery that made him more than a comedian, and raised his profound insights of life to the level of philosophy. He doesn't just entertain, he shares his being with you. This performance was recorded on the 11th of November, 1992, at the Oxford Playhouse, England. Just fifteen months later he died from pancreatic cancer. This particular night, however, he was at the top of his game, and performing like a world class comic genius.

This 2 CD set was released in 2003 and carries the full title of 'Bill Hicks Salvation - Oxford November 11, 1992.' An edited version of this performance is also available entitled 'Shock and Awe - Live At The Oxford Playhouse 11.11.92.' The inner-sleeve of the CD cover contains eight very positive press reports about Hicks' performances from University Student nespapers, The Irish and Birmingham posts, and The List (Scotland). Following these is a quote from Bill Hicks himself; 'We could still evolve - even in the elventh hour. If I can stop smoking, anything is possible.'

The combined running time for both these discs is just under two hours in length. This a pure Bill Hicks performance with an audience who actually understands where he is coming from, and encouraging him at every turn. There is a photograph of Bills Hicks on the inner sleeve stood outside of Oxford University. Behind the second disc is the following explanation of the title of this album:

'Oxford University's Motto is Dominus Illuminatio Mae Latin for "The Lord is my Light" from the beginning of Psalm 27, which continues with "and my Salvation." Since this recording was made at Oxford and since Bill tried so hard to help liberate people from ignorance and illusion, the chosen title is Salvation.'

Much of the wisdom he conveys is as valid today as it was then - and Hicks always offers the best of criticism for the political and military behaviour of the country that he emerged from - the USA. Priceless...

Magic Lemur
5.0 out of 5 stars The Raw Material for 'Rant in E Minor' (and 'Shock & Awe')
Reviewed in the United Kingdom on 16 April 2010
Verified Purchase
It's funny with Bill Hicks how you go through phases of loving him & loathing him. At the moment, I'm just starting a love phase and this CD (which I thought was crude, puerile rubbish) has been overturned in my estimation.
Yes, there is a lot of Goat-Boy routines and his rather disturbing 'Satan's c.ck' routines, but these are mostly on the second CD & you can forgive the man (as he'd just given up cigarettes and hadn't been laid in 3 years).

The contents of the CD are very interesting as it is a full run-through of his entire act.  Flying Saucer Tour Vol. 1  is the only thing comparable, but this is better as:
a) The audience is more lively and engaged.
b) The material is more advanced and wittier.

It includes the usual themes of drugs, pron, the LA riots, politics and Christianity, but has several interesting snippets that aren't available on the compilations he did later. For example, Bush being voted out is covered in great depth, along with material about the Gulf War (e.g. Saddam Hussein to the Arms Dealer who sold him Scuds: "I don't think you understood me when I said 'I need a weapon I can *aim*!'")

And the best thing is there is lots of material where he takes the rip out of England (which I always think is his best stuff). He takes on Snooker (on all 4 channels as it seemed in the 90's), our 'crime' ("Yesterday some Hooligans knocked over a Dustbin in Shaftesbury!") and the fact that we have Chips with everything ("I saw a Hooker offering "Head & Chips" in London; You haven't had good head unless you have a Piping-hot plate of fries with it!")

That being said, there are bits to avoid and Hicks seems to run out of steam in CD2. You also may get fed up with all the stuff you've heard before (e.g. Christians & Crosses), although thank God he spins the material slightly differently each time.

All in all, this CD is worth having and far from being a waste of time. It is one of only two CD's where the content hasn't been edited, abridged or played with and so offers the nearest approximation to a Bill Hicks gig outside of the DVD  Totally Bill Hicks .

Incidentally, am I alone in hoping that Mr Hicks struck a 'cord' with some people at the concert?
Even now, I'm hoping that Bill's insistence that women should "f[] artists" bore fruit at this particular show & that maybe there is now a 17 year old novice-comedian playing Jongleurs in Oxford (who was born of a single mother and wears a curious goatee beard). Maybe Children aren't so bad after all...

P.S. Just to make it clear - this isn't the actual material for  Rant in E-Minor  (which was taken from several performances), but it is essentially the same routines you'd find on there.
Read more
One person found this helpful
Helpful
Comment Report abuse

Rhonda Poynter
5.0 out of 5 stars Bill Hicks Becomes More Relevant As Time Passes
Reviewed in the United States on 23 October 2010
Verified Purchase
I discovered Bill Hicks after he had died - yes, my loss. I made up for lost time, however, and I am constantly at war with myself as to who deserves the #1 space on my list of Visionaries Disguised As Comedians: Lenny Bruce, George Carlin, Richard Pryor or this man. "Salvation" was recorded in England in 1992 (it wasn't released until 2005), and what amazes me about Bill is what just about everybody else notes: This work is almost twenty years old, and you could easily mistake it for having been recorded a week, a month ago. The material included is among some of my favorites from Bill - my personal views on Dallas and The Warren Commission mirror Bill's, I don't give a damn if it was fifty years ago, I'm still going to have an opinion -, and he also tears through "Puppet People", "Religion", "Smoking" and so many more. I am always surprised when somebody will review Hicks and say that a specific CD didn't have them laughing outloud all the time, and I just want to add my two cents on this subject...many people listen to Lenny Bruce to this day and will honestly admit to not laughing constantly and uproariously at everything the man said, but hanging onto every word nonetheless. Richard Pryor is another from this same cloth - and that's why these three men are so important. If they were going for constant, canned laughter, they'd have been forgotten a long time ago (really, how many of us still think that Robin Williams can do no wrong?), but that isn't what comedy such as Hicks' is about. He wants you to be entertained, he wants you to feel on an equal level, and he wants you to really get what he's talking about. I think that had he lived longer (When I went to Amoeba in Berkeley and told the clerk I'd just been turned onto Bill Hicks, and the clerk could barely get the words out, "You know, he died last month, don't you?", I knew that I was onto something special), Bill might have been the one to finally wrestle Lenny from that top space I've held him at for most of my life. He still might, as a matter of fact. Listen to this man, and have your eyes opened: "...I don't write jokes as such. For me a comic is like Lenny Bruce, who discussed humorously things that he felt strongly about. I don't feel it's necessary to be funny every second." - BILL HICKS
Read more
One person found this helpful
Helpful
Sending feedback...
Thank you for your feedback.
Sorry, we failed to record your vote. Please try again
Report abuse

ninjasuperstar
5.0 out of 5 stars The British get Bill
Reviewed in the United States on 30 October 2008
Verified Purchase
You certainly get your money's worth with this double-disc performance. Some of the material is available on Bill's other CDs, but the excellent audience makes the material come alive in a way I've never heard before. They get the jokes that pass by idiot American audiences, and their laughter is genuine. It makes you think that there are people out there who understand the world like Bill does, that he's not alone, and neither are you.
Read more
One person found this helpful
Helpful
Sending feedback...
Thank you for your feedback.
Sorry, we failed to record your vote. Please try again
Report abuse

Robert S Whinnem
3.0 out of 5 stars Good but uneven performance
Reviewed in the United States on 5 April 2015
Verified Purchase
Salvation would be a great comedy cd if the last 10 or 15 minutes were cut out. It is clear that Hicks did not have enough material to continue and should have called it a night much earlier. The great bits show up in earlier cd's that he produced when he was alive.
Read more
Helpful
Sending feedback...
Thank you for your feedback.
Sorry, we failed to record your vote. Please try again
Report abuse