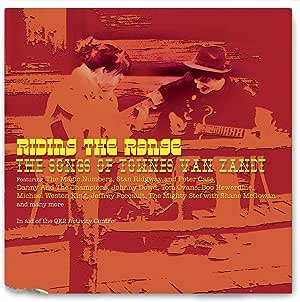 Riding the Range: The Songs Of Townes Van Zandt

With exclusive tracks by The Magic Numbers, Stan Ridgway And Peter Case, Danny And The Champions Of The World, Jeffrey Coucault, Boo Hewerdine and many more

4.2 out of 5 stars
4.2 out of 5
3 customer ratings
How does Amazon calculate star ratings?
Amazon calculates a product’s star ratings based on a machine learned model instead of a raw data average. The model takes into account factors including the age of a rating, whether the ratings are from verified purchasers, and factors that establish reviewer trustworthiness.
Top Reviews

PRIEST
5.0 out of 5 stars Townes Van Zandt
Reviewed in the United Kingdom on 3 July 2013
Verified Purchase
To be honest I only purchased this compilation of Townes Van Zandts songs for Shane MacGowan's inimitable cover of Waiting Round to Die. I'd therefore reccommend it to anyone. However first I'd say buy the original and real deal. Highway Kind, or any other recordings by the Texas Troubador. This is what country music should be. Poetry and many shot glasses full of emotion
Read more
One person found this helpful
Helpful
Comment Report abuse

chipper
3.0 out of 5 stars not bad
Reviewed in the United Kingdom on 15 April 2011
Verified Purchase
Tribute albums can be hit and miss and this effort is the same.There are, however, some excellent covers from the likes of Michael Weston King and Devon Sproule. The CD lags a bit in the middle but picks up again towards the end.Standout track, however, is 'for the sake of the song' by Danny Wilson which is one of the best Townes covers you are ever likely to hear. What a voice!
Read more
2 people found this helpful
Helpful
Comment Report abuse

Barrie Bullock
5.0 out of 5 stars Excellent album
Reviewed in the United Kingdom on 29 July 2018
Verified Purchase
Excellent album, I hadn't heard of some of the artists but enjoyed every track.
Read more
Helpful
Comment Report abuse
See all reviews from the United Kingdom
Pages with related products. See and discover other items: townes van zandt
Unlimited One-Day Delivery and more
Prime members enjoy fast & free shipping, unlimited streaming of movies and TV shows with Prime Video and many more exclusive benefits.
> Get Started