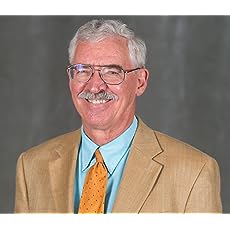 Follow to get new release updates, special offers (including promotional offers), and improved recommendations.
Richard M. Waugaman, M.D. is Clinical Professor of Psychiatry at Georgetown University School of Medicine. He is also Adjunct Professor of Psychiatry at the Uniformed Services University of the Health Sciences; and Training and Supervising Analyst, Emeritus at the Washington Psychoanalytic Institute. He received his A.B. from Princeton, where his senior thesis on Nietzsche's influence on Freud was supervised by the Nietzsche scholar Walter Kaufmann, and led to his first article, in 1973. He received his M.D. from Duke. He then did his psychiatric residency at Sheppard-Pratt Hospital in Baltimore, Maryland, and his psychoanalytic training at the Washington Psychoanalytic Institute. 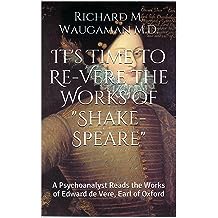 It's Time to Re-Vere the Works of "Shake-Speare": A Psychoanalyst Reads the Works of Edward de Vere, Earl of Oxford 27-Nov-2014
by Richard M. Waugaman M.D.
( 14 )
£1.50
Since 2002, Richard M. Waugaman, a psychiatrist and a psychoanalyst, has intensively pursued Shakespeare research. Sigmund Freud was the first well-known intellectual to endorse the 1920 theory that "Shake-Speare" was the pen name of Edward de Vere, Earl of Oxford. Since Waugaman was disappointed to learn that new evidence strongly supporting Freud's authorship opinion was being widely ignored, he has chosen to specialize in that aspect of Shakespeare studies. His 90 publications on Shakespeare have appeared in a wide variety of psychoanalytic and English literature journals. In this book, he has collected a sample of his publications, adding a few previously unpublished chapters. Dr. Waugaman has been a clinical psychoanalyst for over 40 years. His clinical work has convinced him that both individual and group blind spots can be massive. In the case of the Shakespeare authorship question, he is convinced that mainstream Shakespeare scholars are victims of groupthink--they have been excessively certain of their authorship theory, and have thus been engaged unconsciously in circular thinking, rather than evaluating the evidence objectively.
Read more 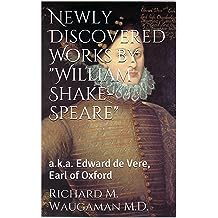 Newly Discovered Works by "William Shake-Speare": a.k.a. Edward de Vere, Earl of Oxford 08-Nov-2014
by Richard M. Waugaman M.D.
( 18 )
£1.49 £6.22
As more people accept the likelihood that the Earl of Oxford published his plays and poems under the name of "William Shake-Speare," we have the wonderful opportunity of studying the early works written by de Vere, either anonymously, or under other pseudonyms. This book explains why the most important Elizabethan guide to rhetoric--the art of writing well-- was probably written by Edward de Vere. It also presents evidence attributing several anonymous Elizabethan poems to Oxford. This second edition includes two new chapters. The first presents extensive evidence that the young Oxford was the true translator of Ovid's Metamorphoses. This is a translation that is widely acknowledged as one of the top four literary sources for Shake-speare. The other new chapter shows the young Oxford's intense interest in rhetoric--also the art of persuasion--by presenting evidence that he was the real translator into English of another Latin work: Johann Sturmius's treatise on rhetoric. In both these chapters, I examine Oxford's use of what he once called "the figure of twins"--hendiadys, a particular sort of word pair that is used more often by Shakespeare than by any other Elizabethan authors (think "slings and arrows," "sound and fury," etc.).

Richard M. Waugaman, M.D. is Clinical Professor of Psychiatry and 2012-2016 Faculty Expert on Shakespeare for Media Contacts at Georgetown University. He is also Adjunct Professor of Psychiatry at the Uniformed Services University of the Health Sciences; and Training and Supervising Analyst, Emeritus at the Washington Psychoanalytic Institute. He received his A.B. from Princeton, where his senior thesis on Nietzsche and Freud was supervised by Walter Kaufmann. He received his M.D. from Duke. His 170 publications include 70 articles, book chapters, and book reviews on Shakespeare and the psychology of pseudonymous authorship. Most of his Shakespeare publications are available at his websites— http://www.oxfreudian.com; and http://explore.georgetown.edu/people/waugamar/
Read more
Other Formats: Paperback