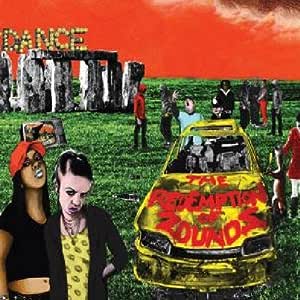 Add to Basket
£25.03
Eligible for FREE UK Delivery Details
Sold by: Amazon
Have one to sell? Sell on Amazon
Available to Download Now
Buy the MP3 album for £7.49

The Redemption of Zounds [VINYL]

Zounds Format: Vinyl
4.5 out of 5 stars 10 ratings
See all 4 formats and editions Hide other formats and editions
Only 2 left in stock.
Dispatched and sold by roundMediaUK in certified Frustration-Free Packaging.
Buy the MP3 album for £7.49 at the Amazon Digital Music Store.

Vinyl LP pressing. 2011 album from the British Anarcho-Punk band. A notorious recluse, songwriter and lead singer Steve Lake has reunited Zounds only intermittently since the band's early '80s heyday, despite receiving numerous requests to record and tour. The ten songs he has written for the Redemption of Zounds retain all the hallmarks of the classic template: incisive lyrics, sharp guitars, satirical overtones, emotional terror and great, memorable tunes. It sounds totally at home in a modern world that Lake claims 'is as bewildering, absurd, tragic and joyful as it ever was."

Christopher James Cutler
5.0 out of 5 stars Zounds Reddem themselves
23 March 2019
Verified Purchase
This is the long awaited follow up to Curse of Zounds from 1981 ( so it took them 30 years) It follows many break ups and reforming and many line up changes . Sylistically the music is still the minimalistic toned down punk with a few modern updated touches applied to the songs to keep them relevent but the spiky enthusiastic delivery is still present. Maybe that stunning debut from 1981 was indeed a Curse because it was a hard act to follow.. So has the wait been worth it? Have they redeemed themselves Well Yes and No ! The Art work is good the songs are good and the passion and intensity is still there But the disappointing aspect is the length of the CD ( 10 songs in 30 minutes) l appreciate that punk songs are always short and to the point and don't outstay Thier welcome but a few more tracks and more time would of been appreciated But that said it is still an exciting enjoyable experience listening to 2011 version of the zounds I recommend you buy this CD play it loud and allow yourself to enjoy hearing classic music from a classic underrated and under achieving band who could of and should of been more successful and had a greater musical legacy and recording output
Read more
Helpful
Comment Report abuse

Jeremy vile
5.0 out of 5 stars GOOD ALBUM IN A THROW AWAY AGE.
5 November 2013
Verified Purchase
I DONT GET THE COMMENTS ABOUT STEVE LAKE SOUNDING LIKE AN ANGST RIDDEN KID? HE HAS ALWAYS HAD THAT WAILING VOICE CRYING FOR CHANGE AND IVE ALWAYS LIKED HIS WORDS...NOT THROW AWAY LYRICS THAT PLAGUE OUR WAVES THESE DAYS. SOMEONE SAID HE SOUNDS LIKE A KID MOANING OR WHINING WHY IS THE WORLD SO BAD?WELL HEY...ITS A RELEVANT QUESTION TO A LOT OF FOLKS AND IM SURE THERE WILL BE KIDS WHO LIKE ME AT A YOUNG AGE JUST LIKED THE FACT SOMEONE WAS ASKING THESE QUESTIONS AND LOOKIN BEYOND THE VEIL AND WILL LIKE THE FACT HES SINGIN ABOUT THEM. ITS NOT ANYWHERE NEAR AS GOOD AS CURSE OF ZOUNDS BUT STILL A GOOD ALBUM,BUT THEN AS I ALWAYS SAY...ITS JUST MY OPINION. SEE WHAT YOU THINK.
Read more
2 people found this helpful
Helpful
Comment Report abuse

Mise Eire
5.0 out of 5 stars Pure Quality
18 June 2012
Verified Purchase
This CD is absolutely great. It has many wonderful catchy, punky songs and its a CD that you will listen to over and over again. Raw melodic punk..its great.
Read more
One person found this helpful
Helpful
Comment Report abuse

Mr. I. W. L. Murdoch
4.0 out of 5 stars Not worthy of 'classic album' status
30 August 2013
Verified Purchase
Zounds are one of those bands whose very denial of any 'punk rock' credentials has made them somehow more 'punk' than many 3 minute shouty bands. I've liked them since the release of 'War/Subvert/Can't Cheat Karma' thirty odd years ago. They (Steve Lake, that is) always came across as writers of well-crafted, catchy tunes with a thoughtful and original message - something different - along with The Mob - from the plethora of clone anarcho / anti-war bands. I've seen them live a good few times in recent years and been a bit disappointed. The shows have been largely a 'greatest hits' package interspersed with lengthy rambles by Steve: entertaining, but not essential.
So I'd been hoping that 'Redemption...' would offer something exciting and meaningful. I'm really not sure it does. I've rated it **** out of respect for the band, but I think that's a little generous. There are some good tracks here and some perceptive observations but frankly some of the lyrics are more worthy of an angst ridden schoolboy than a middle-aged 'man of the world' ('What makes a man today?/What makes him say the things he says?'; 'Why do people have to hurt each other/act mean and ugly and nasty to each other'). In addition, much of the delivery is slow-paced and, dare I say it 'whiny'.
I can see why people are rating this, but my point is that bands like Zounds used to make people sit up and listen. This is listenable and entertaining enough but that's it. I don't know, maybe that makes it even MORE 'punk'. Me, I'd rather listen to TV Smith, an artist who still has something important to say and who says it with vibrancy and energy.

anarchobaldy
4.0 out of 5 stars astounding zounds amazing music
12 September 2011
Verified Purchase
among the filth of generic proto pop and regurged pap at last a breath of fresh air albeit a while since the last outing, reflections on youth and songs of conscience, thanks.
Read more
One person found this helpful
Helpful
Comment Report abuse
See all 10 customer reviews
Write a customer review

Go to Amazon.com to see all 1 reviews 5.0 out of 5 stars
Unlimited One-Day Delivery and more
Prime members enjoy fast & free shipping, unlimited streaming of movies and TV shows with Prime Video and many more exclusive benefits.
> Get Started