<![endif]--> Skip to main content
The Prague Ultimatum: A gripping international thriller and over 8 million other books are available for Amazon Kindle . Learn more
Share <Embed> 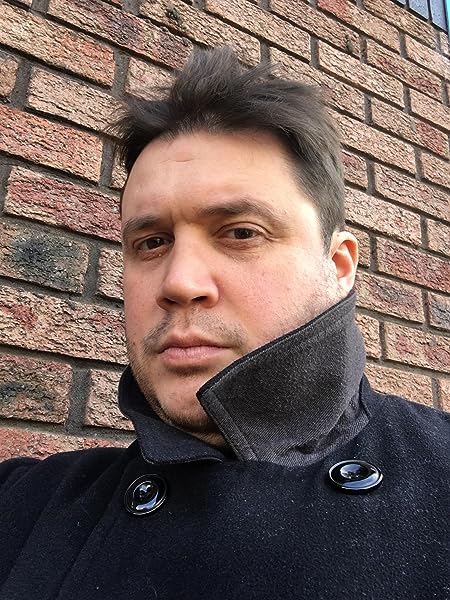 Start reading The Prague Ultimatum on your Kindle in under a minute.

"A terrific read that is very hard to put down." --Hugh Fraser, bestselling author, Harm, Threat and Malice

James is an HR professional and former Mod DJ for internet radio, with a neglected talent for the harmonica. He first began writing during his University days, re-discovering his passion for storytelling after delving into the rich history of Eastern Europe. First and foremost he is a proud Dad of two wonderful kids and is likely an infuriating husband. When not writing, James is happiest not acting his age with his children.

4.3 out of 5 stars
4.3 out of 5
27 customer ratings
How does Amazon calculate star ratings?
Amazon calculates a product’s star ratings based on a machine learned model instead of a raw data average. The model takes into account factors including the age of a rating, whether the ratings are from verified purchasers, and factors that establish reviewer trustworthiness.
Top Reviews

Hugh Fraser
5.0 out of 5 stars A gripping and enthralling political thriller which is very difficult to put down.
Reviewed in the United Kingdom on 23 April 2017
Verified Purchase
James Silvester captures the post-Brexit zeitgeist brilliantly in this compelling page-turner. Captain Lincoln Stone, whose distinguished military career stretches from the Falklands War to a recent engagement in Syria, is sent on a covert mission to Prague to investigate the activities of Myska, a right-wing politician with odious views on racial issues, and to discredit him if possible. In Prague he meets the beautiful but enigmatic Professor Natalie Abelard who is similarly committed to unmasking Myska’s true mission. As their enquiries reveal the extent of political subterfuge and various sinister conspiracies within the intelligence agencies of the Europe, tension begins to mount between the Czech Prime Minister and the mysterious Institute for European Harmony. With the powerful presence of Russia lurking in the background, and the unwelcome intrusion of the USA,
international relations become increasingly tense, and as the narrative races towards its nail-biting climax, Captain Lincoln Stone is caught in a vortex of deception and betrayal which strains his considerable survival skills to the limit. The Prague Ultimatum provides a salutary and timely reminder of the insidious threat that we all face from the creeping advance of far-right ideology and separatism, while being a gripping and enthralling political thriller which is very difficult to put down.

Tim Heath
5.0 out of 5 stars Another well crafted story
Reviewed in the United Kingdom on 25 October 2017
Verified Purchase
A book that I read in two parts. I started it the first day he eBook preorder came through. That had some formatting issues and having reached out to the author, he was kind enough to send a paperback all the way to Estonia for me. Even signed it too!

This is the second book I've read from this author, both set in the same reunified nation that is current Czech Republic. As a writer of Russian based thrillers myself, there was plenty in this one to keep me entertained. Plenty of twists, and an unexpected resolution. I rated it five stars because of the quality design of the paperback, the craft of the story telling and the fact James Silvester is an author I'm following and think you should too.

My one critical comment (and my rating is unaffected as this issue can be corrected) was the badly formatted eBook which stopped me reading initially, and the large number of errors that still seemed to make it through the edits. I'll reach out to he author to mention these. They might well have been corrected already. This in no way should stop you enjoying this well thought out story, even if at times it's a little extreme.

After all, we all need a little escapism and this post Brexit instalment hits the mark.

Amazon Customer
5.0 out of 5 stars A breath taking, political thriller, full of twists and swerves...
Reviewed in the United Kingdom on 24 June 2017
Verified Purchase
I read Escape to Perdition, the first book in Silvester's Prague thrillers, and absolutely loved it, my review is on my own book page and also on Amazon. I bought this sequel as soon as I heard it was out, and was not disappointed.
The story moves on in a Czechoslovakia reunited under a strong woman Prime Minister and an elderly heroic President, but the uneasy peace is threatened by Islamic terrorism, the rise of a charismatic fascist leader, and the knocking on the door of the Russians, following their trip into the Ukraine - and what of the Institute, a shady organisation manipulating EU politics, and to what end - are they the white knights?
Silvester builds this story in a masterly way, and the reader is drawn into various dark alleys, the hero, or is he an antihero, dumped into a maelstrom of chilling political manoeuvring, a traditional soldier having to adjust into the veiled and turgid world of MI6.
As a reader we are sent down paths, each equally believable and we get right behind it, but nothing is as it seems, and neither is the motivation of the political directors - this is, after all, politics - well, actually it is the lives of millions of innocent people, not just in Czechoslovakia, but across Europe, and the swerves and curves of intrigue I found gripping, and the end, barnstorming, a complete surprise.
I cannot reveal more of the plot as I would not want to spoil the roller coaster ride, but this is truly a masterly work, well thought out - a wonderful read.
5 Stars and a recommended read
Read more
One person found this helpful
Helpful
Comment Report abuse

business reader
5.0 out of 5 stars Intelligent and fun. Great read.
Reviewed in the United Kingdom on 17 April 2017
Verified Purchase
I started this book with a sense of apprehension as I enjoyed the author's first book so much I thought I might be disappointed by his second one. I shouldn't have worried. Great characters and sense of place as well as an ability to weave in actuality without it feeling forced. Hoping that many fellow readers discover James silvester as a writer who can pull off a thriller that is both intelligent an de fun to read. Highly recommended.
Read more
2 people found this helpful
Helpful
Comment Report abuse

Alison Waterfield
5.0 out of 5 stars A highly recommended book
Reviewed in the United Kingdom on 15 May 2017
Verified Purchase
This is an exceptional read. Predominantly a political thriller, a subject that often loses my enthusiasm, The Prague Ultimatum ensures it keeps your attention with a cleverly written storyline. Lots of action and a totally unexpected ending. Another excellent book from James Silvester.
Read more
One person found this helpful
Helpful
Comment Report abuse

cwlman
3.0 out of 5 stars Excellent, but...
Reviewed in the United Kingdom on 14 January 2018
Verified Purchase
A well-crafted and developed tale with some genuinely interesting characterisation of the main protagonists.
But spoilt for me by far too many simple and careless spelling and punctuation errors. What happened to proof reading?
Read more
2 people found this helpful
Helpful
Comment Report abuse

Amazon Customer
3.0 out of 5 stars Quite intense history themed novel.
Reviewed in the United Kingdom on 19 February 2019
Verified Purchase
Good read, well written, didn’t have me engrossed but kept me reading, a bit improbable at times with the rising body count,
but then lm a stickler for authenticity and factuality, otherwise quite good.
Read more
Helpful
Comment Report abuse
See all reviews from the United Kingdom

Amazon Customer
3.0 out of 5 stars Three Stars
Reviewed in the United States on 21 October 2017
Verified Purchase
Not Lecarre or First but good
Read more
Helpful
Sending feedback...
Thank you for your feedback.
Sorry, we failed to record your vote. Please try again
Report abuse

Mikeharrowell
5.0 out of 5 stars Another winning page turner!!!
Reviewed in the United States on 17 May 2017
Verified Purchase
Well written, on point with today's political climate in Europe, & enough suspense to have me reading on the edge of my seat.
The plot line is so entwined in potential truths, it makes me nervous, but Stone's journey is one that will carry you to the very last page.

Awesome read, can't wait for the next one!
Read more
Helpful
Sending feedback...
Thank you for your feedback.
Sorry, we failed to record your vote. Please try again
Report abuse