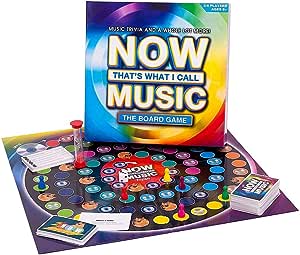 Technical Details
WEEE Directive
Additional Information
Feedback
Would you like to tell us about a lower price?
If you are a seller for this product, would you like to suggest updates through seller support?

Do you love music?

Now That’s What I Call Music is one of the most successful compilation album series of all time and music fans can now put test their musical knowledge with this fun-packed trivia board game.

There are questions from the 80’s, 90’s and 21st Century as well as covers to sing and song titles to be mimed, promising hours of fun and entertainment for the whole family. The aim of the game is to answer the questions and pip your opponents to the centre of the board.

How will you win the game!

Throw a one and you’ll be answering a question on 80’s music, a two and it will be music trivia from the 90’s and a three will have you wracking your brains on tunes from the 21st century. Throw a four and it is Complete the Title round but a five will see you miming a song title such as Parklife, Rolling in the Deep and Pump Up the Jam, for your fellow players to name. A six on the dice though will have you describing, humming, clapping or even whistling songs such as Imagine, Mad World and the Birdy Song for opponents to guess!

Page 1 of 1 Start overPage 1 of 1
This shopping feature will continue to load items when the Enter key is pressed. In order to navigate out of this carousel please use your heading shortcut key to navigate to the next or previous heading.
Back
Next
Customer Questions & Answers
See questions and answers

4.4 out of 5 stars
4.4 out of 5
194 customer ratings
How does Amazon calculate star ratings?
Amazon calculates a product’s star ratings based on a machine learned model instead of a raw data average. The model takes into account factors including the age of a rating, whether the ratings are from verified purchasers, and factors that establish reviewer trustworthiness.

Mandrake
2.0 out of 5 stars Very difficult questions. Not suitable for casual music fans
Reviewed in the United Kingdom on 9 January 2019
Verified Purchase
I bought this for Christmas for my 14 year old son who has developed a love of 80's music: Human League, Police, Smiths, Cure, Depeche Mode, Duran Duran, etc etc. However, the questions mainly reference obscure bands/hits/culture from the 80's, 90's and 00's, which neither he nor his parents & relatives had any chance of answering. Some of the questions on adverts from the period you will have no way of knowing unless you actually lived through it. We tried to play it but gave up as none of the 4 adults or 4 children knew the answer to many of the questions or had even heard the songs referenced. For dedicated music fans with very good memories only. I attach some photos of random question cards. See how many you can get before purchasing. I will be giving our set to charity.
Read more

Bustergroove
4.0 out of 5 stars Attention! Music & music quiz lovers look this way...
Reviewed in the United Kingdom on 2 February 2018
Verified Purchase
Bought as a Christmas gift for my music mad 50-something partner to play with myself and two teenage children: aged 16 and 15. Well ok. It was for me too!

The game is obviously aimed more at those between 30-60 years old with music questions mainly from the 1980's onward, but when played in 'team' mode as opposed to individuals, my teenage sons were able to answer some of the questions with a little help from us oldies.

Probably more appropriate to play with friends or much older children, however we have played it several times and have all enjoyed the variety of ways to 'ask' the questions, including humming the song or describing the song without using any words on the card. This proved slightly troublesome for my 15 year old who hasn't shown any interest in any music pre-2000.

A typical game last between 1 - 1.5 hours depending on how knowledgeable you and/or your team are. For true music-lovers this game is a must!

Kindle Customer
4.0 out of 5 stars Good fun!
Reviewed in the United Kingdom on 27 December 2017
Verified Purchase
We played this on Boxing Day when we had all the family around. We decided to play as two teams: boys vs girls.
Lots of the spaces on the board have CD pictures on them which mean you have to have a question and these were fun but there were other spaces that were blank where you don't have to do anything and these were a bit dull especially if you and the other team kept landing on them so all it was was a game of who could roll a higher number to get round the board. Rolling a 6 meant someone on the team had to do a charade or bark out a song for the others to guess and we had a lot of laughs from this. We did enjoy the questions though the font on the question cards was a little small for our older players with poor eyesight so you may need a magnifying glass to hand!

sharonm
4.0 out of 5 stars Great fun for pop enthusiasts !
Reviewed in the United Kingdom on 5 January 2018
Verified Purchase
Played this with 4 knowledgeable adults. The game is easy to play with some categories that made us all laugh ! Some of the questions were very difficult, even though we all consider ourselves to have a broad knowledge of music from the 60s to today. I don't think many 16 -25 year old would know many of the answers though .
Read more
2 people found this helpful
Helpful
Comment Report abuse

Monte
1.0 out of 5 stars Impossible questions - terrible game play
Reviewed in the United Kingdom on 26 December 2018
Verified Purchase
For someone who is very knowledgeable on 80's and 90's music - totally impossible. My children could barely answer one question - ages 23-18. Game play just involves throwing dice. No actual music cd or dvd. Bored in about 5 minutes. Probably worst board game ever.
Read more
3 people found this helpful
Helpful
Comment Report abuse

Maggie
5.0 out of 5 stars Great fun and so much laugh with questions 5 & 6!!!
Reviewed in the United Kingdom on 19 January 2018
Verified Purchase
Fantastic. We had so much fun playing it with my in laws at Christmas! We also played with a 13 year old and it was fun too. There are bits for every generation.
Read more
3 people found this helpful
Helpful
Comment Report abuse

Prunette
4.0 out of 5 stars Good game if your music knowledge is good.
Reviewed in the United Kingdom on 4 May 2019
Verified Purchase
Found this game quite hard but got round that by answering the ones we wanted to, would be great with someone really hot on music. Have played it a couple of times and quite enjoyed it. Arrived quickly and well packaged.
Read more
Helpful
Comment Report abuse
See all reviews from the United Kingdom

Rottsrool
4.0 out of 5 stars Fun with faults
Reviewed in the United States on 9 August 2019
Verified Purchase
So having just purchased and played Now that’s music, here’s my opinion on this game.
The board and cards are good quality.
As far as game play it’s for the most part well thought out.
Questions 1-4 on the dice cover 80s-90s-2001s, questions are varied some hard some easier.
The main problem I have is with a dice roll of a 5 you have to do a charade which I’m not keen on and a roll of 6 you have to hum the tune,
which the problem with that is if you don’t know the song how can you hum it.
I’m sure some will like the charades/humming part but I don’t.
All in all it’s a fun game with issues.