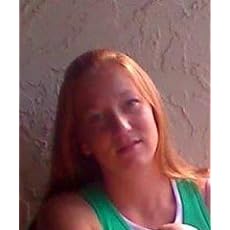 Follow to get new release updates, special offers (including promotional offers), and improved recommendations.
Hey everyone. My name is Nicole Hill. Everybody calls me Nikki. I only hear Nicole when I'm in trouble.I was born and raised in a very small town and with not much else to do, I turned to reading. I loved the escape that I found in the pages of the stories that I read. At around the age of twelve I started to write down some of my own to read to my brother and sister before bed. Around the same time, I became very interested in the tales of King Arthur and Morgan Le Fay. I loved the way magic was so alive in the legends. I always lost myself entirely in the world of Merlin but always hated the way the legends ended. I was always left wondering why they were never given a chance to redeem themselves. So Five years ago, when I was working at a call center and had loads of time between calls, I decided that I wanted to finish their story my way. So here I am. Legacy Forgotten is the first in the Avalon Legacies. My way of fixing what I considered to be a great injustice. Hope you enjoy their world as much as I have.

*****There is an old Copy of Legacy Forgotten dated in March. Don't buy that one and if you have, ask for a refund. I can't figure out who has it up and I'm not getting paid for it. Also, it was an unedited copy that I had on Smashwords a while back for people to review so I knew what to work on. So it's terrible anyway. LOL*******
Read more 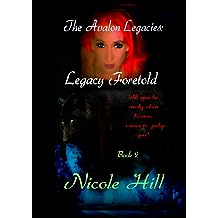 Legacy Foretold (The Avalon Legacies Book 2) 12-May-2014
by Nicole Hill
( 6 )
£1.31
It's been over twenty years since Ailis began her tedious quest to right the terrible wrongs her ancestors mistakes caused not just to earth but to Avalon as well. Just when she and Kenneth are back in Avalon and it's gates are once again open to their people, they get wind of a Legacy. It seems there is to be a final test from their goddess. It seems she will need proof that they have learned from the terrible mistakes of Merlin, King Arthur and Morgaine. If the test is failed, they will lose their home forever. Only this time, it is their children that will be tested. Ailis and Kenneth can only prepare them and then stand by, knowing they cannot interfere while their home, people's lives and the lives of one or both of their children are at stake. Will Ailis and her family finally make up for the atrocities of her ancestors or will they lose it all and be forced out of their home with no hope of ever being one with their maker again?
Karma has a very important job. A job she never wanted. Karma is the Assassin of the Goddess and is charged with hunting supernatural beings that don't follow the rules.
She also has a family legacy that consumes her every waking thought. Karma is supposed to be watching for a deceiver. Someone she will want to trust but shouldn't and is in a constant state of confusion. She does not know what the right choice is and is terrified of failing her entire species. Her parent's risked everything to save Avalon and if she makes one false move according to her legacy, she will undue all that they have accomplished.
Can Karma control her infamous temper or will she succumb to the same fate as her ancestor, Morgaine?
Read more 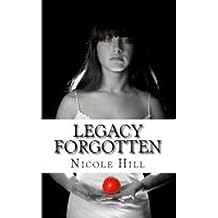 Legacy Forgotten 10-Mar-2012
by Nicole Hill
( 18 )
£2.27
Ailis has spent her entire life pretending that she did not have powers because her mother deemed them UN normal and therefore bad. Her grandmother spent the first years of Ailis’ life teaching her, preparing her for a great destiny. When her mother found out she moved them to California and away from her grandmother and teacher. So she decided to spend her life on the side of law enforcement. She is still doing great things. Her only problem now is that she is pretty sure that the serial murders her homicide unit is investigating are not being committed by a human. In walks the most gorgeous man she has ever seen. What’s wrong with that? Ailis not only knows that he is a vampire but she also knows that he is the one who’s been draining child molesters and murderers and leaving an empty carcass for her to find. Still, he does not seem like a bad guy to her. During her investigation she unearths secrets about her families past that takes her half way across the world to right a wrong that occurred hundreds of years ago. Can she trust this vampire to help her solve a mystery that could very well end up with her being life challenged herself? Dangerously attractive vampire, Kenneth has been around long enough to know that there are no such things as coincidences. That’s why, when he meets the undeniably strong willed homicide detective Ailis, he knows that there is a good explanation as to why she looks identical to his long dead fiancé. He just has to figure out what that would be. He decides to look into it and quickly discovers that she may look like his fiancé but she is independent and don’t take any crap. It doesn’t take long for her to remind him that he has a heart and what it feels like when it is breaking. When his one hundred year nemesis shows up in Miami and tries to force Ailis to join him, he realizes that her powers are worth something to even the worst of his kind. He pledges to protect her from any danger as long as he is still breathing. If those trying to keep her from fulfilling her destiny have anything to do about it, that won’t be long at all.
Read more
Other Formats: Kindle Edition 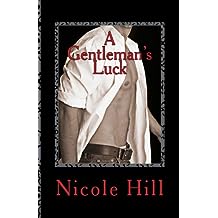 A Gentleman's Luck 05-Dec-2011
by Nicole Hill
( 10 )
£0.99
William has suffered through the Civil war and survived his entire family including his fiancé. Now, he has shipwrecked on an island in the middle of nowhere. He knew his luck was rotten but this is taking it too far. Captured and taken to serve in an army that is not his, he's decided his luck has finally dealt him a fatal blow. Until he meets Princess Na-Lisa. She is stubborn,vivacious and he can't help wanting to save her. He knows he must help her to get away from her uncle and his disgusting plans. Can he beat his rotten luck against all odds to save them both?

Na-Lisa's world has been turned upside down by the death of her father and her brother. Her uncle has taken over and has great plans for the kingdom. Plans that include her. She is determined not to go along with them even if it means her untimely demise. She must get out or risk her immortal soul. Can she trust William to save her or is he just one of her uncle's mindless minions?
Read more