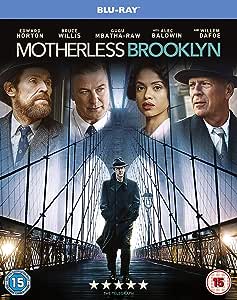 Rated: Suitable for 15 years and over Format: Blu-ray
4.2 out of 5 stars 44 ratings
Amazon's Choice recommends highly rated and well-priced products.
Amazon's Choice for "motherless brooklyn blu ray"
Promotion Message No-Rush Reward. 1 promotion
Note: This item is eligible for click and collect. Details
Pick up your parcel at a time and place that suits you. How to order to an Amazon Pickup Location? Learn more

Set against the backdrop of 1950s New York, “Motherless Brooklyn” follows Lionel Essrog (Edward Norton), a lonely private detective afflicted with Tourette's Syndrome, as he ventures to solve the murder of his mentor and only friend, Frank Minna (Bruce Willis). Armed only with a few clues and the powerful engine of his obsessive mind, Lionel unravels closely-guarded secrets that hold the fate of the whole city in the balance. In a mystery that carries him from gin-soaked jazz clubs in Harlem to the hard-edged slums of Brooklyn and, finally, into the gilded halls of New York's power brokers, Lionel contends with thugs, corruption and the most dangerous man in the city to honour his friend and save the woman who might be his own salvation.

4.2 out of 5 stars
4.2 out of 5
44 customer ratings
How does Amazon calculate star ratings?
Amazon calculates a product’s star ratings based on a machine learned model instead of a raw data average. The model takes into account factors including the age of a rating, whether the ratings are from verified purchasers, and factors that establish reviewer trustworthiness.
Top Reviews

MAD DOG
1.0 out of 5 stars MF LESS BROOKLYN😴
Reviewed in the United Kingdom on 18 April 2020
Verified Purchase
Well that's an hour I won't get back even though the film is on for an agonising 2hrs and 24mins. I was so fed up after just 60 mins of Edward bloody Norton twitching with stupid annoying obsessive compulsive disorder tourettes outbursts I aborted this dreadful film. Not something I do very often so for me to turn off a film it has to be really terrible. I have enough of Edward Norton playing roles with some sort of metal disorder. Primal Fear and The Score was enough. Well actually no, Primal Fear because it is a great film. Give it a rest Norton you are boring.

As for the rest of Motherless Brooklyn, it's nothing more than a vanity project directed, produced and written by Norton. The cast and crew who just suck up to Norton in the special features say it's a passion project. Ha, what a load of codswallop. It's a pretentious dull ponsey film. And Bruce Willis gets second billing on the front cover. Ha, another joke. He is in it for all of 10 minutes and does next to nothing again. And the poor viewer is supposed to be left with this big gap in the movie after his character is shot dead. I just think Wills, yet again wanted to do as little as possible the lazy #@**i. Once again he sounds and looks like he reading from a Q card and the death scene is rubbish.

On the front cover critics have described this film as a "triumph" and an "instant classic". Nothing, but nothing could be further from the truth.

....... after trying to watch the steaming pile of poo I ditched all of the rubbish Bruce Willis DVDs and Blu-rays from my collection. All those lazy unwatchable and embarrassing films of late. The ones I left in my collection are Once Upon A Time In Venice and Death Wish. I then realised that there were other Bruce films from further back so I trimmed more fat from my shelves with Bandits, Perfect Stranger and Lay The Favourite. Film's I really hate. Hate so much my nose bleeds. From now on I'm not buying any of these BW straight to Blu-ray ever again until I've researched them more. F*** this body of work ****. If Bruce can't be bothered, then I can't!

Malcolm McDonald
2.0 out of 5 stars Motherlessly Slow & Boring.
Reviewed in the United Kingdom on 18 April 2020
Verified Purchase
Not very exciting.Its not meant to be,it plays like a kind of Marlowe with Edward Norton playing the Marlowe part,but the character has an annoying tick,a nervous twitch.Bruce Willis does his now usual 15 minutes and he heads a private investigation bereau.Its all a confusing mess actually and I like private eye mysteries but this has nothing but a jazz club a girl and a very tall villain,oh,and of course Alec Baldwins usual shouting annoying character.The only thing that rescues this from a one star rating is Willem Defoes character,I can never tire of Willem Defoe.Edward Nortons been here before with the same character he played in The Score with Robert De Niro and Primal Fear with Richard Gere.Film,slow,confusing and boring.
Read more
2 people found this helpful
Helpful
Comment Report abuse

ugly betty
2.0 out of 5 stars Boring
Reviewed in the United Kingdom on 13 June 2020
Verified Purchase
I tried to like this film but it was so boring that I really didn't care who the killer was.
Read more
One person found this helpful
Helpful
Comment Report abuse

bobbbbbbbb
5.0 out of 5 stars Ignor the negative reviews
Reviewed in the United Kingdom on 21 June 2020
Verified Purchase
great film. no, not fast paced of flashy, but a proper film, the sort we get too few of these days. If you like films with more plot that special effects, try this
Read more
Helpful
Comment Report abuse

Julia27
5.0 out of 5 stars Motherless Brooklyn DVD
Reviewed in the United Kingdom on 15 July 2020
Verified Purchase
With such a good cast, I thought that this would be a brilliant film. However, I found it hard to follow & gave up half way through.
Read more
Helpful
Comment Report abuse
See all reviews from the United Kingdom
Unlimited One-Day Delivery and more
Prime members enjoy fast & free shipping, unlimited streaming of movies and TV shows with Prime Video and many more exclusive benefits.
> Get Started