I Am More Than What You See and over 8 million other books are available for Amazon Kindle . Learn more
Share <Embed> 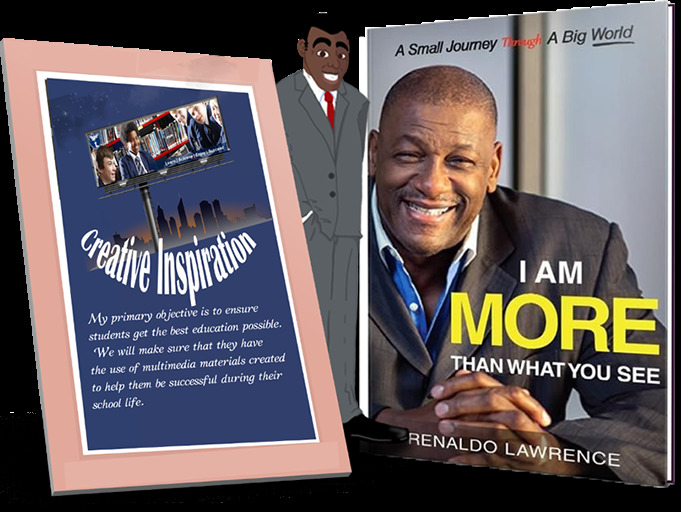 I Am More Than What You See: A Small Journey Through A Big World Paperback – 2 Dec. 2017

Start reading I Am More Than What You See on your Kindle in under a minute.

Renaldo Lawrence grew up in St. Matthews, South Carolina and has always known that his life was meant to be one of servitude just like his mother. After high school, where he won a basketball championship, he went on to play for Glen Dehart at Lancaster Junior College and then on to Appalachian State University where he won two championships and played for the hall of fame coach Bobby Cremins. After graduating from Appalachian State University, he was drafted by the San Diego Clippers. Over Mr. Lawrence's career, he played in a variety of countries such as South America, Finland, Argentina, Sweden, Russia, and Ireland. While playing in England, Renaldo ended up the 4th leading scorer in the history of British basketball. He also scored 73 points in a single game which landed him in the Guinness Book of Records. Renaldo also holds numerous scoring records of 40 and 50-point games. Renaldo is a motivational speaker and currently employed at Glyn School in Epsom, Surrey, England, where he develops and deploys interactive learning resources for staff, faculty, parents, and students as an Information and Communications Technology teacher. He consults and trains across the United States and Europe on how to create and use digital media, web design, and e-learning applications in the classroom. Renaldo is an Lynda.com/LinkedIn author, Adobe Education Leader, Advanced Skills teacher, Apple Distinguished Educator, Microsoft Innovative Educator and Educator Developer. Renaldo holds his master's in education. You can view some of Renaldo's work at Lynda.com (http://bit.ly/2jsuCdh) I don't think the last two lines need to be there but I wasn't sure if it was something he was definite about keeping on the back of the book! I did change a few things and did a few minor touch ups!

5.0 out of 5 stars
5 out of 5
16 customer ratings
How does Amazon calculate star ratings?
Amazon calculates a product’s star ratings based on a machine learned model instead of a raw data average. The model takes into account factors including the age of a rating, whether the ratings are from verified purchasers, and factors that establish reviewer trustworthiness.

TLC
5.0 out of 5 stars I can't put it down - but I have to get to work!
Reviewed in the United Kingdom on 20 December 2017
Verified Purchase
What a great inspiring read Renaldo!
I laughed all through Chapter 4 with all your stories and imagining the mischief you had.
What I love unlike any other book I've read is that you've included "Reader Questions" after each chapter to make us really think about not only what we are reading but how we can implement it in our own lives day to day. Genius!
Huge congratulations on a book that really will touch people far deeper than just " a read". Cant wait to get home after work and pick it back up....

Amazon Customer
5.0 out of 5 stars Easy read and has changed the way I approach different aspects of my life 5*
Reviewed in the United Kingdom on 12 December 2017
Verified Purchase
I’ve always been interested in personal development, this book covers so many different aspects of life and it’s content is easy to read and relates to every day life, from our way of thinking and how we can change our outlook on our thoughts, life and actions. 5*
Read more

Oldmead
5.0 out of 5 stars Written from the heart
Reviewed in the United Kingdom on 21 December 2017
Verified Purchase
I have been fortunate to work alongside Renaldo and he is a much valued colleague and friend. In this book the man opens his heart and his soul, taking the reader from his early days, through opportunity, racism, sport and sheer determination, to the selfless educator that he is today. This book brings the reader to the core of what education is all about. Read it!
Read more
Helpful
Comment Report abuse

Simon Uttley
5.0 out of 5 stars A light shining through the gloom.
Reviewed in the United Kingdom on 20 December 2017
What a great book from a man who lives authentically and wants the same for other young people. Brave, reflective and frank this journey is not about the few - the elites - but rather a practical guide that all may embrace. Written with the compelling warmth of the writer himself this book will raise the spirit, gladden the heart and shine as a lighthouse on the sea of uncertainty through which the young - and not so young - must navigate.
Read more
One person found this helpful
Helpful
Comment Report abuse

rachael bell
5.0 out of 5 stars A truly inspirational read
Reviewed in the United Kingdom on 3 January 2018
What a truly inspirational book. I suffer with Anxiety and depression and this book has definitely helped me get guidance in my life, work towards my goals, motivate me in my personal and professional life and it’s given me the reason to get up and go! I am truly touched and inspired by this book it’s a wonderful read and I can’t wait to venture into this new year with my new positive mentality
Read more
Helpful
Comment Report abuse

Ore Apampa
5.0 out of 5 stars So much encouragement...
Reviewed in the United Kingdom on 26 September 2019
Wow Renaldo! Your book is very encouraging. For me, it was a great reminder of the many things to be grateful for as well as the fact that one has to be deliberate in setting and working towards life goals. I particularly loved the section on "I AM". Thank you for sharing your story.
Read more
Helpful
Comment Report abuse

Charlie N.
5.0 out of 5 stars Inspiring
Reviewed in the United Kingdom on 30 December 2017
A truly inspiring read, great for self development, Renaldo is clearly very passionate and speakers greatly from experience. Recommended to me by a friend, I highly recommend this book to others. Great stuff.
Read more
Helpful
Comment Report abuse
See all reviews from the United Kingdom

Princess689
5.0 out of 5 stars Inspirational from Start to Finish!!
Reviewed in the United States on 18 January 2018
Verified Purchase
What an inspirational read. I think Renaldo could have titled this book "You Are More Than You Think". (Maybe he'll write a sequel!) He talks about what life was like for him growing up in Saint Matthews. Being from St. Matthews myself, I know that his book is based on truth. I wish others would read his story and be inspired to see the greatness in themselves and act on it. Thanks, Boo Lawrence, for a finally listening to Mudd and writing this book!!
Read more
Helpful
Sending feedback...
Thank you for your feedback.
Sorry, we failed to record your vote. Please try again
Report abuse

Shirley
5.0 out of 5 stars This book is awesome, it is inspirational, informative, funny and engaging. It is a must read.
Reviewed in the United States on 18 December 2017
Verified Purchase
This book is inspirational, informative, funny and engaging. I started reading and couldn't stop. I love the thought provoking questions and the emphasis on the why and writing down your goals. There were so many takeaways from the book. Thanks for sharing. I am so proud of you and your accomplishments. It will not be a book I read once, I will revisit it. I passed it to Kiki because hers hasn't arrived. #proudsister#.
Read more

One person found this helpful
Helpful
Sending feedback...
Thank you for your feedback.
Sorry, we failed to record your vote. Please try again
Report abuse

judy ray
5.0 out of 5 stars Five Stars
Reviewed in the United States on 21 December 2017
Verified Purchase
Great story! Great inspiration for young and old! Started reading when first received and didn't stop til I finished.
Read more
One person found this helpful
Helpful
Sending feedback...
Thank you for your feedback.
Sorry, we failed to record your vote. Please try again
Report abuse

Rose Lawrence
5.0 out of 5 stars Five Stars
Reviewed in the United States on 31 January 2018
Verified Purchase
Fabulous book, this book make you see yourself differently and see how to improve.
Read more
Helpful
Sending feedback...
Thank you for your feedback.
Sorry, we failed to record your vote. Please try again
Report abuse