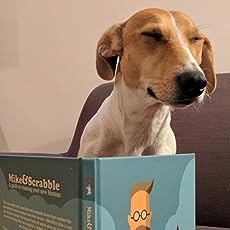 Follow to get new release updates and improved recommendations
Mike Dicks (1967-) was born in Bishops Stortford, England, he grew up in Hertfordshire and Cambridgeshire and then moved around a lot having what is best described as a 'portfolio career,' and a life of creating anecdotes about himself. Mike lives by the sea in Brighton, England with his dog, and co-author, Scrabble. His first book, "Mike&Scrabble" will be released in early 2017.
Read more 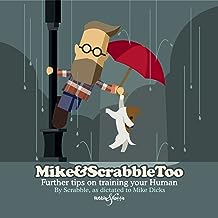 Mike&ScrabbleToo: Further tips on training your Human 24-Jul-2017
by Mike Dicks
( 3 )
£7.49 £9.99
The relationship between dogs and humans has been evolving for tens of thousands of years, but it was only when Scrabble began writing about this from a dog's perspective that humans realised the true nature of their 'Best Friend' status. You could read an academic guide to understanding this friendship, and you probably should, but you should also flick through the thoughtful, insightful and funny thoughts of this rather clever dog.

Mike&ScrabbleToo is the difficult second album or the awkward sequel to Mike&Scrabble. It represents the collected posts and tweets of our dynamic duo from the summer of 2016 to 'it's Christmas,' and reflects the changing nature of their relationship – as well as the improving drawing skills of Scrabble's chosen illustrator, Mike.

This book features more flights of fancy, more smiles and fewer moments of sadness than Scrabble's first offering: if you really enjoy melancholy, you should buy it and write a bad review. 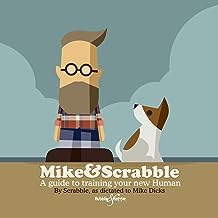 Mike&Scrabble: A guide to training your new human 06-Jun-2017
by Mike Dicks
( 20 )
£6.99 £9.99
There are many wise, practical, and academic books that explore the relationship between pets and their owners; Mike&Scrabble is not one of them. Instead, this picture book for adults gives an insight into the mind of a dog who has acquired a slightly damaged human, and sets about trying to train him.

Mike&Scrabble's simple illustrations and one-line observations were originally designed by Mike, despite what Scrabble says, as posts for Twitter and Facebook, to joke about becoming a dog owner. The posts gathered a following of loyal fans, mainly dog owners (about 90%), mainly women (about 55%), and mostly English or American (70%). Except for one fan in Vietnam.

This is a book that dogs will buy, but as they have trouble using an iPad and don't keep money on them, it may well be attractive to their Human pets.