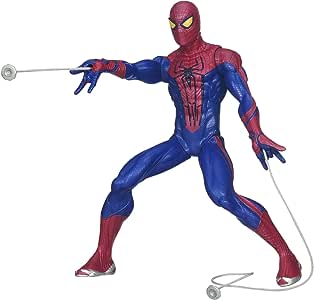 1 / 11 / 1
Previous page
Next page
Is this feature helpful?
Thank you for your feedback.
Share
Have one to sell? Sell on Amazon

by Marvel
3.5 out of 5 stars 77 ratings
Available from these sellers.
› See more product details

Technical Details
Additional Information
Feedback
Would you like to tell us about a lower price?
If you are a seller for this product, would you like to suggest updates through seller support? 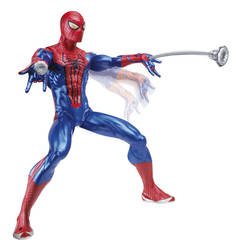 This 13-inch-tall figure features two motorised string web shooters, so you can create awesome web-blasting action, just like The Amazing Spider-Man. Blast webs with the push of a button and hear cool web-slinging sounds that activate with every blast. You can imagine you're battling one of the Web Slinger's most powerful enemies as you take aim at the included cut-out target of The Lizard. 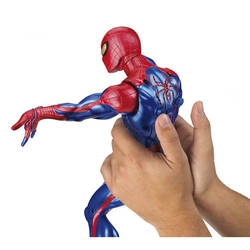 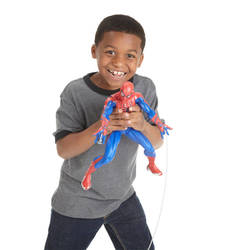 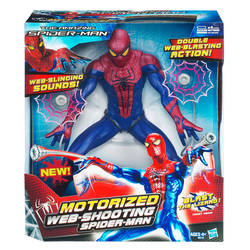 Trigger awesome web blasts with the push of a button with this mega-sized Motorised Web Shooting Spider-Man figure. Fire a quick shot from the figure's right or left hand. Each blast activates cool web-slinging sounds, and with a cutout target of The Lizard included, you can battle the villain from The Amazing Spider-Man movie.

There's a new species of lizard on the loose. The villainous super-reptile The Lizard has put the world in danger. The Amazing Spider-Man has to stop him. The Web Slinger will need all of his powers to battle The Lizard and protect the world from evil.

At 13 inches tall, your Motorised Web Shooting Spider-Man figure is ready for big action. Fight awesome Spider-Man battles with two motorised web blasts. Blast left, then blast right. When you press the button to activate the blast, the Web Slinger's arm moves to fire. The web shoots out of his hand, just like The Amazing Spider-Man. Create awesome web-slinging action and imagine you're helping Spider-Man fight crime and protect the city he calls home.

No battle would be complete without a villain, so Motorised Web Shooting Spider-Man comes with a cut-out target of The Lizard. Just because he's a reptile doesn't mean you can't still hit a bull's-eye.

With two motorised string web shooters and web-slinging sounds, this figure lets you create awesome Spider-Man web-shooting battles. Simple push-button controls make it easy to blast webs. Activate the web blasts with two buttons on the figure's back: one button for the right blast, one for the left blast. Press one button and fire a shot. A string web-blast shoots out of the Web Slinger's arm.

The Motorised Web Shooting Spider-Man figure comes with a cutout target of The Lizard and instructions. It requires 4 x AAA batteries and is suitable for ages 4 years and up.

susan110
2.0 out of 5 stars not impressed
3 December 2012
Verified Purchase
i bought this for my 4 year old spiderman fan. hes been asking for it and was super excited when he unwrapped it on his birthday. after realising it needed 4 AAA batteries (which they couldve supplied for the price!) i put them in and pressed the two buttons on the back which are supposed to make the web shoot out. Well we wernt impressed at all, the web doesnt shoot out, it kind of flops out, and only if you push the buttons really hard which can be tricky for little fingers. the noise it makes sounds cheap and very unrealistic, and the figure itself is fixed into position so isnt very fun to play with. on the upside it is big and chunky which makes it durable. thats the only good thing i can say about it. very expensive for what it does.
Read more
Helpful
Comment Report abuse

Ann Hamilton
5.0 out of 5 stars The Amazing Spider-Man Motorised Web-Shooting Figure.
29 October 2012
Verified Purchase
I bought this because my grand-daughter loves Spider-Man and I thought this was ideal for her birthday. She loves it and spends hours playing with it. She uses her imagination dealing with all Spider-Man's enemies and saving the world from evil and wickedness. It was a great buy and she won't grow out of it for the foreseeable future so well worth the money.
Read more
13 people found this helpful
Helpful
Comment Report abuse

KI
5.0 out of 5 stars Marvel The Amazing Spider-Man Motorized... excellent !
11 August 2017
Verified Purchase
3year old nephew loved it, it was much bigger than he expected and solid. The buttons on the back as mentioned are sturdy so it takes getting used for him and he needed help to push firmly .... better as it means will last and not fall to bits! For the price I paid was value for money!
Read more
Helpful
Comment Report abuse

C. Whitehead
3.0 out of 5 stars Happy Kids, for half hour
16 May 2013
Verified Purchase
I bought one of these for each of my young boys.
Its much larger than I expected and it feels sturdy and well made which is good.
It does exactly what it says in the description which isn't too much.
I only paid £15 each for these from Amazon so for that price I'm not too disappointed and despite the headline the boys do return to these from time to time.
I would recommend but only if you can get them at the right price.

S. Golds
5.0 out of 5 stars very pleased!
6 December 2012
Verified Purchase
im very pleased to have only payed £14.99 the price seems to have gone up now quite alot, its alot bigger then expected which is great and the low price meant i could buy 2! one for each of my sons so all in all i got 2 of these for the price of one :) they are xmas presents so havent been played with yet but they look fab!! really happy with my purchase
Read more
Helpful
Comment Report abuse

Amazon Customer
5.0 out of 5 stars Nice toy for a kid who fans a Spiderman
5 September 2013
Verified Purchase
To start with, i got this really cheap from Amazon Warehouse - somebody did not like it.

Nice details and seems to have good quality. Shooting the web is nice feature but sometimes it fails to do it properly - motor has its limits and safety feature stops the string if gets stuck somewhere. So actually it has to fail if someting is not right.

My kid has a lot of fun with it, so its worth every little penny I paid (i remind that i did not pay the full price which seemed a bit too pricey anyway)

Cliente Amazon
5.0 out of 5 stars a family fave
20 October 2013
Verified Purchase
brill toy...hardcore spidey fans in the house love this toy. i thought it was going to be tiny but it is a really decent size. just need to be careful where he slings that web, could go in a kiddie's eye if left unsupervised.
Read more
One person found this helpful
Helpful
Comment Report abuse