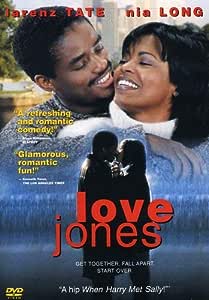 Rated: Unrated Format: DVD
4.7 out of 5 stars 363 ratings
Region 1 encoding. (This DVD will not play on most DVD players sold in the UK [Region 2]. This item requires a region specific or multi-region DVD player and compatible TV. More about DVD formats)
Note: you may purchase only one copy of this product. New Region 1 DVDs are dispatched from the USA or Canada and you may be required to pay import duties and taxes on them (click here for details) Please expect a delivery time of 5-7 days.

Love Jones (DVD)Darius Lovehall is a young black poet in Chicago who starts dating Nina Moseley, a beautiful and talented photographer. While trying to figure out if they've got a "love thing" or are just "kicking it," they hang out with their friend, talking about love and sex. Then Nina tests the strength of Darius' feelings and sets a chain of romantic complications into motion.]]

4.7 out of 5 stars
4.7 out of 5
363 customer ratings
How does Amazon calculate star ratings?
Amazon calculates a product’s star ratings based on a machine learned model instead of a raw data average. The model takes into account factors including the age of a rating, whether the ratings are from verified purchasers, and factors that establish reviewer trustworthiness.
Top Reviews

UK customer
1.0 out of 5 stars Buyers beware!
Reviewed in the United Kingdom on 14 January 2020
Verified Purchase
I was very disappointed after waiting a month to receive the dvd, it did not play. I saw other customers complain about dvds not playing on UK DVD players but expected this to work on a computer. The seller does not clearly label in simple terms where the dvd can be played and ships this to the UK with no confirmation despite previous complaints. I am not convinced the dvd works at all, as it does not play on a computer either. When I queried this, I was advised I could return the dvd at my own cost, which does not seem acceptable. Buyers beware!
Read more
Helpful
Comment Report abuse

Slizzy
1.0 out of 5 stars Doesn’t work on U.K. dvd player
Reviewed in the United Kingdom on 13 December 2017
Verified Purchase
Not able to view on a U.K. DVD player so why sell to a U.K. market?!?
Read more
4 people found this helpful
Helpful
Comment Report abuse

Sweet P
5.0 out of 5 stars love this film, sweet love story!
Reviewed in the United Kingdom on 19 December 2007
Verified Purchase
I firt saw this film, 10 years ago when i was 19 and i didnt appreciate it, but i just purchased it and watched it again and realised what a good film it is. Basically, man and woman meet and realise that love and relationships are not as simple as you think, its full of good sex and games which can lead to make ups and breaks ups but ultimately communication and trust are the key.

The acting is good and so is the pace of the film, its short enough to keep you interested and long enough so you get to know the characters and want things to work out for them. I really think this is a sweet film and worth buying!

R&BSH
5.0 out of 5 stars Appreciable!
Reviewed in the United Kingdom on 12 November 2018
Verified Purchase
Watch this so that romance is not stilted.
Read more
Helpful
Comment Report abuse

Cheex
5.0 out of 5 stars Film for couples!
Reviewed in the United Kingdom on 15 March 2013
Verified Purchase
I had heard about the movie through a friend who recommended that I should watch it, and I can see why.. Love comes in many forms, has up and downs, so many people who watch this would be able to relate, or knows someone who has been through it at some point. Even after nearly 16 years since the movie was released, it still holds its own.You can see the chemistry between the two which is interesting to watch and you do feel drawn to them as characters, so in theory every man wants a woman like Nina or at least similar in terms of her mind-set, and every woman wants a man like.... you know the rest. A sensual, sexy, and beautifully-made movie.
Read more
Helpful
Comment Report abuse

Amazon Customer
3.0 out of 5 stars Blatant Rip-Off Of "Mahogany"!
Reviewed in Canada on 20 November 2017
Verified Purchase
The movie was "okay"; I found it to be a blatant rip-off of the film "Mahogany" which is ironic because Nia Long's character mentions actor Billy Dee Williams's name to the character "Hollywood" and Larenz Tate's character was a "playa"! Lisa Nicole Carson's character had sex on the brain! The movie had its moments but I really did not care for it! The characters moved too fast and they seemed as though they didn't know what to do with themselves! The ending was alright but this was not a good movie by any stretch of the imagination!
Read more
Helpful
Sending feedback...
Thank you for your feedback.
Sorry, we failed to record your vote. Please try again
Report abuse

Cordelia
5.0 out of 5 stars Love Jones was the movie of the time
Reviewed in Canada on 17 September 2016
Verified Purchase
LOVE this movie.
Read more
One person found this helpful
Helpful
Sending feedback...
Thank you for your feedback.
Sorry, we failed to record your vote. Please try again
Report abuse

Jose Vazquez
5.0 out of 5 stars The Most Overlooked Romance Movie of the Era: You have to Watch This At Least Once!
Reviewed in the United States on 12 November 2013
Verified Purchase
One of my favorite movies of the era, Love Jones is a look into the Black Intelligentsia of Chicago in the early Nineties. Using the vivid art scene available in Chicago as a back drop, the story revolved around the off again, on again romance of Nina, and educated photog, and Darius, a writer working on his novel. The circumstances of modern dating and the games many play while dating work to keep them from accepting the simplicity of their love until near the end, but the journey is fun and a movie I watch at least once a year. This is great for those couples who are looking for a romance story for a saturday night as a reaffirmation of love, or at least loves possibility.
Read more
15 people found this helpful
Helpful
Sending feedback...
Thank you for your feedback.
Sorry, we failed to record your vote. Please try again
Report abuse
Load more international reviews

Jazzy Belle
3.0 out of 5 stars DVD quality is poor
Reviewed in the United States on 18 February 2019
Verified Purchase
Great cast and the story is cute- but more time was spent showing them separated than actually together, so I had a hard time buying them as soulmates.
DVD is problematic. Cheap case. Picture and sound quality poor. Dark and hard to see, had to turn the volume way up in order to understand the dialogue.
Read more
3 people found this helpful
Helpful
Sending feedback...
Thank you for your feedback.
Sorry, we failed to record your vote. Please try again
Report abuse

Ash
5.0 out of 5 stars My favorite movie!
Reviewed in the United States on 30 December 2018
Verified Purchase
I’ve watched this movie so many times that I ruined my old DVD. This was a great purchase; it plays well and was a great price l.
Read more
2 people found this helpful
Helpful
Sending feedback...
Thank you for your feedback.
Sorry, we failed to record your vote. Please try again
Report abuse

Kimmie Baker
5.0 out of 5 stars Great
Reviewed in the United States on 17 June 2018
Verified Purchase
Added a classic to my collection. Great product
Read more
3 people found this helpful
Helpful
Sending feedback...
Thank you for your feedback.
Sorry, we failed to record your vote. Please try again
Report abuse

HONDA
4.0 out of 5 stars WHY DOESNT THIS COME ON CABLE OR TV?
Reviewed in the United States on 15 December 2009
Verified Purchase
an all time classic!!! i love this movie from begining to end just the journey of all the couples in the movie and thier situations and how they handle the ups and downs and just deal with problems everyone goes through in relationships i never get tired of watching it my friends always want to borrow it but never that is a no,no in my place either watch it here or its a no go i dont part with it for anything i either buy it for them as gifts when birthdays or christmas other than that you have to get your OWN COPY!
Read more
One person found this helpful
Helpful
Sending feedback...
Thank you for your feedback.
Sorry, we failed to record your vote. Please try again
Report abuse
Load more international reviews

Seevetgo
5.0 out of 5 stars Movie
Reviewed in the United States on 14 March 2011
Verified Purchase
I ordered this movie because I let someone borrow it and never received it back! This a love story that has it ups and downs just like real life. I like the characters (Larenz Tate, Nina Long, Bill Bellamy..) and they hit on some topics that men and women talk about at times. If you want to see a movie with break ups and make ups along with every day issues then you will enjoy this film. If you like poetry it has quite a few scenes of it as well.
Read more
One person found this helpful
Helpful
Sending feedback...
Thank you for your feedback.
Sorry, we failed to record your vote. Please try again
Report abuse

Rae
5.0 out of 5 stars My fave movie!!!
Reviewed in the United States on 27 January 2020
Verified Purchase
This movie is my favorite, as well as my daughters! This was her Christmas stocking stuffer!
Read more
Helpful
Sending feedback...
Thank you for your feedback.
Sorry, we failed to record your vote. Please try again
Report abuse

Ray St John
5.0 out of 5 stars WHAT A BEAUTIFUL MOVIE - A MUST IF YOU LIKE ROMANTIC MOVIES OF THE 90s.
Reviewed in the United States on 18 March 2012
Verified Purchase
After When Harry Met Sally and Sleepless In Seattle became such huge hits, it was a no brainier that in the 1990s we will see more movies in these same lines.

Unfortunately this movie didn't punched through as it should've.

What can I say, WHAT A BEAUTIFUL MOVIE....although it was done Urban Style...is GREAT...Just got the DVD and had to see it twice one after the other.

This movie features possibly one of the most underrated black actors of the 1990s LARENZ TATE. A very versatile actor who made a name with MENACE II SOCIETY and another 1990s gem called DEAD PRESIDENTS. I also recommend WHY FOOLS FALL IN LOVE!!

Rather than give you an overview of the movie which is what I usually do. I suggest you buy it, that is if you like Romantic movies from the 1990s.

I'm completely shocked why this movie wasn't a huge success. I will say that there is an amazing chemistry between LARENZ TATE and actress NIA LONG, who is beautiful and classy!!

This one has another 10 in my book and a must in my Romantic movies collection!!!