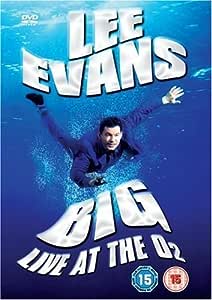 Rated: Suitable for 15 years and over Format: DVD
4.7 out of 5 stars 421 ratings
See more
Note: This item is eligible for click and collect. Details
Pick up your parcel at a time and place that suits you. How to order to an Amazon Pickup Location? Learn more

Lee Evans - Big - Live At The 02 was recorded at the world famous London 02 Arena in front of over 16,000 fans in October 2008. The five record breaking nights saw Lee perform to over 80,000 people. This DVD is the highlight of the record breaking Lee Evans - Big - UK Tour 2008 which took in over 59 dates in the UK's biggest arenas. The total ticket sales topped 500,000 which makes this the biggest ever comedy tour to date. Catch Lee at his peak with big stand-up, big effects and a big performance in what will be the biggest DVD of the year.

4.7 out of 5 stars
4.7 out of 5
421 customer ratings
How does Amazon calculate star ratings?
Amazon calculates a product’s star ratings based on a machine learned model instead of a raw data average. The model takes into account factors including the age of a rating, whether the ratings are from verified purchasers, and factors that establish reviewer trustworthiness.
Top Reviews

Jade Wootton
5.0 out of 5 stars Excellent DVD for a good laugh!
Reviewed in the United Kingdom on 11 July 2020
Verified Purchase
Purchased this DVD to replace old damaged one. It's a fantastic DVD and Lee Evans is hilarious. It's one of my fave Lee Evans live. The DVD arrived and is in immaculate condition and was just what I needed. If anyone hasn't seen this dvd and needs a good laugh they definitely need to see this.
Read more
Helpful
Comment Report abuse

katiecroc
5.0 out of 5 stars A must see
Reviewed in the United Kingdom on 28 July 2017
Verified Purchase
OH my goodness, i have not laughed this much in years. Hilarious and well made. Lee Evans does it again and i have watched this many time and still can not help but laugh. When out on my normal day i seem to find things he talks about and it brings me to laugh when I remember it . Efinately recommended.
Read more
One person found this helpful
Helpful
Comment Report abuse

constance
5.0 out of 5 stars Just LOVE this guy!
Reviewed in the United Kingdom on 20 November 2008
Verified Purchase
Saw Lee Evan in October at Wembley. Cannot add anymore than is written here already. The guy is an absolutely beautiful performer. And laugh???......I missed so many bits because I was laughing so much, at times I could not breathe, and knew I would have to wait until the DVD came out to catch up. I had some young teenagers with me at the show, and apart from a few bad words (which they all know anyway), I had no qualms about them being there. They all love Lee Evans anyway and he can do no wrong in their eyes, which is saying something....I would recommend this DVD to anyone. And 3 hours long...much more than your moneys worth. Truthfully, I would have been really happy to have seen him for an hour, so a 3 hour show was absolute bliss!! Thank you Lee...it was a pleasure to watch you...and I look forward to your next concert whenever that may be.
Read more
Helpful
Comment Report abuse

Wild Bill
5.0 out of 5 stars Lee Evans - comedy genius
Reviewed in the United Kingdom on 30 September 2013
Verified Purchase
I saw the abridged version of this show on television a few years ago.

Hugely enjoyed his enactment of the dodgy chatlines that feature on late night television, which has me roaring with laughter so much. These are just a few subjects that the legendary Mr Evans mention. Absolutely brilliant!

B. Franklin
5.0 out of 5 stars comical masterpiece
Reviewed in the United Kingdom on 24 November 2008
Verified Purchase
Having just lost out on getting tickets to see him live, i was counting the days for this dvd to arrive. Having been a huge fan of Lee's, owning his boxset with all his peformances, i didnt think anything could top his XL tour. Boy, was i wrong!
This performance is amazing. There just isn't another way of putting it. The show itself is 2 and a half hours, which just goes to show how much commitment Lee has towards his performances. He had the audience in stitches, and there is no doubt you will be as well at home. The XL tour is fabulous, but this tops it. His views on stuff from self serving counters, to his wife's habits,will have you begging for more.
The only dissapoint with the dvd is the bohemian rapsody isnt included on it, which is a huge shame as it was nice to hear he was performing it again. But apart from that, this DVD is perfect, with a 13 minute making-of video which is very entertaining as well.
This has got to be one of the best comedy shows of all time, and you can see why it is the UKs biggest tour ever.
Anyone who is a fan of Lee's work, buy this! Any one who isnt sure about him, buy this! You won't be dissapointed! Great value for money from one of the greatest comedians of all time.

Ellie Monks
4.0 out of 5 stars DVD
Reviewed in the United Kingdom on 12 July 2019
Verified Purchase
When my friends kids are in bed, he will watch this and he constantly thanks me for buying us it for him
Read more
Helpful
Comment Report abuse

K. Sneesby
4.0 out of 5 stars Christmas present
Reviewed in the United Kingdom on 1 February 2009
Verified Purchase
This was given to me for christmas by my husband. I love Lee evans, and i was disappointed at not being able to get tickets for his show at the o2, it was sold out within hours. So this was the next best thing, however after seeing the show, i thought he wasnt so funny as past performances, although the second half off the show was funnier, then the first half. Having said all that i still thought he was good, and i will still continue too watch him whenever and wherever he appears.
Read more
Helpful
Comment Report abuse

M. Lea
5.0 out of 5 stars Good dvd
Reviewed in the United Kingdom on 1 December 2019
Verified Purchase
Lee evans is funny and the dvd was in great condition
Read more
Helpful
Comment Report abuse
See all reviews from the United Kingdom