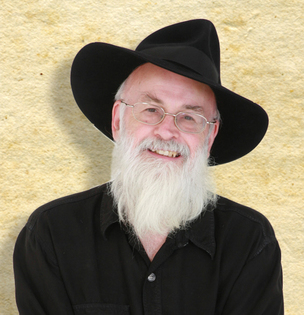 A new Discworld story is always an event. Terry Pratchett's The Last Hero is unusually short, a 40,000-word "Discworld Fable" rather than a full novel, but is illustrated throughout in sumptuous colour by Paul Kidby.

The 160 pages cover the series' longest and most awesome (but still comic) journey yet, a mission to save all Discworld from a new threat. An old threat, actually. Aged warrior Cohen the Barbarian has decided to go out with a bang and take the gods with him. So, with the remnants of his geriatric Silver Horde, he's climbing to the divine retirement home Dunmanifestin with the Discworld equivalent of a nuke--a 50-pound keg of Agatean Thunder Clay. This will, for excellent magical reasons, destroy the world.

It's up to Leonard of Quirm, Discworld's da Vinci, to invent the technology that might just beat Cohen to his goal. His unlikely vessel is powered by dragons, crewed by himself and two popular regular characters, and secretly harbours a stowaway. Before long we hear the Discworld version of "Houston, we have a problem..."

Kidby rises splendidly to the challenge of painting both funny faces and cosmic vistas. As Pratchett puts it, The Last Hero "has an extra dimension: some parts of it are written in paint!" New characters include Evil Dark Lord Harry Dread, who started out with "just two lads and his Shed of Doom", and a god so tiresome that his worshippers are forbidden chocolate, ginger, mushrooms and garlic.

He's been a legend in his own lifetime. He can remember when a hero didn't have to worry about fences and lawyers and civilisation, and when people didn't tell you off for killing dragons. But he can't always remember, these days, where he put his teeth ...So now, with his ancient sword and his new walking stick and his old friends -- and they're very old friends -- Cohen the Barbarian is going on one final quest. He's going to climb the highest mountain in the Discworld and meet his gods. The last hero in the world is going to return what the first hero stole. With a vengeance. That'll mean the end of the world, if no one stops him in time.

Sir Terry Pratchett is a publishing phenomenon. Among his many prizes and citations are the World Fantasy Life Achievement Award, the Carnegie Medal, the BSFA Award, eight honorary doctorates and, of course, a knighthood. In 2012, he won a BAFTA for his documentary on the subject of assisted suicide, 'Terry Pratchett: Choosing to Die'. He is the author of fifty bestselling books but is best known for the globally renowned Discworld series.

The first Discworld novel, The Colour of Magic, was published in 1983, and the series is still going strong almost three decades later. Four Discworld novels - Hogfather, Going Postal, The Colour of Magic and The Light Fantastic - have been adapted for television, with more to follow. His books have sold approximately 85 million copies worldwide (but who's counting?), and been translated into forty languages.

In 2007, Terry Pratchett was diagnosed with early onset Alzheimer's Disease. He died in 2015.

Paul Kidby discovered Terry Pratchett's Discworld in 1993 and since then has devoted his working life to the place. He is the illustrator of THE PRATCHETT PORTFOLIO, TERRY PRATCHETT'S DISCWORLD COLOURING BOOK, the bestsellers THE LAST HERO and THE ART OF DISCWORLD, as well as the Discworld DIARIES, cards, T-shirts, maps, mugs and, of course, the covers.