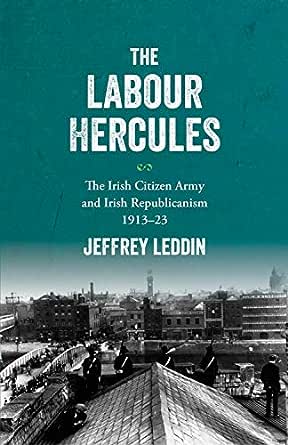 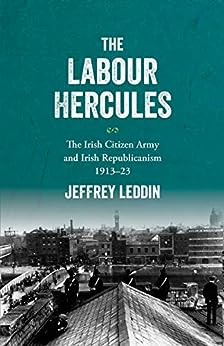 Jeffrey Leddin was awarded a PhD by the University of Limerick in 2017, where he is currently a Graduate Teaching Assistant. He was editor of volume 15 of History Studies, Ireland's oldest post-graduate history journal. --This text refers to the paperback edition.

4.3 out of 5 stars
4.3 out of 5
5 global ratings
How are ratings calculated?
To calculate the overall star rating and percentage breakdown by star, we don’t use a simple average. Instead, our system considers things like how recent a review is and if the reviewer bought the item on Amazon. It also analyses reviews to verify trustworthiness.
Top reviews

waynefitz
5.0 out of 5 stars Highly recommended for anyone interested in the birth of this nation or in revolutionary warfare
Reviewed in the United Kingdom on 10 July 2019
Jeffrey Leddin’s latest book looks at the formation of the Irish Citizen Army, which was born from the Dublin Lockout of 1913, and straight into the 1916 Easter Rising. The author looks at the established of the Irish Citizen Army in the latter end of 1913, where famous names like James Connolly, James Larkin and Jack White are leading the way.

This is an extensive survey of this troubled decade in Irish history, where the Irish Citizen Army, along with the Irish Volunteers raised up against our English masters to establish a new nation of proud revolutionaries and republicans through the War of Independence and into a Civil War – which split families and communities.

The Labour Hercules also dissects the Irish Citizen Army’s association with the Anti-Treaty republicans in the Irish Civil War.
This is highly recommended reading for anyone interested in the birth of this nation or in revolutionary warfare in Ireland.

Jeffrey Leddin was awarded a PhD by the University of Limerick in 2017, where he is currently a Graduate Teaching Assistant. He was the editor of volume 15 of History Studies, Ireland’s oldest post-graduate history journal.

As reviewed by Sgt Wayne Fitzgerald for the May issue of An Cosantoir (The Defender), The Irish Defence Forces Magazine - DFMagazine.ie
Read more
One person found this helpful
Helpful
Comment Report abuse

Amazon regular
5.0 out of 5 stars Well researched and highly readable
Reviewed in the United Kingdom on 3 May 2019
I have read and reviewed this most excellent book for the publisher and for an Irish American e zine and am happy to share my positive review with Amazon book buyers:
Jeffrey Leddin’s latest book charts the rise and activities of Irish Labour’s first urban working-class militia. The Irish Citizen Army came into being as a direct response to police brutality against strikers during the 1913 Dublin lock-out, and it grew as a powerful and well-trained workers’ defence corps. Organised by James Larkin, James Connolly and Jack White, the ICA volunteers presented a formidable force during those troubled years, protecting trade unionists and strikers against the violent attacks perpetrated by the notoriously partisan Dublin Metropolitan Police. Following the defeat of the strikers in early 1914, the ICA joined the struggle for Irish Independence, and the fundamentally different goals of syndicalism and nationalism inevitably became indivisible. The involvement of the ICA in such defining moments of Ireland’s history as The Easter Rising, the Irish War of Independence and the subsequent Irish Civil War is traced, and the value of its contribution to Dublin’s revolutionary movement is examined, as is the ICA’s relationship with the IRA.
Leddin’s book might well be described as a Herculean labour in itself, representing, as it does, commendably extensive research into a complex and pivotal era of Irish history. It draws on a very wide range of sources. Though it begins with the tumultuous year of 1913, it makes reference to the events and movements which had gone before and which had led up to the parlous state of social and industrial relations in Ireland just before the outbreak of World War One. This remarkably comprehensive work will prove invaluable to anyone studying twentieth century Irish history or, indeed, the era of working-class revolution in a European context, yet it is no dry tome. It is well written and highly readable. Personally, I might have preferred a less cumbersome title, maybe involving mention of The Starry Plough, but perhaps Seán O’Casey’s lyrical phrase has been over-used in other contexts and would be inappropriate in what is a factual, rather than romantic or nostalgic view of the times. To be fair, the book’s title is an apt description of its remit and this is a volume which would be a most worthy addition to anyone’s bookshelf.
Read more
Helpful
Comment Report abuse
See all reviews
click to open popover
Unlimited One-Day Delivery and more
Prime members enjoy fast & free shipping, unlimited streaming of movies and TV shows with Prime Video and many more exclusive benefits.
> Get Started