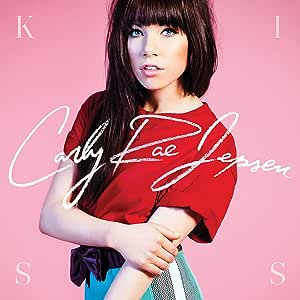 Carly Rae Jepsen Format: Audio CD
4.5 out of 5 stars 346 ratings
See all formats and editions Hide other formats and editions
Promotion Message No-Rush Reward. 1 promotion
Note: This item is eligible for click and collect. Details
Pick up your parcel at a time and place that suits you. How to order to an Amazon Pickup Location? Learn more
9 new from £6.50 10 used from £3.10

Deluxe edition includes three additional tracks, 2012 album from the Canadian Pop sensation. Although she's been an established artist in her native Canada for several years with a third-place finish on Canadian Idol, two gold singles, two albums, and two Juno Award nominations to her name, singer and songwriter Carly Rae Jepsen was a virtual unknown in the U.S. until February when fellow Canadian Justin Bieber began tweeting about a song he had heard on the radio while home for Christmas vacation: an irresistible track Jepsen had co-written called 'Call Me Maybe.' Following the announcement that he and his manager Scooter Braun had signed Jepsen to Braun's Schoolboy Records and Interscope Records, 'Call Me Maybe' began racing up the charts.

Let’s get the big question out of the way first. No, there’s nothing on this album that will rival Call Me Maybe in the startling ubiquity stakes. None of these songs will appear in YouTube parodies about Doctor Who or the Cookie Monster, and none of them have the power to barge into people’s lives – people who don’t like pop songs, people who don’t even have ears – and force them to be aware of its existence.

Not that this means Carly Rae Jepsen’s second album is a failure; very few pop stars have a song as demanding of the attention as Call Me Maybe. In fact, that one hit looms so large that when Tiny Little Bows, the first song, launches into a little “we just met” refrain, the familiarity of the idea reverberates far louder than the sampling and chipmunk-ification of Sam Cooke’s Cupid. Never mind the wilful desecration of the past; surely she has songs that aren’t about a first encounter?

Well yes, yes she does – she has loads. There are innocent songs about crushes, songs about finishing with a boy, songs about a first kiss; songs for would-be lovers who are a bit nervous about how everything works. Guitar String / Wedding Ring describes a love so humble that Carly would fetishise his rusty castoffs as if they were precious metal. It’s a young girl’s song of idealised passion, negating the self and ignoring all unsavoury physical reactions.

Or there’s Beautiful, a skippy acoustic redraft of that One Direction song with Justin Bieber playing the adoring boyfriend, or possibly Bruno Mars. Even when she plays the Ke$ha dirty stop-out role, in the witless Good Time – featuring Owl City – there’s precious little whisky on hand to clean her teeth. Everything has been wiped so clean even grammar can’t find a foothold.

There are no excursions into dubstep, no guest rappers and no raunchiness, just good clean wholesome party (as in jelly and ice-cream) fun. Kiss is chaste and tailor-made for anyone who finds Rihanna too ripe, Lady Gaga too weird and Katy Perry too all-over-the-place.

4.5 out of 5 stars
4.5 out of 5
346 customer ratings
How does Amazon calculate star ratings?
Amazon calculates a product’s star ratings based on a machine learned model instead of a raw data average. The model takes into account factors including the age of a rating, whether the ratings are from verified purchasers, and factors that establish reviewer trustworthiness.
Top Reviews

Ms. Isobel M. Mackenzie
5.0 out of 5 stars A great vinyl pressing of a great album!
Reviewed in the United Kingdom on 14 July 2015
Verified Purchase
Kiss is a very good pop album, obviously there's the smash hit "Call Me Maybe" one of the greatest pop songs of the last 10 years! However there are many great songs such as "This Kiss" "Your Heart is A Muscle" "Turn Me Up" "Tonight Im Getting Over You" & "Curiosity" and the album sounds even better on vinyl, its a high quality pressing and plays very well and the pictures of carly here are beautiful! Worth a purchase if you're a fan of pop and vinyl!
Read more
One person found this helpful
Helpful
Comment Report abuse

Elizabeth B.
5.0 out of 5 stars Perfect
Reviewed in the United Kingdom on 30 December 2018
Verified Purchase
Bought this as a present for my son who loves it and his existing one was scratched, he was thrilled. Delivery etc very quick
Read more
Helpful
Comment Report abuse

Red Baron
5.0 out of 5 stars Beautifully crafted pop album, no filler.
Reviewed in the United Kingdom on 12 November 2017
Verified Purchase
Bought this after liking it when I heard it on the sing movie....what a great album...yes it's pop, but done incredibly well and there's not one duff tune on this album.....
Brilliant

Anya
5.0 out of 5 stars Fab
Reviewed in the United Kingdom on 22 May 2017
Verified Purchase
Great tracks, Curiosity version on YouTube is better though
Read more
Helpful
Comment Report abuse