and over 8 million other books are available for Amazon Kindle .
Share <Embed>
Have one to sell?
Sell on Amazon
Flip to back Flip to front
Listen Playing... Paused   You're listening to a sample of the Audible audio edition.
Learn more
See this image 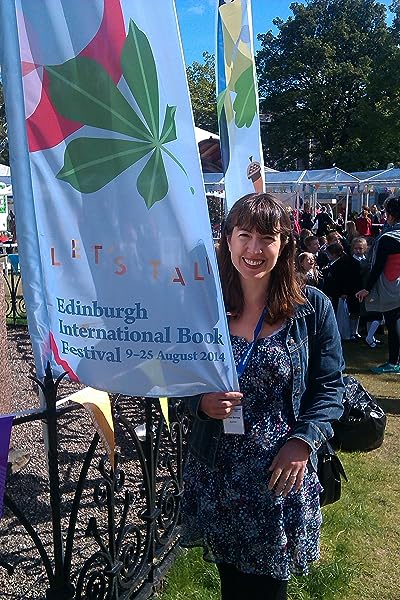 A great read from a bright new talent -- Guardian

Jessica, true to form, is still concentrating on her plans to win the Nobel Prize for Science - this time though she is trying a different tack - planning on making herself a TV star by presenting her own science show! At present though the TV companies aren't showing much interest. To distract Jessica from this problem is a feud that is growing up between her mother (still practising as a witch) and a newcomer to the area who is threatening serious competition as a rival magical practitioner. Knowing Jessica's mother, fireworks are sure to explode! Acclaim for "Jessica Haggerthwaite: Witch Dispatcher." - 'take a look at this unusual, funny little book that takes a sidelong glance at family relationships.' Amazon.co.uk. 'A great read from a bright new talent.' - "The Guardian". 'gives the standard domestic magical comedy some bright twists' - "Times".

Emma Barnes is a fantastically talented new star in children's publishing. This is her second children's book, her first being 'Jessica Haggerthwaite: Witch Dispatcher' for which she was shortlisted for the Branford Boase Award, an award for a first-time novelist, and she has recently been awarded an Arts Council Award. Emma lives in Yorkshire. Tim Archbold has illustrated, amongst many other books. 'Jessica Haggerthwaite' and also a picture book, 'Be Good Gordon'. Tim lives in Scotland.
Read more

4.5 out of 5 stars
4.5 out of 5
4 global ratings
How are ratings calculated?
To calculate the overall star rating and percentage breakdown by star, we don’t use a simple average. Instead, our system considers things like how recent a review is and if the reviewer bought the item on Amazon. It also analyses reviews to verify trustworthiness.
Top reviews

Mehajabeen Farid
5.0 out of 5 stars BRILL BOOK
Reviewed in the United Kingdom on 6 July 2008
Jessica Haggerwaite has a mother who is a witch, a father who is the gardener in a hotel owned by Robbie (one of Jessica's friends) Flotsam's father who's girlfriend is a woman, whose daughter is her enemy, who is the `Friend of the Wind Spirits'. Xandra claims that she can fly with the help of the spirits but even her own daughter hasn't seen her do it. To make it all worse, Xandra bets that Mrs Haggerwaite can't fly and Jessica's mother has many terrible attempts and ends up in hospital.

This book is well-written; it is exciting with enthralling dialogue that covers a number of important subjects; `Media Star' is action packed from cover to cover and never lost me attention all the way through. I loved it and would think that the book would probably fascinate the 9-13 age range.

D. Osborne
5.0 out of 5 stars It was great!
Reviewed in the United Kingdom on 14 July 2002
I quite liked the book and it was very exciting.
I liked it when jessica's Dad grew some tomatoes in the greenhouse. I liked one of the person's in the story called Robbie Flotsam and he was at jessica's school. Then in one part of the story when they had a bonfire outside. I thought that the
idea of being a professional witch is quite a bad idea. Then jeessica and her Dad thought that it was a very bad idea as well. Then they started to argue for a while. Then near the end jessica's Mum finally stoped the silly witch business and at last they were a happy family.

A Palmer
4.0 out of 5 stars Jessica Haggerthwaite: Best book ever
Reviewed in the United Kingdom on 25 October 2003
Jessica Haggerthwaite: MEDIA STAR is about Jessica fooling Xandra, friend of the wind spirits and her daughter. Xandra says she can fly and soon the rest of the village believe her. But, Mrs Haggerthwaite thinks differently. Who will fly? Who is telling lies? Buy this book to find out!
Read more
One person found this helpful
Helpful
Comment Report abuse

Caitlin McInnes
5.0 out of 5 stars It was AWESOME!
Reviewed in the United Kingdom on 15 July 2013
Emma Barnes's book was spellbinding, enchanting it was almost like Jessica's mum had cast a spell on me it was that good! The whole book fitted together like a puzzle!
Read more
Helpful
Comment Report abuse
See all reviews
Unlimited One-Day Delivery and more
Prime members enjoy fast & free shipping, unlimited streaming of movies and TV shows with Prime Video and many more exclusive benefits.
> Get Started