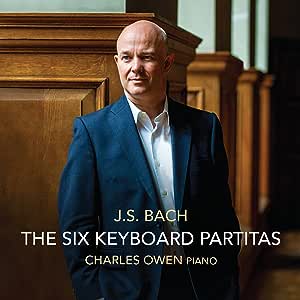 Charles Owen (Artist) Format: Audio CD
5.0 out of 5 stars 4 ratings
See all 2 formats and editions Hide other formats and editions
Promotion Message No-Rush Reward. 1 promotion
Note: This item is eligible for click and collect. Details
Pick up your parcel at a time and place that suits you. How to order to an Amazon Pickup Location? Learn more
7 new from £13.75 2 used from £9.87

Pianist Charles Owen presents a very personal interpretation of the Six Keyboard Partitas by J. S Bach, amongst the greatest literature for the keyboard.

"I have only once in my life listened to all six Partitas played on a single evening, [and] the sense of a journey, of being on a pilgrimage, was extraordinary." So says pianist Charles Owen regarding this set of compositions by J. S. Bach that are amongst the greatest literature for the keyboard. With this release Charles adds to his acclaimed discography that includes surveys of Faure's Nocturnes and Barcarolles.

He launched his release of Bach's Six Keyboard Partitas with a performance at London's King's Place on 8 October 2016, part of his own curated inaugural London Piano Festival.

"A class above the rest...His performances are underpinned by an unwavering musicality that is enhanced by close attention to the score." - International Piano

5.0 out of 5 stars
5 out of 5
4 global customer ratings
How does Amazon calculate star ratings?
Amazon calculates a product’s star ratings based on a machine learned model instead of a raw data average. The model takes into account factors including the age of a rating, whether the ratings are from verified purchasers, and factors that establish reviewer trustworthiness.
Top Reviews

Matthew Jackson
5.0 out of 5 stars Fantastic Bach from a pianist unknown to me.
Reviewed in the United Kingdom on 20 January 2017
Verified Purchase
Gentle and crystal clear Bach. Perfect Bach playing. Beautifully recorded. Thoughtful but never dull or academic. Best Bach disc I've bought. I have loads. All from a pianist I've never heard of!
Read more
Helpful
Comment Report abuse

N. Weeks
5.0 out of 5 stars Brilliant
Reviewed in the United Kingdom on 17 December 2017
Verified Purchase
Wonderful pianist. He really has a feel for Bach. Most enjoyable.
Read more
Helpful
Comment Report abuse

Amazon Customer
5.0 out of 5 stars Perfection!
Reviewed in the United Kingdom on 18 August 2017
Verified Purchase
Bach in the hands of Charles Owen is inspirational. I highly recommend his performance of the Partitas.
Read more
Helpful
Comment Report abuse

Amazon Customer
5.0 out of 5 stars A 2016 classical highlight.
Reviewed in the United Kingdom on 22 November 2016
One of the most beautiful and exciting classical records I've heard in years. The playing is sensitive, expressive whilst being extremely intimate - as if you're in the first row listening to a live recital. A necessary purchase for anyone who loves classical music, and an ideal purchase for anyone who plays classical music while working at their desk. Thank you Charles!
Read more
3 people found this helpful
Helpful
Comment Report abuse
See all reviews
Unlimited One-Day Delivery and more
Prime members enjoy fast & free shipping, unlimited streaming of movies and TV shows with Prime Video and many more exclusive benefits.
> Get Started