Into The Blight and over 8 million other books are available for Amazon Kindle . Learn more
Share <Embed>
Have one to sell?
Sell on Amazon 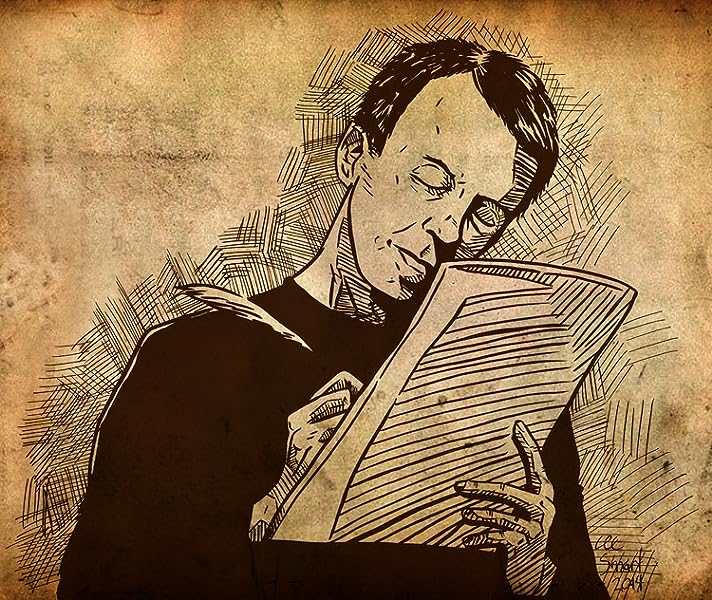 Start reading Into The Blight on your Kindle in under a minute.

4.7 out of 5 stars
4.7 out of 5
14 customer ratings
How does Amazon calculate star ratings?
Amazon calculates a product’s star ratings based on a machine learned model instead of a raw data average. The model takes into account factors including the age of a rating, whether the ratings are from verified purchasers, and factors that establish reviewer trustworthiness.
Top Reviews

Raziel
5.0 out of 5 stars A gripping fantasy tale from a writer to keep an eye on.
Reviewed in the United Kingdom on 8 August 2018
Verified Purchase
Into The Blight ticks many of the fantasy trope boxes, without falling into any of the associated traps.

We follow not just one quest but two, heading for the same objective for the complete opposite reasons, deep into a hellish, beast-haunted landscape known as The Blight. In order to fight the current ruler of Arran (an enormous, lethal and fiercely intelligent fire drake by the name of Saramanth) the Talarian people send a detachment to uncover something with enough power to take her on, and keep their lands from falling under the control of this fell creature.

So far, so simple. Big scary monster, people who want it dead, others are sent to stop them. But there is so much more to this. For one thing, I've just read the book, and I STILL don't know whose side I'm on. We are not talking a dragon sitting on a pile of gold, sending out occasional orders for Kentucky Fried Virgins to keep her from rampaging all over the shop, gobbling up miller's daughters and scaring the heck out of everyone. Saramanth is much smarter and far more interesting than that, and while there is an abundance of people who hate her for good reasons, there are plenty of others who think she's just about the best thing to ever happen to them. Who's right? Well... That's up to you.

Ward subverts your expectations at every turn and by the time you're into the third act, you're struggling to remember the last time you stopped to blink. In places funny, in places horrifying, it's a fine debut that demands a sequel just as soon as he can write one.

Andrew Robert Aston
5.0 out of 5 stars Excellent Tale of Adventure and Betrayal in a Cursed Land.
Reviewed in the United Kingdom on 31 December 2017
Verified Purchase
I have been a fan of Ward’s Firedrake setting ever since reading his short story ‘A Change in Leadership’ in Fox Spirit’s Wicked Women anthology. The idea of a nation ruled over by a semi-benevolent dragon (or ‘firedrake’) is one which intrigued me, and wasn’t something I had seen often prior to this.
Thus I was looking forward to a feature length continuation of this setting, and Ward doesn’t disappoint. Into the Blight covers the reaction of the wider world to Saramanth’s coup over the fantasy nation of Arran, in particular the dread of the neighbouring kingdom of Taleria and their attempt to find a counter to this by travelling to a disturbing realm of cursed magic and fantastical monsters, known only as the Blight.
It is a very narratively tight novel, following two main story strands, that of Captain Beth Lester who is sent to retrieve a legendary creature to face the firedrake, and Brin, last of the Bask, who is sent by Saramanth to stop them. Both sides are morally ambiguous, and become further compromised as they adventure across the Blight, but neither side outright slides into simple villain territory; both are justified in their intentions, even if the results are… well… bloody terrifying. The motivations of the Talerian faction has echoes of the cold war, with the soviet nuclear panic over America’s A-bomb, transposed into a fantastical setting. Dragons in a fantasy setting are WMDs which fundamentally change the game of war, and Ward gives this concept the dramatic heft it deserves.
Once the two factions get to the Blight, the story really picks up the pace and it never really lets up until the epic conclusion. The Blight’s gallery of bizarre fauna is interesting, unpredictable and an ever present source of tension.
Anyone who is a fan of complex, conflicted characters and eccentric monsters in their fantasy should look no further than Into the Blight. A thoroughly enjoyable fantasy romp. Highly recommended.
Read more
One person found this helpful
Helpful
Comment Report abuse

Viv Cooper
5.0 out of 5 stars Thoroughly entertaining read
Reviewed in the United Kingdom on 19 March 2018
Verified Purchase
I'll start my review with my favourite line from the book "I can give you truth or I can give you comfort but only one will help you live longer" it's a great line and I am lucky enough to be able to offer you both truth and comfort that will both be of help to you.

The truth is I really enjoyed this book, it moves along at a good pace, it's easy to keep track of who is who, where they are and what they are doing. The characters are engaging and understandable, even if I didn't agree with some of the choices they were making I could see how the logic worked for the character to reach their decision. I hope that we will see more from these characters and this author in the future.

So be comforted in the knowledge that should you purchase this book you will be getting a very entertaining read.
Read more
Helpful
Comment Report abuse

Nicki Webb
5.0 out of 5 stars A great read!
Reviewed in the United Kingdom on 18 November 2017
Verified Purchase
A gripping and imaginative novel which examines a conflict from the perspectives of a number of well developed characters. Cleverly constructed and pacy. Looking forward to the sequel!
Read more
Helpful
Comment Report abuse

James McNelledge Fadeley
5.0 out of 5 stars Excellent First Novel
Reviewed in the United Kingdom on 5 March 2018
Many first time novelists make the mistake of getting way too ambitious in their first venture. Rather, Jonathan Ward checks the most important boxes of what to look for in the Amazon-age of writers: strong prose that doesn't grind down the experience, an excellent pace that makes it a real page turner, and just the right amount of lore without burdening the reader with history lessons. Even if fantasy-military tales aren't necessarily your cup of tea, anyone can tell that Ward is the kind of writer you'll want to bookmark for later. Because when he writes themes to your taste, you're going to love it.
Read more
One person found this helpful
Helpful
Comment Report abuse

Amazon Customer
5.0 out of 5 stars Five Stars
Reviewed in the United Kingdom on 11 November 2017
A hidden gem, when is the sequel?
Read more
Helpful
Comment Report abuse
See all reviews from the United Kingdom

Domester
5.0 out of 5 stars Some very graphic scenes of violence, not for the young or queasy.
Reviewed in the United States on 13 July 2018
Verified Purchase
The first time author J. Ward has written a rich fantasy horror novel that kept me riveted from beginning to end. The two main characters are well developed and leave you wondering who is supposed to be the hero in this novel. That juxtaposition gives the book the great tension that keeps you turning the pages. I was also concerned about how Mr. Ward would handle the scenes in the nether world of the blight. It clearly was an opportunity that could make or break the book, making it believable or potentially making the book incredibly silly. It should go without saying he created a frightening and realistic world that leaves you anxiously awaiting what horrors will befall the lead characters and their companions next. I am not sure what Mr. Ward's next effort will be, whether it is a sequel to "Into the Blight" or a completely new venture, but I will have it at the top of my reading list when it comes out.
Read more
2 people found this helpful
Helpful
Sending feedback...
Thank you for your feedback.
Sorry, we failed to record your vote. Please try again
Report abuse

Anna Banana
5.0 out of 5 stars Great start out of the gate
Reviewed in the United States on 31 October 2017
Verified Purchase
Loved it! If you're looking for a riveting tale full of suspense, great character development, and fantastical beasts, this is the book for you! As an avid fantasy reader, this book is great. I love a story where nothing is black and white, you're not sure who the bad guy (or gal!) is and everything depends on context. The juxtaposition of the two main characters provides an excellent framework for this story that's a race to the finish line.

This book is a fast-paced, page-turner. Once I got down to it, I read in a matter of days. Let's support this author so that I can read the next chapter in this story! (No spoilers, but it MIGHT end in a tad of a cliffhanger)
Read more
2 people found this helpful
Helpful
Sending feedback...
Thank you for your feedback.
Sorry, we failed to record your vote. Please try again
Report abuse

James McNelledge Fadeley
5.0 out of 5 stars Excellent First Novel
Reviewed in the United States on 5 March 2018
Verified Purchase
Many first time novelists make the mistake of getting way too ambitious in their first venture. Rather, Jonathan Ward checks the most important boxes of what to look for in the Amazon-age of writers: strong prose that doesn't grind down the experience, an excellent pace that makes it a real page turner, and just the right amount of lore without burdening the reader with history lessons. Even if fantasy-military tales aren't necessarily your cup of tea, anyone can tell that Ward is the kind of writer you'll want to bookmark for later. Because when he writes themes to your taste, you're going to love it.
Read more
One person found this helpful
Helpful
Sending feedback...
Thank you for your feedback.
Sorry, we failed to record your vote. Please try again
Report abuse

Robert Daniels
5.0 out of 5 stars Dont think about it, get this book
Reviewed in the United States on 5 August 2018
Verified Purchase
I cant even put it into words how absolutely amazing this book is. I couldn't put it down. Was completely immersed into the world and characters. It is the best book I've ever read. The only book I've ever left a review on. Hoping for more.
Read more
One person found this helpful
Helpful
Sending feedback...
Thank you for your feedback.
Sorry, we failed to record your vote. Please try again
Report abuse