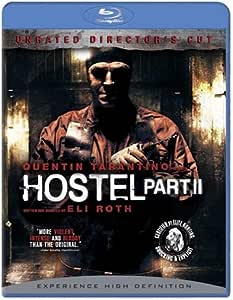 Arrives: Nov 5 - 7
Dispatches from: Amazon US
Sold by: Amazon US

Rated: Unrated Format: Blu-ray
4.3 out of 5 stars 458 ratings
See more
Note: This item is eligible for click and collect. Details
Pick up your parcel at a time and place that suits you. How to order to an Amazon Pickup Location? Learn more

Presented by Quentin Tarantino (Hostel, Kill Bill, Vol. 1 & 2) and written and directed by Eli Roth (Hostel, Cabin Fever), Hostel Part II is the shocking and gruesome sequel of the underground torture ring where rich businessmen pay to torture and murder their victims. The second installment to this terrifying franchise centers around three young American women (Lauren German, The Texas Chainsaw Massacre) (Bijou Phillips, Bully), and (Heather Matarazzo, Welcome to the Dollhouse) who are studying in Rome. A gorgeous, sophisticated European acquaintance invites the trio to join her for a weekend getaway at an exotic natural spa, assuring them they will be able to relax, rejuvenate and bond. The girls find themselves in Slovakia and check into the ill-fated Hostel, where they are poised to become victims for auction, pawns in the fantasies of the sick and privileged from around the world who secretly travel there to savor more grisly pursuits.

4.3 out of 5 stars
4.3 out of 5
458 global ratings
How are ratings calculated?
To calculate the overall star rating and percentage breakdown by star, we don’t use a simple average. Instead, our system considers things like how recent a review is and if the reviewer bought the item on Amazon. It also analyses reviews to verify trustworthiness.
Top reviews

Throda tzen
TOP 1000 REVIEWERVINE VOICE
4.0 out of 5 stars They're still watching Pulp Fiction!
Reviewed in the United Kingdom on 23 July 2015
Verified Purchase
This 2007 horror slasher seemingly starts where number one left off -but it's not necessary to see that first. Paxton [Jay Hernandez] awakes in a hospital bed and tells his tale then realises they are all part of the hunting club. Awakening from his nightmare he tells his girlfriend they are not safe. The action then switches to Rome, where 3 American girls strike up an acquaintance with a female model and are referred to a spa resort. Following a similar path to the first this leaves us with the thought of which one will get out alive: the nerd, the frivolous fun-lover or the level headed one.
Although we know the plot [from the first movie] and the first disappearance is late in coming, the atmosphere of this film is more intense and sinister than the first. This also has the added twist of developing the character depth of the monied killers whilst illustrating that for the procurers it's simply business. This makes the participants more `real' and 3 dimensional, which means that although there is less gore here than no.1, when it comes we identify with the characters more readily which adds to the intensity.
The disc opens to a anti piracy ad, then goes to main menu offering play, Audio [English or Italian], subtitles [English with or without commentary, on/off], scene selection, special features [commentaries, deleted scenes, gag reel etc] and trailers for 3 other movies.
I have no problem giving this a **** but the violence is quite unsettling. Anyone want to play football?

bloodandfootsteps
3.0 out of 5 stars Less of everything
Reviewed in the United Kingdom on 9 August 2014
Verified Purchase
Having enjoyed the gratuitous gore and flesh-fest that was Hostel I and having some time to myself for the next couple of weeks, what better way to spend it than by revisiting the Hostel series and going for Part II, I thought. I had read some of the reviews in the negative sense and thought that people were just being too squeamish, too judgmental and too sanctimonious. I suppose it was wrong of me, on this occasion, to think the opinions of the masses were irrelevant to me.

The first 30 mins or so of the film chart the journey of a group of girls to a hostel lured there by another girl who's a life model, drawing victims out of her classes for carriage over to Slovakia. The girl travellers check into a hostel and you know how it goes from there: they get auctioned, sold off and then used to their clients' whims. There is then an interesting change from the first film in that Hostell II follows the activities of two buyers from remote sale to being in the same room as the girls. One buyer chickens out from dishing out the torture and the other goes for his life. However, from this point on I found it increasingly hard to care. In the first film people, the victims are just treated as lumps of meat [as are the girls who solicit them]: the whole film is about the carnal disposable nature of flesh. However, in Hostel II Roth tries to inject a bit of personality and emotion into it by trying to get us to feel sorry for one of the girls. In short, we don't. We want her offed just like the little victim she is, we don't want to see glassy-eyed close-ups of her snivelling face. I won't go into detail, but sufficed to say she ends up getting the better of the situation, not the other way round.

Overall I felt the gore element was pulled punch in the film. The only exception to this is the scene where a female client bathes in the blood of a victim - Bathory-esque - after slitting her throat, but after this, things get a little tamer and my interest fleeted.

If you are coming to watch a film like this you must be expecting all-out insensibility on every level, and Hostel II just doesn't deliver, all the elements that were there in Hostel I are still there but just much less so. Or maybe I'm becoming too desensitised these days. The only upside was that I only paid £2 for the DVD [which was a dud so I had to end up watching it online anyway].
Read more
2 people found this helpful
Helpful
Comment Report abuse

Mr McComber
1.0 out of 5 stars Good special effects
Reviewed in the United Kingdom on 26 September 2014
Verified Purchase
I used to avidly watch Hostel, Saw, Wrong Turn, Hills Have Eyes, Frontieres etc but can't bear it now and not sure whether to give it one star or five, depends if close up torture detail is your thing. If it is, then buy, I can't bear to look so what's the point? Some of the plot makes little sense, though. If an angry woman who hates the c*** word had a knife around my meat and two veg, I know that's the one thing I wouldn't call her. Good special effects, so if you enjoy this sort of movie, read as a five star review. Bon Appetit!
Read more
2 people found this helpful
Helpful
Comment Report abuse

Ozymandias
5.0 out of 5 stars Best of the three!
Reviewed in the United Kingdom on 8 August 2015
Verified Purchase
The best of the three Hostel films, due to the best development of characters. Both the "clients" and the "victims" are better understood, and the plot therefore has more depth and believability. The way that the "brother" clients pan out is a nice idea in particular. It's not all that gory, only one scene is an exception to that really, but the film is still head and shoulders above the others in the series.
Read more
2 people found this helpful
Helpful
Comment Report abuse

TSMM
4.0 out of 5 stars great sequel
Reviewed in the United Kingdom on 20 April 2013
Verified Purchase
im not a huge gore horror fan,but hostel 1 and 11 stand head and shoulders above others of the genre,simply because of the great idea for the story,which is very believable..more believable than perhaps we care to imagine,what with recent revelations in the news,-as well as the eerie setting of eastern europe.And people who say this is really gory clearly havent seen the gorefest comedy of Braindead! I wont be getting hostel 3,btw!-Such a shame,as a definitive sequel to this would have been very interesting,if it had been done correctly.
Read more
One person found this helpful
Helpful
Comment Report abuse