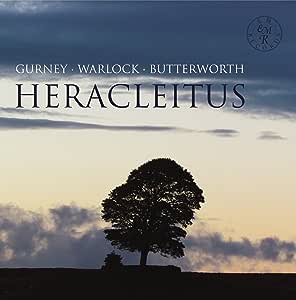 Includes FREE MP3 version of this album.
AutoRip is available only for eligible CDs and vinyl sold by Amazon EU Sarl (but does not apply to gift orders or PrimeNow orders). See Terms and Conditions for full details, including costs which may apply for the MP3 version in case of order returns or cancellations.
Note: This item is eligible for click and collect. Details
Pick up your parcel at a time and place that suits you. How to order to an Amazon Pickup Location? Learn more
Complete your purchase to add the MP3 version to your Amazon music library. Provided by Amazon EU S.à r.l.
11 new from £13.83 1 used from £20.76
Buy the MP3 album for £7.49 at the Amazon Digital Music Store.

This CD commemorates and celebrates the talents of a golden generation of English lyricists through the voices of the greatest song-writer composers of the era. The lives of two of these, George Butterworth and Ivor Gurney, remain inextricably linked to the catastrophic 1914-18 conflict played out over the fields of Flanders. The poignancy of their songs, selected and performed by tenor Charles Daniels, pianist Michael Dussek and The Bridge Quartet, comprise an intimate journal, encapsulating moods of innocence and naivety, transience and despair epitomised by the poetry of Housman and Gurney's 1919 song cycle 'Ludlow and Teme'. The Bridge Quartet also introduces two World Première recordings. Butterworth's miniaturist Suite for String Quartet (1910) is a eulogy to the 'untouchable England' before the First World War, but also a perfectly expressed prophetic warning from a young man extinguished in his prime. Gurney's epic nine-minute Adagio (1925) is a moving threnody from a survivor trying bravely to express in music the pain of living on with the consequences of what he encountered.

3.5 out of 5 stars
3.5 out of 5
2 customer ratings
How does Amazon calculate star ratings?
Amazon calculates a product’s star ratings based on a machine learned model instead of a raw data average. The model takes into account factors including the age of a rating, whether the ratings are from verified purchasers, and factors that establish reviewer trustworthiness.
Top Reviews

S. H. Smith
5.0 out of 5 stars A worthy commemoration of the Somme centenary
Reviewed in the United Kingdom on 1 July 2016
Verified Purchase
The centenary of the Battle of the Somme has prompted the appearance of several new recordings of music by English composers who were deeply affected by the First World War, especially George Butterworth, who was killed on the Somme, and Ivor Gurney who was in the thick of things, and whose already delicate mental disposition was tipped over the edge as a result of his experiences in the trenches.

Of particular interest on this intriguing new EM Records disc is the premiere recording of Butterworth's Suite for String Quartet (or Quartette, as he himself spelled it). It is a work of five short movements that saw the young composer on the cusp of his first (and only) maturity, with a glance back to the Germanic influence that had for so long held English music in its grip, but also a nod towards the English folk song tradition in which Butterworth was then immersing himself, and which was to bear fruit in the Two English Idylls and the Idyll 'The Banks of Green WIllow', as well as more indirectly in the Rhapsody 'A Shropshire Lad'. From this same period comes the better-known Bredon Hill song-cycle, all but one song of which is recorded here (not sure why 'Oh, fair enough are sky and plain' was omitted). The final two songs from the cycle 'Love Blows as the Wind Blows' - W.E. Henley settings with string quartet accompaniment - are also included. 'Fill a glass with golden wine' is particularly exquisite, with an intimacy especially enhanced by the quartet version. Critics often dismiss this song as the cycle's Achilles heel, and Butterworth himself omitted it from his orchestral transcription of the piece. See what you think.

Ivor Gurney is represented by his Housman cycle 'Ludlow and Teme'. It is fascinating to compare this work with Butterworth's treatment of texts from the same Shropshire Lad collection, with 'On the Idle Hill of Summer' here available for direct comparison. What immediately strikes the listener is the wide range of mood in these songs. Contrast, for example, the urgent, restless quality of 'When smoke stood up from Ludlow' with the rapt, languid feel of 'Far in a western brookland', and the skittish 'Tis time, I think, by Wenlock Town' which so belies the wistful nature of the poem.

Other Gurney settings included on this disc are three of his most distinctive songs: 'The Cloths of Heaven', a lyrically beautiful interpretation of an equally beautiful Yeats poem; 'Severn Meadows', an exquisite setting of his own verse, composed while he was on active service in the trenches; and the splendidly solemn 'By a bierside', a setting of John Masefield. The final Gurney piece on this recording is the world premiere of 'Adagio', a slow movement from a late string quartet (1924), written just two years before Gurney's mental state precluded all further composition. It was among a sheaf of manuscripts being catalogued by Gerald Finzi after Gurney's death which Finzi himself adjudged to be 'useless'. I leave it to the listener to pronounce on that judgement.

During the latter years of the war, Peter Warlock (alias Philip Heseltine) found himself in Ireland (Achill Island, to be specific). Some have speculated that his motive was to avoid conscription. Be that as it may, his new surroundings inspired his musical imagination to such a degree that the songs he wrote there, and shortly thereafter, are generally considered to be among his finest. The two included here, 'Heracleitus' and 'Sweet Content', are both world premieres in this version with string quartet accompaniment.

On this disc, the Bridge Quartet is joined by Michael Dussek (piano) and Charles Daniels (tenor) whose rather soft tone seems well-suited to the sensibilities of these composers. An excellent recording, with substantial, high-quality liner notes to match. All texts are included.