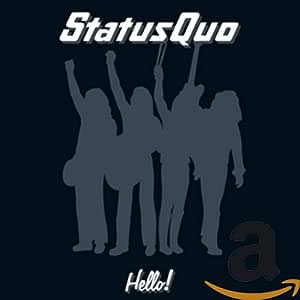 ‘Hello’ contains the band anthems ‘Roll Over Lay Down’, ‘Caroline’ and the live classic ‘Forty Five Hundred Times’. The album was originally released in 1973. This version has been mastered by Andy Pearce with the assistance of ‘5th band member’ Bob Young from the original tapes and has a bonus disc featuring three unreleased tracks from the band’s archive as well as alternative versions of ‘Caroline’ and a live track recorded at Reading Festival 1973.

4.6 out of 5 stars
4.6 out of 5
178 global ratings
How are ratings calculated?
To calculate the overall star rating and percentage breakdown by star, we don’t use a simple average. Instead, our system considers things like how recent a review is and if the reviewer bought the item on Amazon. It also analyses reviews to verify trustworthiness.
Top reviews

Mr Blackwell
TOP 1000 REVIEWER
5.0 out of 5 stars Hello... We Have Arrived....
Reviewed in the United Kingdom on 28 January 2019
Verified Purchase
2015 Deluxe Edition update... as with the Piledriver release this is a superb upgrade in sound,hats off to the mastering by Andy Pearce,top notch stuff.

Disc 1 : the original album class from start to finish, Caroline,Rollover Lay down,Blue eyed Lady and 4500 Times to name but four.

Packaging excellent ,great little booklet with quotes and finally a reproduction of the original poster that came the the vinyl way back in the day, a nice touch.

By general consensus this is the best Quo Album,although as usual i'll be different from the pack,i think QUO(1974) is their career best,however this is a superb album.
Quo were now on fire and from the metal boogie of 'Roll Over Lay Down' thru to the Epic '4500 Times' there is not a weak moment.Everyone's fav track 'Caroline still inspires a shake of the head and a grin on yer face,just perfect Quo.The rest of the disc is made up of light and shade rockers 'Softer Ride & 'And it better Now',the pop sensibilities of 'Claudie' & A Reason For Living' and finally the forgotten classic 'Blue Eyed Lady ( should have been a live favourite).

A magnificent album which should be noted was the start of Andy Bown's keyboards creeping in,it should be said fairly unobtrusively at this point,enhancing rather than overpowering.

RH
5.0 out of 5 stars Status Quo's Piece de Resistance
Reviewed in the United Kingdom on 27 October 2017
Verified Purchase
Back in the 1970s Status Quo was a band in its prime, rightly regarded as a very credible hard rock band and one of the best live acts in the world. During 1972-76 they released 5 classic studio albums of consistent high quality, Piledriver, Hello, Quo, On the Level & Blue for You. If you were listening to Quo for the first time I would recommend any one of these albums. However, my personal favourite & most fans favourite would have to be 1973s Hello with its distinctive black cover.
The album features two of Status Quos biggest hits and firm live favourites, Caroline and Roll Over Lay Down as well as high energy, fast tempo numbers such as Blue Eyed Lady, A Reason for Living & Softer Ride. In contrast there is the wonderfully melodic And its Better Now and the almost Beatle-esque Claudie. The album ends with the epic 9.50 minute 3 chord boogie anthem, Forty Five Hundred Times
This remastered version may only include the one bonus track Joanne (the b side to Caroline) but the sound quality is far superior to the original cd version and the closest yet to replicating the sound on vinyl.
As a footnote, after Blue For You they released the double album “Live which, along with Thin Lizzys Live & Dangerous & AC/DC’s If You Want Blood.., were the best live rock albums of the decade. Alas, 1977s Rockin all Over the World signalled the beginnings of a far more commercial “poppier” radio friendly sound influenced by more piano/keyboard based songs. This, in turn, led to the introduction of cheesy album sleeves and the end of the original line up when first John Coghlan and then Alan Lancaster left the band – Marguerita Time was just a (burning) bridge too far!
Read more
7 people found this helpful
Helpful
Comment Report abuse

The Punk Panther
HALL OF FAMETOP 10 REVIEWER
5.0 out of 5 stars Roll over lay down...
Reviewed in the United Kingdom on 2 March 2019
Verified Purchase
Status Quo produced perfect heads down, British blues rock, nothing more, nothing less. They should never be derided for it. This is probably their most obviously “Quo” album, packed full of riffs, pounding drums, Francis Rossi’s slightly nasal vocals and some searing guitar parts as well as the chunky riffs too. It continued the tradition of driving guitar boogie that had populated most of its predecessor "Piledriver"'s tracks. It was even more pronounced on here though - this was a full-on attack. "No nonsense" would describe it perfectly.

“Roll Over Lay Down”, often only played in its live incarnation, is great in is studio version too. A proper copper-bottomed Quo rocker, with a “false ending” quiet bit too. “Claudie” continues the riffage, with some Byrds/country rock-style jangly guitar in places. “Reason For Living” utilises the trademark Quo riff once more, to great effect. Sure, it has the same sound to it, but is a great sound, more power to it. It’s classic Status Quo, so just get your head swinging and enjoy it. There is a simple, beautiful perfection to it.

“Blue Eyed Lady” betrayed a few prog rock leanings in its initial intro, before kicking in to a full-on Quo riff and trademark Francis Rossi vocal. Just when you think the obligatory slow ballad is coming, up next is the barnstorming, archetypal Quo of “Caroline”. Maybe it is their signature song. You can’t go far wrong with it. From the very first notes it is Quo heaven. It has that wonderful extended intro and the rock doesn’t let up from beginning to end. It is based, as music snobs never tire of telling us, on very few chords. So what? They are great chords, and boy does it work. It is commonly thought that punk was the antidote to mid-seventies prog-rock's endless noodlings, doodlings and pretensions. Maybe this did it first. Not many ELP, Mike Oldfield, Yes or Greenslade fans had any time for Status Quo, did they? This was as "in your face" as glam rock as well, despite Quo's long hair and denim appearance. As a glam-rock loving proto-punk in 1973, I despised prog-rock (I have since re-assessed), but I loved this.

"Softer Ride" has a bluesy feel, particularly at the beginning, but that is soon blasted away by some sledgehammer riffery. It is seriously thumping and shakes your speakers. "And It's Better Now" has brief echoes of Quo's dreamy, hippy days in its cuter melody, but it also has its muscular moments. Something about the guitar has hints of Thin Lizzy about it too. "Forty-Five Hundred Times" sort of goes against the "antidote to prog" thing, however, by being nearly ten minutes long. It also has a wistful, acoustic beginning. It doesn't take long to get rocking, though. It also features keyboards and saxophone in its wall of sound too, an unusual thing for Quo. The saxophone, in particular, is pretty inaudible, though. The track has airs of The Rolling Stones' "Midnight Rambler" to it. It probably does go on a bit too long, and, in comparison to the others, does't seem to get anywhere, lacking in structure somewhat.

The bonus track, "Joanne", was the 'b' side to "Caroline" and has a definite sixties feel to it. Overall, half an hour or so of this album with aurally blow your cobwebs away.
Read more
One person found this helpful
Helpful
Comment Report abuse

Dave Duck
5.0 out of 5 stars Goes without saying,this is a great album
Reviewed in the United Kingdom on 13 September 2016
Verified Purchase
Probably their best. Not sure the sound on this is any different to the re-mastered version that came out a few years back
The second disc is all but a waste of time, apart from nice to have long forgotten b side,Joanne,and fairly rocking version of Don't Waste My Time from Reading in 1973,does anybody,apart from absolute completists, need 2 demos,a mono version and stereo edit of Caroline ?
The last track on this disc is a worse than bootleg live track from a Dublin gig in 1973
Read more
5 people found this helpful
Helpful
Comment Report abuse
See all reviews

Page 1 of 1 Start overPage 1 of 1
This shopping feature will continue to load items when the Enter key is pressed. In order to navigate out of this carousel please use your heading shortcut key to navigate to the next or previous heading.
Back
Next
Pages with related products. See and discover other items: status quo
Unlimited One-Day Delivery and more
Prime members enjoy fast & free shipping, unlimited streaming of movies and TV shows with Prime Video and many more exclusive benefits.
> Get Started