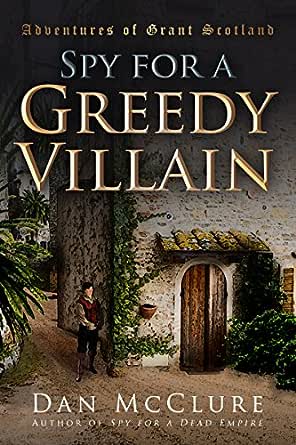 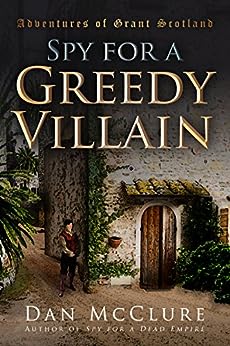 Writing stories infused with the smoky charisma of classic film noir mixed with the pulse-pounding excitement of adventure fantasy and the cagey class of suspenseful espionage, Dan McClure brought the best parts of all of our most cherished pulp together and added his own signature brand of wit. He currently lives, writes and works in and around beautiful and historic Arlington, Massachusetts.

ChrisG
4.0 out of 5 stars Not as good as the first three books
13 March 2019
Format: Kindle EditionVerified Purchase
Although I enjoyed the stories, the hero's alcohol problem in this one made it unlikely he would survive his adventures, and the whisky drinking stuff got very repetitive - in fact a couple of weeks after reading it, this is what I recall most about the book. Note to author, I know know the hero must go through a fall in his fortunes, but please pull him out of this one, as it's a little boring, and move the underlying story forward- surely the location of the magic books !
Read more
Helpful
Comment Report abuse
See all 1 customer reviews
Write a customer review

Edmund Gardner
4.0 out of 5 stars A Well-written, Enjoyable, and Exciting Addition to the Grant Scotland Series
5 August 2018 - Published on Amazon.com
Format: Kindle EditionVerified Purchase
In Spy for a Greedy Villain, Grant returns with his characteristic dry wit and self-deprecating humor that protect his compassionate and honorable heart from the sharp edges of life. Grant however is in a bit of a downward spiral. He's drinking more than ever and he's racked up a significant gambling debt (again). And while he has some new clues as to what happened to his father, he's not much farther along understanding his own place in the world. On top of that, he thinks his on-again/off-again, maybe, kind of, sort of girlfriend is sleeping with someone else. In short, he's in a bad place.

Lucky for Grant, he doesn't have much time to feel sorry for himself. Sam, the local constable and Grant's friend, recruits him for an investigation into the mysterious murder of the harbormaster. The murder of an official appointed by the crown has political and practical implications for all of Aelfa. If Grant and Sam don't handle the investigation discreetly and skillfully, many ordinary Aelfans could get hurt. The investigation leads Grant to uncover a plot that involves those in the highest levels of power and could tear Aelfa apart.

One of the stand out characters in this volume is Cole. We met Cole in volume 3, Spy for a Wayward Daughter, but he really comes into his own in this volume. In some ways, he's Grant's better self. He stands up for the oppressed and is loyal but not a fool. He keeps Grant honest and pushes Grant to make some decisions that just might lead to a slightly more meaningful life, as long as he doesn't screw it up. (I'm not holding my breath.)

There is something for everyone in this volume: humor, a murder mystery, political intrigue, magic, new spy gadgets, a complex but believable plot, non-cheesy romance, and bone crunching fight scenes. As usual, the plot is tight and the pacing is perfect. It evolves out of the real and practical problems of the characters but those problems make you care about the plots twists. It's a real page turner and when it's done you'll be left wanting more. At the end of the book, Grant is moving closer and closer to the center of the storm that is brewing over his world and I can't wait to see what happens next.

Josh
4.0 out of 5 stars Watchman for a Seedy Dock District
22 November 2016 - Published on Amazon.com
Format: Kindle EditionVerified Purchase
After much anticipation I have finished the latest Grant Scotland novel. It continued to be enjoyable, pulpy fantasy and there continues to be less actual spying than the titles of the novels would lead you to believe. (Plenty of brawling, a bit of skulking, and a heaping helping of creative lying, but minimal spying). Whereas book 3 was a bit of a departure, sending Grant away from his hometown and supporting cast for the course of that adventure, book 4 sees him back in Aelfa. We're reacquainted with several characters, slowly building up Grant's supporting cast. I'm glad Cole's been added to the main cast, as he's a welcome addition.

One problem with Grant's supporting cast is representation. There are a total of two female characters in the book (not counting serving maids/wives of secondary characters/etc.). One is damseled, and the other is Grant's recurring romantic interest. While Sylvyr is a bad-ass, she does often feel like she exists only to act as the sexy significant other. If we're going to continue to grow the cast in future books I would love to see more women added and in more meaningful ways.

While the conflict of this book was fun (a murder mystery mixed in with politics and black market dealings! An invisible man!) it did feel like a bit of a step back after the larger scale of conflict in the last book. It's clear Mr. McClure is bringing pieces into position to start really shaking things up in Aelfa, and I look forward to that happening, but it didn't make this book feel very high-stakes. Not that every conflict has to be the end of the world! It was still a fun read.

Once again I find myself looking forward to the next novel in the series. Grant's situation is getting more and more precarious (but he's also amassing an interesting collection of magical artifacts). Things will likely come to a head soon, and only time will tell how Grant's wit and fighting dirty will get him out of it next time.
Read more

BCB
5.0 out of 5 stars Another great read from McClure!
11 January 2018 - Published on Amazon.com
Format: Kindle EditionVerified Purchase
A great spy novel set in another world and brilliantly seasoned with that oh so dry Grant Scotland wit. Magnificent! Thanks Dan!
Read more
Go to Amazon.com to see all 3 reviews 4.4 out of 5 stars
click to open popover
Unlimited One-Day Delivery and more
Prime members enjoy fast & free shipping, unlimited streaming of movies and TV shows with Prime Video and many more exclusive benefits.
> Get Started