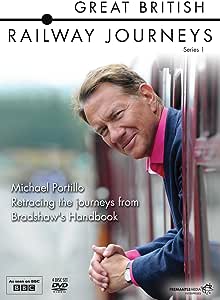 £14.22
& FREE Delivery on eligible orders. Details
Sold by: D & B ENTERTAINMENT
Have one to sell?
Sell on Amazon

Passionate about trains, Michael Portillo charts the great British romance with the railways as he retraces four journeys that were first documented in the monthly railway guide, Bradshaw's Handbook. He sees what's changed and discovers how our love of the railways all began. This 4 disc DVD set features 20 episodes covering the 4 different journeys: Liverpool to Scarborough, Preston to Kirkcaldy, Swindon to Penzance, Buxton to London. Portillo makes stops en route to visit some of Britain's most beautiful cities and hidden-away villages, meeting extraordinary people and hearing stories of how their lives have been shaped in some way by the railways. Throughout these monumental journeys, Portillo explores the secret ammunition factory at Gretna, sails the last steam boat on Lake Windermere, learns to talk 'scouse' in Liverpool, takes a dip in Bath Spa, cooks a traditional curry in Birmingham, tries his hand at oyster fishing in Cornwall and meets survivors of the Coventry Blitz.

4.5 out of 5 stars
4.5 out of 5
166 global ratings
How are ratings calculated?
To calculate the overall star rating and percentage breakdown by star, we don’t use a simple average. Instead, our system considers things like how recent a review is and if the reviewer bought the item on Amazon. It also analyses reviews to verify trustworthiness.
Top reviews

Mr. A. T. Jones
5.0 out of 5 stars Thanks for the Memory
Reviewed in the United Kingdom on 25 January 2012
Verified Purchase
This series has changed my opinion of Michael Portillo. He was rubbish as a Tory politician but has excelled as a presenter in this series. We have really enjoyed the series, which is presented in a very unstated manner and we think Michael has approached people in a very pleasant and friendly manner. OK there may still be a touch of politician meet and greet here and there, but nothing offensive (No babies were kissed in this series). The number of times he holds his hand up to his own political shortcomings in the later series shows that his presentation is probably quite genuine and very tongue in cheek. There are lots of interesting details revealed, we have learned quite a bit about our local history we did not know existed. No, give the guy the benefit of the doubt and enjoy the series for the great photography and sunny weather we do not seem to get very often. Perhaps Bradshaw was mentioned rather often at times, but you do tend to get wrapped up in the story and not notice the references over much. One reviewer complained about the "toffy" voice, though just about everything else as well, but Michael does speak in a very clear and precise manner, certainly not over the top posh. As a broad speaking northerner I found nothing offensive in his southern dialect, pretty middle of the road really. We have watched all of the third series on TV, we missed the first two hence buying the DVD, roll on the fourth, if there are any more railway lines to travel on.
Read more
8 people found this helpful
Helpful
Comment Report abuse

Malcolm
TOP 1000 REVIEWER
5.0 out of 5 stars Portillo's Railway Passions
Reviewed in the United Kingdom on 28 February 2012
Verified Purchase
Series 1 of Great British Railway Journeys is a wonderful trip along
some of the most scenic routes of Britain's current railway system
in a compare and contrast style using Bradshaw's Hand-Book originally
published in 1863, by George Bradshaw, the Victorian, cartographer
and Time Table enthusiast.

Presented by Michael Portillo, in a laid-back style, we visit the old
railway towns and cities of our nation and note the changes in landscape,
industry, and usage of railways from the 1860's of Bradshaw's era, when
at the height of the Victorian age, railways were king, bringing fresh
fruit and fish from farm orchards and sea ports to the masses in urban
areas.It saw also the start of seaside holidays, taking those same masses
of people on what would for many have been their first view of the sea.

In a set of four discs, we are taken from Liverpool to Scarborough,
Preston to Kirkcaldy, Swindon to Penzance and Buxton to London with
scores of stops along the way where Portillo explores and expounds
on the places he visits, sometimes a little too briefly.

The original broadcasts were of 30 minutes duration, an hour would have
been better, but the total running time of Series 1 is 600 minutes, so
there is a lot of enjoyable viewing.

The trains all appear to be very new, and uncrowded, suggesting that this
series was recorded during off peak travel hours.
All in all, a worth while purchase and a perfect tie-in with new facsimile
editions of Bradshaw's Hand-Book from Old House publishers, also available
on Amazon.
Read more
2 people found this helpful
Helpful
Comment Report abuse

M. C. PETER
4.0 out of 5 stars Amazing trip back in time
Reviewed in the United Kingdom on 11 February 2012
Verified Purchase
Apart from the lack of possibility of skipping the short but repetitive introduction to each element of this journey through Britain by rail, the rest is a well-planned mixture of reflections on some well-known and some less-known parts of Britain, all portrayed by interviews with local people. If you can handle the regional accents, all well and good, but this seems unavoidable in today's documentaries. Don't expect this series to show you detailed shots of railways, trains and locomotives. The series is about the people and places visited, not about the railways, which are just a framework for the thoroughly absorbing thoughts of Michael Portillo, who manages to avoid politicising his comments. A really enjoyable work, which makes me keen to acquire the second series which was recently announced. However, the price is far too high at the moment, so that will have to wait! Do get hold of the very reasonably-priced Bradshaw guide on which Portillo bases his journeys. This mid-Victorian guide is much more than a railway timetable and is a historical document in its own right.
Read more
3 people found this helpful
Helpful
Comment Report abuse

Zoe King
5.0 out of 5 stars Absolutely fascinating.
Reviewed in the United Kingdom on 24 January 2018
Verified Purchase
Fascinating. A history lesson in every episode, but presented with such aplomb, it never becomes boring. Michael Portillo has such natural charm that he is adept at persuading people to tell their stories and share their knowledge. I'm now working my way through series 2. Highly recommended, and not just for train buffs.
Read more
One person found this helpful
Helpful
Comment Report abuse

DEREK
5.0 out of 5 stars Great entertainment
Reviewed in the United Kingdom on 9 November 2011
Verified Purchase
When I first heard that the next programme on BBC2 was Michael Portillo presenting a programme about trains my immediate response was turn off the television.I don't particularly like Portillo or his brand of politics and I am not particularly interested in trains

How wrong I was, after forcing myself to watch 10 minutes of this series I was hooked. Portillo has obviously done his homework and researched his subject meticulously.Using Bradshaw as a framework to base the series is very clever, it adds authencity and depth to the programmes

Say what you like about Michael Portillo but he is an excellent host with an extremely dry sense of humour and a colourful sartorial style. He seems genuinely interested in the History of British Railways and of the people associated with them and shows great passion when discussing the subject

This is an extremely enjoyable series and is also highly informative

John Jones
5.0 out of 5 stars An entertaining DVD
Reviewed in the United Kingdom on 12 May 2020
Verified Purchase
As Michael travels around one feels as if you are there and takes you to palces you may not know about on route /at starting point or destination.
Read more
Helpful
Comment Report abuse

4 DVDs, circa 2.5 hours each is 10 whole hours of M. Portillo in 2010 for series 1. The whole experience, disregarding trains abroad is 85 or so hours. Whether in a pink jacket, purple or green, M. Portillo is always watchable, fully briefed and informed. Buy Bradshaw's tome and follow along.
Read more
Helpful
Comment Report abuse

Bobby
5.0 out of 5 stars Highly entertaining.
Reviewed in the United Kingdom on 8 February 2019
Verified Purchase
A great series well presented by Michael Portillo not only him visiting different places of interest but him getting involved in various roles when he visits factories. Highly entertaining.
Read more
Helpful
Comment Report abuse
See all reviews
Pages with related products. See and discover other items: great railway journeys
Unlimited One-Day Delivery and more
Prime members enjoy fast & free shipping, unlimited streaming of movies and TV shows with Prime Video and many more exclusive benefits.
> Get Started