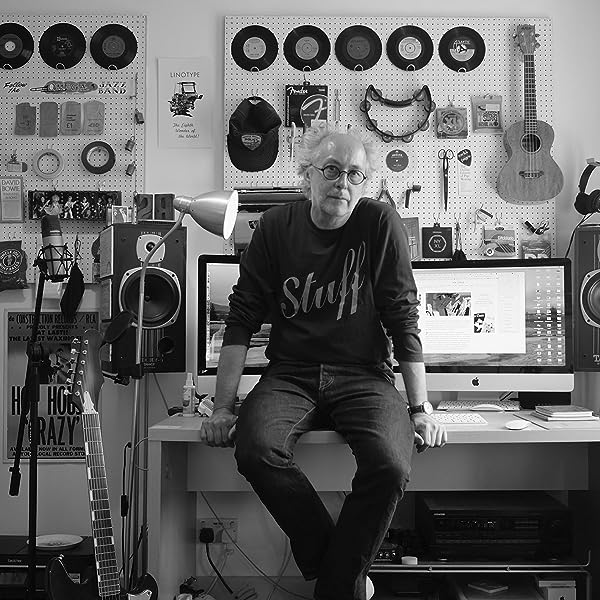 Fastest delivery: Tuesday, Aug 18 Details
Note: This item is eligible for click and collect. Details
Pick up your parcel at a time and place that suits you. How to order to an Amazon Pickup Location? Learn more
Read more Read less

Martin Colyer has been involved in music throughout his life. He is the son of Bill Colyer, the man who gave the name Skiffle to the burgeoning DIY movement that happened in Britain in the early Fifties. Bill’s brother was renowned Jazz trumpeter, Ken Colyer, leader of a band that included the huge influencers Alexis Korner and Lonnie Donegan (this story is brilliantly told in Billy Bragg’s recent book, “Roots, Radicals and Rockers”). Martin was in an R ’n’ B group called Hot House in the Eighties, and although ultimately unsuccessful, managed to spend £1.3m of RCA’s money. They were fronted by singer Heather Small and worked with Susan Rogers of Prince fame, Ron “Have Mercy” Kersey, writer of “Disco Inferno”, and toured supporting Barry White. Martin is also the co-founder, along with Mark Pringle and Barney Hoskyns, of the world’s number one music journalism resource rocksbackpages.com. In 2012 he won a Parliamentary Jazz Award for his work on Goin' Home: The Uncompromising Life & Music of Ken Colyer, a large-scale biography of his uncle. A magazine designer and art director by trade, Martin started writing a weekly blog, Five Things I Saw and Heard This Week, in 2012. It focused on music encountered in day-to-day life, and not tied into the way the music business runs (with release dates and hype). He has continued to write, mostly on design and illustration for the beautiful graphics magazine, eye, in London. He makes music at martincolyer.com and southwesternrecorders.com. He likes reverb, outré scents, Bob Dylan's boots and the writing of Joan Didion.

4.6 out of 5 stars
4.6 out of 5
3 customer ratings
How does Amazon calculate star ratings?
Amazon calculates a product’s star ratings based on a machine learned model instead of a raw data average. The model takes into account factors including the age of a rating, whether the ratings are from verified purchasers, and factors that establish reviewer trustworthiness.

Zuma
4.0 out of 5 stars Entertaining, inspiring and original.
Reviewed in the United Kingdom on 29 July 2018
Verified Purchase
What a delight this book is. Those of us who subscribe to the author’s blog will know what to expect – indeed the book is a transcription of approximately two year’s worth of blog entries from Feb 2012 to April 2014. Since it is tagged as ‘Volume 1’ we can assume that Colyer intends to transcribe further blog entries in future volumes. As I only started subscribing to the blog in the last couple of years, I am more than happy to see what I missed out on and to rue that I was so late to the party.
Colyer’s passion is for music and he writes with the insight of someone who has inhabited the world of the professional musician but also with the infectious enthusiasm of someone who is a fan like anyone of us. He also comes at the subject from an entirely personal, slightly sideways perspective, with no agenda and no product to sell. It’s entertaining and inspiring in equal measure. You’ll want to listen to or view the many tracks and video clips he mentions. Indeed, it could be considered a downside to reading this in book form rather than online that quickly clicking on a link is not an option. On the other hand, it’s great to have all the articles from this period gathered together in one place and, Colyer being an art designer by trade, the book itself is very pleasing to the eye
It’s a tad pricy, and would have benefitted from an index, but I’d still thoroughly recommend this book.

Caitlin
5.0 out of 5 stars Imagine
Reviewed in the United Kingdom on 18 September 2018
Verified Purchase
An enjoyment to read every day
Read more

Steve Carr
5.0 out of 5 stars An eclectic scrapbook of musical miscellany compiled by Martin Colyer
Reviewed in the United Kingdom on 10 August 2018
A terrific book, stuffed to the gills with snippets of news items and observations all with a musical theme, pulled together by the watchful eye of Martin Colyer, who also happens to run Rock’s Backpages, an online collection of music journalism, and whose blog “Five Things I Saw & Heard This Week” provides the material.
The book has been lovingly compiled, rammed with colour photos and interesting stories. Colyer has a good ear for a tune, an eye for the out-of-ordinary and he can write a bit too.
Will this be your kind of thing? Why not check out Colyer’s blog to find out at fivethingsseenandheard.com
If you are looking for an eclectic meander through music’s quirkier streets (and Bob Dylan) this book is for you.
Read more
Helpful
Comment Report abuse
See all reviews from the United Kingdom
Unlimited One-Day Delivery and more
Prime members enjoy fast & free shipping, unlimited streaming of movies and TV shows with Prime Video and many more exclusive benefits.
> Get Started