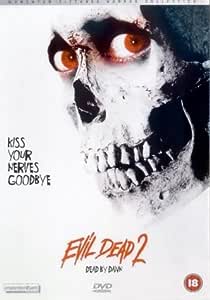 This stylised blood-soaked follow up to evil dead stars Bruce Campbell in a cult horror fest to chill your bones, whilst visiting a secluded broken-down cabin in the woods, teenagers Ash and his girlfriend Linda play their professor's tape of recitation of passages from the book of the dead. Evil supernatural powers are unleashed that turn Linda into a monstrous deadite and threatens Ash's life, when the professor's daughter and her friends arrive at the cabin, the night turns into a non-stop bloodbath with chainsaws, shotguns and flying eyeballs.

4.4 out of 5 stars
4.4 out of 5
827 customer ratings
How does Amazon calculate star ratings?
Amazon calculates a product’s star ratings based on a machine learned model instead of a raw data average. The model takes into account factors including the age of a rating, whether the ratings are from verified purchasers, and factors that establish reviewer trustworthiness.
Top Reviews

Spike Owen
4.0 out of 5 stars The Flaming Groovy!
Reviewed in the United Kingdom on 18 October 2015
Verified Purchase
Yes indeed, Sam Raimi and Bruce Campbell are back to shake some action with this remake of their own The Evil Dead (1981), only this time with more money and more overt humour. A quick prologue sets things up nicely, then BAM! Ash (Campbell) and his squeeze are in the cabin of doom and about to be part of a night of unholy demonic terror.

It's a nightmare of the black comedy kind, where Raimi and Campbell invite us to a party and then gleefully pummel us into submission - and we sado-masochistically enjoy it! Ash has grown a pair of cojones and decides to fight back against the demonic forces, cue mucho action with chainsaw and shotgun. There's a quip on the tongue for our hero as well, even as he is battered from pillar to post to make the action work.

Raimi isn't interested in extraneous scenes or exposition, he strips it bare as the pic hurtles along, all while he brings his technical skills with camera and sound design to the fore. The humour is often outrageous, dementedly so, while it's nice to find a group of film makers who don't feel the need to now throw blood and guts at the screen every other scene just to make a formulaic impact.

Amazon Customer
4.0 out of 5 stars The "groovy" Evil Dead 2 (Blu-ray)
Reviewed in the United Kingdom on 22 April 2013
Verified Purchase
Lets clear something up to begin with.. This is definitely a sequel to The Evil Dead (1981) and not a remake. There are many miss-conceptions about this. The initial opening 5-10 is in fact a recap. Due to copy right reasons Sam Raimi et al were unable to use footage from the original movie, so instead they remade elements of the original film which would be relevant to Evil Dead 2. However, due to the way the movie us edited, it does give an impression of a remake. Anyway..
I purchased this movie on Blue-Ray (after owning all three movies on VHS and DVD previously) and the first thing I noticed was that it is no longer classed as an 18 certificate. I was concerned that the Blue-Ray edition may been heavily edited. Rest assured, this is not the case. The film appears in all its gory glory ( I guess it isn't considered as nasty as it once was). While still being violent and bloody like the original, the action is more comical. But throw in the numerous one liners, and you're in for an enjoyable ride. Criticisms about the film itself; While I do love this movie, it does start to lose steam after about 45mins in. The middle is dragged out a bit, but its worth it once you get to the epic show down against the "The Witch" in cellar. As for the Blue-Ray and extras; I was hoping for more. The HD isn't really noticeable. There is no more picture clarity than you get on the DVD version and there are no additional extras to what you get on the DVD either. I was really hoping for at least some deleted scenes (I know there are many out there on the internet, go ahead, have a search), but alas, nothing. But to round up, it's still a top film. After all, it stars Bruce Campbell.

Throda tzen
TOP 1000 REVIEWERVINE VOICE
5.0 out of 5 stars I'm alright now..... I'm alright I tell you!......
Reviewed in the United Kingdom on 1 April 2012
Verified Purchase
But he isn't. Ash (Bruce campbell) has survived [sort of...] the first movie (Evil Dead)and virtually re-lives the entire first film all over again. New stuff this generally isn't, it's more a reworking of the old script. The opening shots do 'flesh out' things that were not explained in the first film and attempt to give a very rough summary of the first movie plot, but alters it quite a bit (but you don't need to see the first film to appreciate this one). We learn more about the Necronomicon, the 'Book of the Dead' and extra information on the 'evil', but otherwise it soon enters into the main story, which is basically the same.
The flaws in the movie are numerous, the script obvious, but that merely adds to the pulp schlock horror feel that means it doesn't exactly take itself seriously, and neither should you. And even calling it a horror seems wrong as I simply couldn't stop laughing -despite the gore, zombies, possessions etc. Much of this was down to the acting style and expressions on the actors faces, and one scene in particular has them all staring wide eyed as they follow the strange sounds moving around the building -it rivals a similar wide eyed scene with Humphrey Bogart in the African Queen for laughs.
This film builds on the slapstick humour of the first, but makes it much more humourous. I doubt many can watch this without raising a wry smile now and again, but be warned, it's not all fun and games. The violence and gore may be over the top, but it's also extreme and not to everyones taste. Some of the special effects may be badly executed from a modern' standpoint, but to me, it's all part of the 'feel' of the movie.
So lighten up and brace yourself for a horror film that may prove to be more laughs than you expect, whether they be intentionally included or not. This is definately one to watch if you don't mind the low budget style movies, and this has to be amongst the greatest of them, along with Army of Darkness, the final part of the trilogy.

S J Buck
4.0 out of 5 stars Better than the original?
Reviewed in the United Kingdom on 19 December 2013
Verified Purchase
I saw the original at the cinema in 1981 and thought it was one of the great horror movies. Having recently watched it again I was somewhat less impressed. So buying the 'sequel' wasn't exactly a priority. But I saw it cheap a few months ago and took the plunge. I watched it with some friends a few weeks ago and enjoyed it far more than the original.

As somebody else has commented here this isn't so much a sequel as a re-imaging of the original movie. It has a number of laugh out loud moments, which combined with better special effects and a wonderfully over-the-top performance from Bruce Campbell make it a real gem.

It retains many of the characteristics of the first movie as well. The roving camera point of view in the woods is still there and unsurprisingly quite a few scenes from the first movie are re-worked into this one. The ending is wonderful, and I've had to buy the 3rd one of the strength of this.

It is a real cult classic that I think will hold up to repeated viewings.

Gary Gough
5.0 out of 5 stars Funny horror show
Reviewed in Canada on 28 January 2016
Verified Purchase
Don't expect anything deep here. It's a funny horror movie, as such it does fine. In some ways it's a rehash of "Evil Dead" . Both have an early version of facebook as a plot element ( Facebook, Necronomicon, what difference? ) and loosely follow the same plot except the second is setting up for "Army of Darkness". If you like absurdist humour good odds you'll enjoy this.
Read more
One person found this helpful
Helpful
Sending feedback...
Thank you for your feedback.
Sorry, we failed to record your vote. Please try again
Report abuse

JD
5.0 out of 5 stars "Groovy"
Reviewed in Canada on 28 February 2013
Verified Purchase
If you're as big an "Evil Dead" fan as I am, You need to get your hands on the Evil Dead II: Dead By Dawn Book of the Dead Edition. The quality of the latex that the book is made from is just excellent and the detail on (and inside) the book is great too. This discontinued collector's gem is worth ever penny, bringing you a [more or less] replica of the Necronomicon Ex Mortis with its incredible skin-like texture and a few replica pages from the film's Book of the Dead. I highly recommend this for serious "Evil Dead" lovers, big Sam Raimi fans, movie collectors, Bruce Campbellites, and rehabilitated Candarian Demons.

Also, I don't recommend reading passages from the book aloud. I'm currently missing a hand, everybody around me is dead, and I'm in the process of being sucked into a portal. I hope this all stops soon, I've got a 9-5 in Sporting Goods tomorrow. Shop smart; shop S-Mart.
Read more
4 people found this helpful
Helpful
Sending feedback...
Thank you for your feedback.
Sorry, we failed to record your vote. Please try again
Report abuse

Tom T.
5.0 out of 5 stars Love this movie
Reviewed in Canada on 3 September 2019
Verified Purchase
The case is beautiful, it is also one of my favorite movies, It arrived early and in perfect shape
Read more
Helpful
Sending feedback...
Thank you for your feedback.
Sorry, we failed to record your vote. Please try again
Report abuse