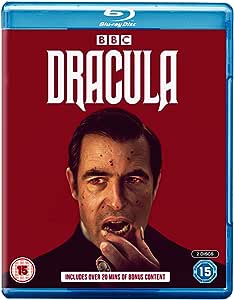 Rated: Suitable for 15 years and over Format: Blu-ray
3.2 out of 5 stars 108 ratings
Dispatched from and sold by Amazon.
Note: This item is eligible for click and collect. Details
Pick up your parcel at a time and place that suits you. How to order to an Amazon Pickup Location? Learn more

New BBC drama from the creators of Sherlock, including over 20 minutes of bonus content.

1897. English lawyer Jonathan Harker travels to Transylvania to meet a new client - and a legend is about to get fresh blood... From the snow-capped Carpathians to a death-haunted ship to the beating heart of London, the makers of ‘Sherlock’ bring you a brand new take on the most famous vampire of them all: the magnificent, brooding, deliciously deadly Count Dracula.

Starring Claes Bang and Dolly Wells.
Co-created and written by Mark Gatiss and Steven Moffat.
Based on the novel by Bram Stoker.

second-hand-songbird
VINE VOICE
5.0 out of 5 stars Absolutely Superb
5 January 2020
Format: DVD
I felt commanded to write this review after seeing the ones that have preceded me. I cannot believe what I have been hearing. No, this is not a retelling. It's an adaptation. There is a clear difference.
The first two episodes are packed full of period drama, clever writing, witty dialogue and absolutely brilliant characterisation. If all you care about is the original setting, you have a nearly movie-length first episode right there. The setting of the second - the mystifying Demeter ship - provides a great 'whodunnit' that provides the same intrigue and mystery whilst knowing all along exactly who 'did it'. The acting is superb and its place in the grand, overarching story is done subtly and without mistake.
And the third episode is a masterstroke of Mark Gatiss and Steven Moffat. Very Sherlockian with an intriciate nature, and creating a really interesting take on Dracula, albeit in the modern day. I really cannot stand to see this series bashed. It's one of the best things on TV in a while - It's masterful, and faithful, whilst having a complete spin of its own and staying respectful. Not to mention one of the best portrayals of our favourite vampire in decades.

Steppes
2.0 out of 5 stars Nosferatu Holmes.
3 January 2020
Format: Blu-ray
Watched all 3 episodes and am sorry to say that after a fantastically eerie 1st episode, the rest was a bit of a let down. Obviously there was a lot of padding and liberties taken with the classic novel. (Think Peter Jackson's Hobbit trilogy). An adaptation this is not.
The 1st episode started promisingly enough with Harker going to Castle Dracula to meet the Count. The whole episode was based inside the castle with Harker desperately trying to find out what the hell is going on, and the Count starting out as Gary Oldman with cod accent into the devilish Claes Bang (cool name and the best thing in this adaptation by far).
Sadly the 2nd episode was 90 minutes on the ship to the UK (in the book it's just boat ride with supernatural goings on) with passengers that aren't in the book being devoured by the Count, one by one. In the book it's a merchant ship with sailors. Here it's a passenger ship. Something out of an Agatha Christie whodunit. Characters from the book have also changed sex and race (Good ol' BBC). But there is a twist in the ending so hopefully the initial promise will be delivered in the final episode? Sadly not.
Considering the potential on offer the plot becomes convoluted with Dracula's past meeting up with the present and finishing off like a poor man's Romeo & Juliet. (Why the centuries old 'Count' would fall for a selfie obsessed Millennial teen called 'Lucy' is anyone's guess).
On a positive note, Claes Bang is 'bang' on the money playing the Count as a right vicious charming seductive bastard. There are plenty of nods to Hammer and the spectre of Christopher Lee looms large.
A perfect summary of Lee's Hammer Dracula films actually now that I think about it. Starts of as Prince of Darkness and after 4 1/2 hours ends as Dracula AD 72.

For those with patience and an eye for vision, I'd strongly recommend Werner Herzog's 'Nosferatu the Vampyre'. A remake of the very first film based on Bram Stoker's novel. E.M. Murnau's silent 'Nosferatu, A Symphony of Horror'.
I remember watching Herzog's version as a kid and being bored, you know why? Because nothing happens in it! But I persevered because I fancied Isabelle Adjani. 30 years later, now middle aged I rewatched it and was mesmerised by it all, (and realised I still fancy Isabelle Adjani). It's not a Hollywood film, so everything isn't sign posted. It's a mood piece, and after so many decades watching Dracula films, Herzog's version makes so much more sense.
In this version, Dracula is not a debonair Count, but like the book, the iconic Nosferatu. A man hopelessly trapped in eternal life yet unable to see the sun or love and be loved, reluctantly accepting his pitiful existence. When Harker arrives,
Dracula feels jealousy for him and is transfixed by Mina's picture. A woman who loves Harker and he her. He traps Harker in his castle and goes to search this woman. The ending is tragic, as Mina sacrifices her life for love of Harker, and Nosferatu knows he will die at sunrise, yet is unable to lose this precious moment with her, for him a moment of precious yearning.
This is all in the silent original as well, takes liberties with the book, yet feels more faithful to Stoker's version then this BBC monstrosity.

Amazon Customer
1.0 out of 5 stars Politically correct rubbish!
4 January 2020
Format: DVD
I was considering buying this dvd, however I'm glad I watched it on the BBC over the past three evenings. Once again, the BBC have gone politically correct mad! Just a ridiculous corruption of a brilliant story. I think Dracula would turn in his grave at this version.
Read more
51 people found this helpful
Helpful
Comment Report abuse

Mr. P. J. Pears
2.0 out of 5 stars From sublime heights to bottomless awfulness in three episodes
7 January 2020
Format: Blu-ray
The first episode of Dracula deserves its five star review from The Guardian. Its well acted, very well presented, its tense, its scary, its even a bit funny. It has action, drama, chills aplenty, its a superb introduction and scene setter. The actors are having a great time, they ham it up but it still holds its quality, its chills and remains (very broadly) loyal to the source material (okay, very broadly, veeerrry).

The second episode of Dracula is still good, its a little different, broadly a murder mystery on a boat. But the characters are interesting, the horror is still there and its even a little funny - every time Dracula makes a feeding pun I giggled, its surprising too - broadly in a good way.

The third and final episode of Dracula is surprising...in a bad way.

In a really, really bad way. Gone is the horror (broadly), gone is the story, gone is the lore, gone is our dark lord. It its place are a load of woke teenagers who are utterly unlikable, uninteresting and so forth - and yet for the 90min run time, we are mostly following them. What happened BBC? What happened to Dracula going on a rampage? Where was the breakout from jail, the stalking of London, the gathering of an elite band to counter him? The bats, the flies, the blood, the rampaging - oh such promise so completely lost.

Look the first two episodes are great, really fun - by all means watch them but the third episode is garbage nonsense. My wife turned to me and said 'wtf just happened' while I scratched my head.

Wy
2.0 out of 5 stars As seen on bbc1.
4 January 2020
Format: Blu-ray
Trust the bbc to ruin a good story. Episode 3.How could dracula survive in a box on the sea floor for 123 years without blood 2 feed on? Total BS. How can a vampire survive incineration? Again total BS.Leave classic stories alone bbc.Crap with them you are!
Read more
43 people found this helpful
Helpful
Comment Report abuse

A.R
1.0 out of 5 stars Very poor effort imho.
5 January 2020
Format: DVD
It started ok but as a whole it just completely missed the mark for me with all the protagonists once again being replaced by laughable BBC millennial politically correct substitution characters and it became way too gory. Episode three ruined the whole series and despite what some spin critics might try to make you believe you are far better off not watching it at all.
Read more
36 people found this helpful
Helpful
Comment Report abuse

phillip morris
1.0 out of 5 stars Tedious
3 January 2020
Format: Blu-ray
How can something be advertised on Amazon as a best seller, a month before the release date? Whilst some have been extremely complimentary about this version on Twitter, I thought it was tedious, boring and about three hours too long. The storyline was extremely poor on occasions and this was a missed opportunity for an updated version.
Read more
35 people found this helpful
Helpful
Comment Report abuse
There are 99 customer reviews and 108 customer ratings.
See all 99 customer reviews
Write a customer review
Unlimited One-Day Delivery and more
Prime members enjoy fast & free shipping, unlimited streaming of movies and TV shows with Prime Video and many more exclusive benefits.
> Get Started