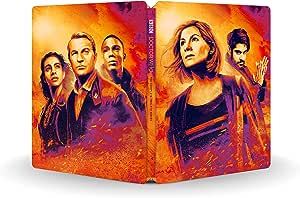 Jodie Whittaker (Actor) Rated: Suitable for 12 years and over Format: Blu-ray
4.3 out of 5 stars 445 ratings
Amazon's Choice recommends highly rated and well-priced products.
Amazon's Choice for "doctor who series 12 steelbook"
Promotion Message No-Rush Reward. 1 promotion
Note: This item is eligible for click and collect. Details
Pick up your parcel at a time and place that suits you. How to order to an Amazon Pickup Location? Learn more

Jodie Whittaker’s globally acclaimed Thirteenth Doctor returns for her sophomore series — a brand new set of action-packed epic adventures spanning space and time. Accompanied by her three best friends, Ryan, Yaz and Graham, the Thirteenth Doctor is set to face her toughest challenges yet. Featuring terrifying monsters old and new, figures from Earth’s history, and an eclectic set of guest stars, this series will delve deeper into the hearts of the Thirteenth Doctor. Cinematic visuals, compelling characters, and a host of alien threats all collide in new episodes shot through with Doctor Who’s trademark warmth, humour and heart. The return of Jodie Whittaker’s Doctor and friends is set to thrill, scare and delight audiences around the world.

4.3 out of 5 stars
4.3 out of 5
445 customer ratings
How does Amazon calculate star ratings?
Amazon calculates a product’s star ratings based on a machine learned model instead of a raw data average. The model takes into account factors including the age of a rating, whether the ratings are from verified purchasers, and factors that establish reviewer trustworthiness.

CyberGaia
5.0 out of 5 stars *Sigh*
Reviewed in the United Kingdom on 27 December 2019
Are you kidding me with these 1 Star reviews before the series is out... My goodness
Read more
175 people found this helpful
Helpful
Comment Report abuse

Ellis
1.0 out of 5 stars Doctor, I let you go.
Reviewed in the United Kingdom on 2 January 2020
After 15 years, whatever shred of interest I had left in this show has vanished after the Series 12 Premiere.

I don’t wish to jump on the bandwagon. But I’m going to have to.

This isn’t Doctor Who anymore.

The last 5 minutes of the episode sealed the deal for me with a below Panto-level acting from the main guest star.

I went in with zero expectations and with an open mind and I have come out with zero interest in continuing the show.

At this point the show could do anything. It could bring back Tennant, Rose, River, Donna, Captain Jack, Capaldi. Have a Time War 2.0. I just wouldn’t care.

I’m not happy, I’m not sad. I’m just indifferent. And by the looks of the ratings so are the general public.

I can only hope the show ends soon as the sooner it ends the sooner it can come back, refreshed, with the budget it deserves, and a creative team that has at least an ounce of originality or skill.

The last words of Capaldi were almost prophetic and so meaningful now.

Doctor, I let you go.

Stephen Boggon
5.0 out of 5 stars C'mon people
Reviewed in the United Kingdom on 27 December 2019
The series hasn't even started airing yet and there are already negative reviews. I don't even understand why Amazon is allowing for scores at this time.
Read more
127 people found this helpful
Helpful
Comment Report abuse

Deanos
1.0 out of 5 stars Absolutely Stupid and Embarrassing
Reviewed in the United Kingdom on 13 January 2020
Oh no, what has the BBC a.k.a the British Brainwashing Corporation done to Doctor Who? Ridiculous making Doctor Who female.

I actually know why the BBC made the Doctor female now, its to take all the incentive off the bad writing and terrible acting. Plus all the political BS and diversity rubbish that's forced on the viewer.

Its very cringey, I watched the first episode of season 12 to see how bad this show really is. Yeah its bad, worse then bad its complete Pants with tripe on top.

The BBC mess up everything nowadays.

1. Doctor Who is a woman and pc

2. Worzel Gummidge is now Dummy Dummidge who's pc and not funny.

3. Wildlife Nature programs are fixed and set up. You never see a kill in one take, especially a bloody kill from a pack of lions, its always edited. This is why I prefer watching Youtube.

4. Only Fools and Horses has been cut to shreds, because it no longer fits in this barmy society of today.

Avoid at all cost, better still boycott the BBC altogether until they get the right people in.

I've just barley watched episode 3 , which was a complete mess also. Oh dear me, the writing is a joke, and the acting is as bad again. Honestly folks this show wont get any better. You can judge a show from the first two episodes on any show, if the acting and writing is this bad early on, there's no way it will improve.

What the BBC must do.

• Bring back David Tennant as The Doctor.
• Bring back Billie Piper as Rose.
• Find better writers who have love for the show.
• Keep pc out of it

BBC will then have a winner on its hands.
Read more
102 people found this helpful
Helpful
Comment Report abuse

Amazon Customer
5.0 out of 5 stars Season 12
Reviewed in the United Kingdom on 18 December 2019
Amazon... PLEASE PLEASE I’m BEGGING you. Do not ruin this steel book. Season 11 is the worst looking dvd out of the steel book collection. Please , down the spine write the complete series 12. Not the word twelve...the number like all the others. Please don’t just add a promotional pic like you did with season 11...keep up the unique and fun art work that has been commissioned for all Previous steel books (aside from season 11). And please god...do not plaster the words “Doctor Who” across the front cover. Leave the cover for the art...write whatever you want down the spine. Please...continuity people !!!

Btw season 12 is absolutely fantastic so far. Fugitive of the Judoon and Praxeus have become instant classics in my book. Jodie seems so much more comfortable in her role this season. She has very much become her own doctor. The writing has improved dramatically and the visual effects are stunning! This season truly feels like Doctor Who. Last season was the worst season ever. I’ve been a fan for as long as I can remember but even I lost hope after watching season 11. I wasn’t even excited about the season finale. But this season I’m super excited for each and every episode. Hats off to the BBC. Loving all the plot twists and mega mega shocks, and the character development is out of this world this season. I don’t fully trust Yaz. I feel like she is a mole. I feel like her days in the tardis are numbered. Praxeus was a rare kind of episode. It was full of action
Read more
75 people found this helpful
Helpful
Comment Report abuse

Matt Searson
5.0 out of 5 stars Give Jodie a second chance
Reviewed in the United Kingdom on 18 December 2019
Have a good feeling about series 12. Definitely going to be a lot better than series 11. Especially with the two parter stories and returning monsters. Jodie will be comfortable as the Doctor this series. So if you didn’t like the last series, give series 12 ago. Jodie deserves a second chance. I am very hopeful.
Read more
73 people found this helpful
Helpful
Comment Report abuse
See all reviews from the United Kingdom
Unlimited One-Day Delivery and more
Prime members enjoy fast & free shipping, unlimited streaming of movies and TV shows with Prime Video and many more exclusive benefits.
> Get Started