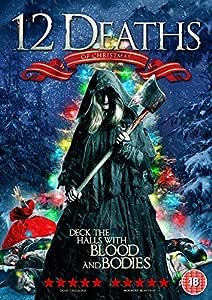 When children are found murdered just before Christmas 1992, the locals turn on a woman they believe to be the killer, and an angry mob hang her in the woods. Before she dies, she curses the town and vows to return to take her revenge. Twenty five years later, the story is just a local legend, but when more children start to go missing again, everyone fears the curse might be true, in this terrifying re-telling of the legend of the witch Frau Perchta.

2.8 out of 5 stars
2.8 out of 5
10 customer ratings
How does Amazon calculate star ratings?
Amazon calculates a product’s star ratings based on a machine learned model instead of a raw data average. The model takes into account factors including the age of a rating, whether the ratings are from verified purchasers, and factors that establish reviewer trustworthiness.
Top Reviews

Patsy
1.0 out of 5 stars Rubbish
Reviewed in the United Kingdom on 26 December 2017
Verified Purchase
Terrible awful stupid movie with an extremely thick main character who happens to be a district nurse! She is probably in her 40s playing a 25 year old. I wouldn't let her into my house to nurse my cat. There are too many spoilers to even go into detail. Please do not waste your time or money on this one. It's by the same people who did House by the Lake. I should have known better!
Read more
2 people found this helpful
Helpful
Comment Report abuse

Tony Reynolds
1.0 out of 5 stars All Just A Waste Of Time
Reviewed in the United Kingdom on 19 December 2017
Verified Purchase
Watched this last night and was very disappointed. I was looking forward to watching it due to one review I read, other reviews are more on point and you should read more than one review to get the full picture. Right from the beginning the acting is awful, so bad you just want everyone to die soon as possible so it will be all over quickly. The storyline is weak, the title 12 Deaths of Christmas refers to what, it's all just a waste of time. I love Horror, and thought the death scenes is this were not worth the energy or air time, I won't ever watch this again. If you are looking for a good Christmas Horror, this is definitely not it.
Read more
One person found this helpful
Helpful
Comment Report abuse

Linda
1.0 out of 5 stars Just - don't
Reviewed in the United Kingdom on 10 December 2017
Verified Purchase
I should have read more than the first two reviews. British films are usually very good even if not to my taste but this has to be one of the worst films I've ever seen. Ridiculous story line and abysmal acting with all unlikeable characters, and boring. PLEASE don't waste your money.
Read more
One person found this helpful
Helpful
Comment Report abuse

R. Harvey
1.0 out of 5 stars Cringeworthy awfullness
Reviewed in the United Kingdom on 21 November 2017
Verified Purchase
Lasted 20 minutes before we could no longer cope with the atrocious acting. Not only did I pay money to rent it, I lost 20 minutes of my life and I can't get either of those things back.
Read more
Helpful
Comment Report abuse

Louisa Warren
5.0 out of 5 stars Gory, fun with one hell of a twist
Reviewed in the United Kingdom on 30 August 2017
Brilliant film I saw at Horror Festival.

Can't wait for this one to come out. It is full of gore, fun and mystery.

For the 12 days before the Christmas of 1921, children went missing near the towns woods. One traumatized girl was found, but her mind had gone and she later died of horrific injuries which she had sustained.Just before the Christmas of 1992, a further five children disappeared again. They were found in the same woods, their throats slit. Angry and seeking vengeance, the locals hung and gut a woman they believed to be the killer. But before dying, she cursed the town and vowed to return and take her own revenge. 25 years later, the story has become little more than a local legend. But as kids start to go missing again, everyone starts to wonder if the tales of a curse might be true.

The deaths are incredibly creative featuring a teenage girl having Christmas lights put under her skin and strung up outside a house.
The witch is truly creepy, I would strongly recommend this for anyone looking for a great Christmas horror.

The Movie Guy
2.0 out of 5 stars It is time to face our demons.
Reviewed in the United Kingdom on 10 November 2017
Vanessa (Claire-Maria Fox) and her daughter Amy (Faye Goodwin) are going to spend Christmas at grandpa's (Tony Manders) because her husband likes younger women. There is a back story with a curse and missing children concerning an incident that happened a few decades ago. It involves folklore (urban legend in the film) concerning Frau Perchta (Tara MacGowran) aka Mother Krampus. It seems she comes around randomly to get children, but also can be summoned like Bloody Mary/Candyman because this wasn't that great of a script until we get to the twist or explanatory ending. And by then it was too late.

Certainly not the worst Krampus film out there. Clair-Marie Fox and Tara MacGowran should have swapped roles.