David Hosier MSc, educated at preparatory school, comprehensive school and the University of London (Goldsmith's College), holds a bachelor's (hons.) and master's degree in psychology, as well as a post graduate diploma in education (specializing in psychology).His undergraduate thesis was entitled 'The Effects of Childhood Depression on Academic Performance',and he was the only student in his year to gain a paid contract (with the University of Brussels)to produce his master's thesis. He has worked as a teacher, lecturer and researcher. He is also the founder of childhoodtraumarecovery.com,a site comprising articles related to childhood trauma, for which he exclusively writes. He himself suffered severe childhood trauma,which resulted in psychological damage leading to serious suicide attempts, several hospitalizations and electro-convulsive shock therapy.

His motivation to found his website and write his books stems from his early life experiences. As of January 2014 he has published four books relating to childhood trauma.

He currently lives in Brighton, UK. 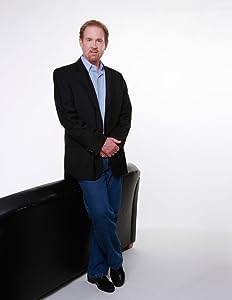 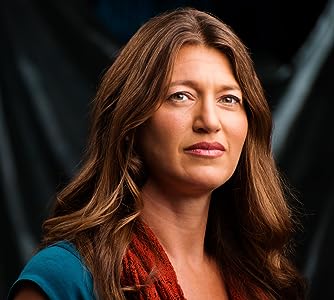 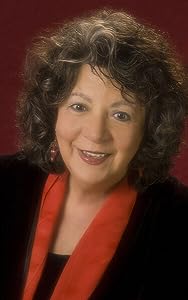 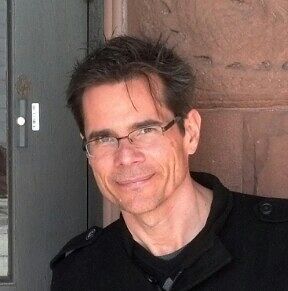 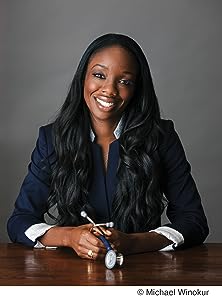 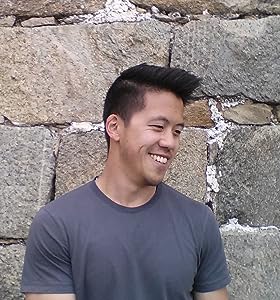 Help us improve our Author Pages by updating your bibliography and submitting a new or current image and biography.
Learn more at Author Central
1 11 1
Previous page
Next page
Books By David Hosier MSc
All Formats Kindle Books Sort by:Popularity 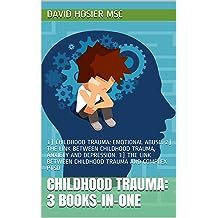 BOOK 2: THE LINK BETWEEN CHILDHOOD TRAUMA, ANXIETY AND DEPRESSION.

Each of the above three books contain concise and accessible articles. Each article is intended to 'stand-alone' so the book may be dipped in and out of or read straight through. All articles were originally posted on the popular blog childhoodtraumarecovery.com.

David Hosier was educated at the University of London and holds an MSc in psychology ; he has worked as a teacher, lecturer and researcher of the subject. He, himself, suffered severe childhood trauma which resulted in him having to be hospitalized several times as an adult and even in him undergoing electroconvulsive shock therapy. It is such experiences as these that motivated him to write his books with the aim of helping both himself and others recover from childhood trauma.

David Hosier is the author of several other books on childhood trauma and is the founder of, and sole writer for, the popular website childhoodtraumarecovery.com 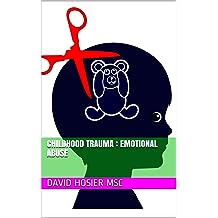 Childhood Trauma : Emotional Abuse 18-Dec-2014
by David Hosier MSc
( 8 )
£0.77
A comprehensive set of articles about the effects of emotional abuse in childhood on our adult lives, written in a concise and accessible style. The book comprises 'stand-alone' articles giving the reader the choice between dipping in and out of it or reading it straight through. Written by psychologist David Hosier MSc, who himself experienced severe childhood trauma and is the founder of childhoodtraumarecovery.com. CLICK ON EBOOK IMAGE TO VIEW CONTENTS.
Read more 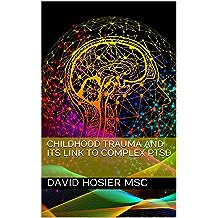 This book contains concise and accessible articles, originally posted on the widely read blog, childhoodtraumarecovery.com, about the link between childhood trauma and complex post traumatic stress disorder (cPTSD). Each article is intended to 'stand-alone' so the book my be dipped in and out of or read straight through.

David Hosier was educated at the University of London and holds an MSc in psychology ; he has worked as a teacher, lecturer and researcher of the subject. He, himself, suffered severe childhood trauma which resulted in him having to be hospitalized several times as an adult and even in him undergoing electro-convulsive shock therapy. It is such experiences as these that motivated him to write his books with the aim of helping both himself and others recover from childhood trauma.

David Hosier is the author of several other books on childhood trauma and is the founder of, and sole writer for, the popular website childhoodtraumarecovery.com

SEE CONTENTS BELOW :
Introduction
Prologue
1) Childhood Trauma And Complex Post-Traumatic Stress Disorder
2) Why Does Traumatic Experience Effect Some People More Than Others?
3) Why Can Effects Of Childhood Trauma Be Delayed?
4) Childhood Trauma And Memory : Why Some Remember, Others Forget
5) Childhood Trauma And PTSD : Facts And Fiction
6) PTSD : What Happens In The Brain?
7) Disturbing Memories : Why They Can Remain Unprocessed
8) PTSD, Childhood Trauma And Other Risk Factors
9) Ten Childhood Experiences That May Lead To PTSD
10) Ten Most Common Thoughts Of People With PTSD
11) Developmental Trauma Disorder
12) Effect of Early Trauma on Brain's Right Hemisphere Development
13) How Does PTSD Develop
14) Why We May Think Obsessively About Our Childhood Trauma
15) Constantly Feeling Fearful? Has Your Brain Been Wired For Fear Due To Childhood Trauma?
16) Wrongly Diagnosed With Borderline Personality Disorder (BPD)?
17) Is PTSD Sometimes Misdiagnosed As Attention Deficit / Hyperactivity Disorder (ADHD)?
18) Childhood Trauma And Body Memories
19) Constant Feelings of Threat/Paranoia And Their Link To Childhood Trauma
20) Childhood Trauma Leading To Traumatic Memories
21) Why We May Severely Over-react To Minor Stressors
22) Feelings Of Alienation And Disconnectedness Linked To Childhood Trauma
23) Adverse Effects Of Trauma On Memory
24) Childhood Trauma Leading To The Need To 'Self-Medicate'.
25) Depersonalization: How Trauma Can Leave Us Feeling 'Unreal.'
26) How Trauma Can Profoundly Alter Our World View
27) The Serious Harm Trauma Can Do To Our Nervous System
28) How PTSD Can Leave Us Feeling Unremittingly Exhausted
29) PTSD Symptoms : Effect on the PTSD Sufferer's Intimate Relationships
30) Is Your Anxiety Caused By Hyperventilation? A Look At The Science
31) Physical Brain Differences In Those Who Suffer Severe Anxiety
32) Possible Adverse Physical Effects of CPTSD
33) Traumatic Amnesia Resulting From Childhood Trauma
34) Why It's So Hard To Talk About Our Experience Of Severe Trauma
35a) Afraid Of Going To Sleep?
35b) Treatment for Trauma Related Nightmares
36) Feel Permanently, Emotionally Numb? The Possible Roots In Childhood Trauma.
37) Possible Life-Long Effects Of Toxic Stress On The Child
38) Do You Feel Constantly Frightened and Under Threat?
39) PTSD - 3 Steps to Mastering its Effects.
Read more 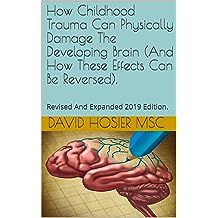 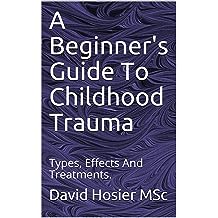 A Beginner's Guide To Childhood Trauma: Types, Effects And Treatments. 16-Jun-2019
by David Hosier MSc
( 2 )
£0.00
Part One - The Introduction, describes, and elaborates upon, the main elements of the seminal Adverse Childhood Experiences Study and elucidates the main ways in which children may experience interpersonal and complex trauma.
Possible negative effects of childhood trauma will be considered in Part Two ; whilst most will be assigned their own chapter, some closely related effects will be amalgamated into individual chapters that consider two or more of them together.
Part Three will outline the main therapies that are currently used to treat the adverse effects of childhood trauma.
CONTENTS :

28) Dialectical Behavior Therapy (DBT).
29) Eye Movement Desensitization And Reprocessing (EMDR) :
30) Cognitive Behavioral Therapy (CBT).
31) Somatic Experiencing Therapy.
32) Self-Hypnosis.
33) Mindfulness Meditation.
34) Neurofeedback.
35) Yoga.
ABOUT THE AUTHOR :
David Hosier BSc Hons; MSc; PGDE(FAHE) was educated at Goldsmiths College, University of London and holds two degrees in psychology as well as a diploma in education. He is the founder of childhoodtraumarecovery.com for which he has written over 700 articles over a period of six years. This book, in response to many readers’ requests, represents the culmination of this work by bringing together many of the most important of these articles to provide an overview of the topic of childhood trauma.
His academic interest in childhood trauma and its effects began in 1993 when he wrote his final year university thesis on the effects of childhood depression on academic performance. 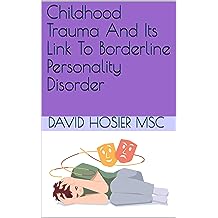 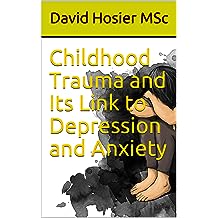 Childhood Trauma and Its Link to Depression and Anxiety 03-May-2014
by David Hosier MSc
( 2 )
£0.77
The link between childhood trauma and the subsequent development depression, anxiety and other psychiatric conditions is beyond dispute. In this eBook, psychologist David Hosier MSc, who himself suffered severe childhood trauma, and, subsequently, depression and anxiety leading to hospitalizations, electroconvulsive shock treatment and near death by suicide, examines this link through a series of comprehensive, yet easily digestible, articles. David Hosier has had many years experience as a teacher, lecturer and researcher ; he was educated at the University of London, Goldsmith's College and currently lives in Brighton, UK. 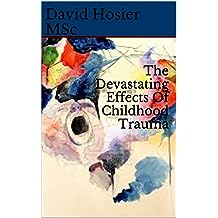 The Devastating Effects Of Childhood Trauma 26-Nov-2013
by David Hosier MSc
( 4 )
£3.66
Re-edited November 2014. This book is an accessible and thorough account of the myriad potential devastating effects of childhood trauma, including anxiety, depression, low self-esteem, anger, addictions, self-harm, relationship difficulties, obsessive love disorder, sexual hyperactivity, dissociation (detaching from reality), intermittent explosive disorder, personality disorders (particularly borderline personality disorder), attempted suicide / suicide, and many other problems.
It is written as a series of easily digestible articles and can be read right through or dipped in and out of.
The author, David Hosier MSc, was educated at the University of London in the UK and has worked as both a teacher and researcher of psychology. As well as holding two degrees in the subject, he also holds a Post Graduate Diploma in Education. He himself suffered severe childhood trauma and its, in his case, near fatal effects (he spent 5 days in intensive care in a coma on life support following a serious suicide attempt - this was preceded by years of incapacitating depression and anxiety).
It is from these experiences that he drew his motivation to write this book.
Read more