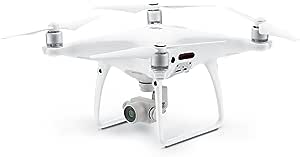 To learn more about safely and responsibly flying your drone in the UK, visit our Fly Responsibly page here.
See More

Boasting a better camera, advanced obstacle avoidance, extended battery life, and additional intelligent flight modes, the DJI Phantom 4 Pro is an update to the Phantom 4 Quadcopter Drone. Its titanium alloy and magnesium alloy construction increases the rigidity and reduces the weight of the frame, and its 1-inch 20-megapixel sensor is able to shoot 4K/60fps video and Burst Mode stills at 14fps.

Similar products rated highly on "Easy to use"

Page 1 of 1 Start overPage 1 of 1
This shopping feature will continue to load items when the Enter key is pressed. In order to navigate out of this carousel please use your heading shortcut key to navigate to the next or previous heading.
Back
Next
Customer Questions & Answers
See questions and answers

4.1 out of 5 stars
4.1 out of 5
33 customer ratings
How does Amazon calculate star ratings?
Amazon calculates a product’s star ratings based on a machine learned model instead of a raw data average. The model takes into account factors including the age of a rating, whether the ratings are from verified purchasers, and factors that establish reviewer trustworthiness.

Photo Bob
5.0 out of 5 stars VERY Easy to Fly, Very good photos, Video is Oh My... Drop dead georgous, and yeah - I like it very very much, as a photographer
Reviewed in the United Kingdom on 4 May 2017
Style Name: Basic versionColour Name: WhiteVerified Purchase
This thing is great - going to give a full review within a few days, but (for me first drone) this thing is easy to fly, and being a photographer anyway, the quality of the image/video was essential - saving the £400 for the cheaper (none-pro) Phantom 4 is NOT worth the saving, unless you are happy with smart phone quality images, the Pro version (this one) I'd equate the image quality, roughly, to that of a Nikon D3200 - and as for the video quality - WOW - I have never owned a product that can shoot 4K @ 60FPS and look THAT good.

If you intend on doing any low light work (indoors, just pre sunrise/post sunset or night flying, the, this version, the Phantom 4 Pro is essential. I'm going to take a wild guess here, and say, at least to You and I, the regular Phantom 4 (appx £1000) - you're paying no more than £100 for the camera bit, at the MOST, and for the Phantom 4 Pro, I'd guess, you're paying most of that £440, towards the better camera. Again, I am guessing, but if you're buying a flying camera, you may as well pay 40% more cost, for 400% more camera. That's all my personal guesstimated opinion, but why strap a 50 pence plastic case to a £700 smart phone?

Phil
5.0 out of 5 stars It may be expensive but it is really very good.
Reviewed in the United Kingdom on 18 August 2017
Style Name: Basic versionColour Name: WhiteVerified Purchase
Really easy to fly with a good blend of automation and manual control depending on what you want at the time. Very accurate hover function and on the first flight I managed to manually get it to land on a small box in gusty wind. Surprisingly wind resistant, maybe because of the weight as it is fairly heavy once the battery is in.
Superb quality images and gives the ability to take aerial shots and perspectives that would have been impossible without repeated huge outlays of money (not that this isn't a huge outlay in itself of course but it is a one off outlay).
The only negative is the lack of a zoom on the camera but that is presumably just a cost issue - I believe that you can get all sorts of camera additions, including thermal imaging, if you want them.
All in, the choice was between this and the Mavic Pro and this won, at least in part because it is more of a pro unit. No regrets so far. And superb photographs and films already.

Steve
5.0 out of 5 stars Just great
Reviewed in the United Kingdom on 15 June 2017
Style Name: Plus versionColour Name: WhiteVerified Purchase
Bought this over the std P4P, don't regret it at all, the built in screen is excellent
Read more
9 people found this helpful
Helpful
Comment Report abuse

YellowTone
3.0 out of 5 stars A lot of fun while I had it but kept asking for a Chinese telephone number to register!
Reviewed in the United Kingdom on 13 June 2020
Style Name: Plus versionColour Name: WhiteVerified Purchase
The best affordable drone at the time but the software kept asking for a mainland China telephone number to register the unit.

Picture quality is nothing like a DSLR obviously but flight control is excellent though that battery life is punishingly short - you WILL need a spare and they're expensive.
Read more
Helpful
Comment Report abuse

FrankO
3.0 out of 5 stars Marvellous piece of photographic kit, let down by lousy camera control software/firmware
Reviewed in the United Kingdom on 26 May 2017
Style Name: Plus versionColour Name: White
This is a brilliant machine. The Amazon listing ('Pro + camera) is ambiguous: this is the phantom 4 pro PLUS drone, i.e. the Phantom 4 PRO with the built-in screen and app. All the Phantom 4s are flying cameras. It's worth buying this version, rather than the Phantom 4 Pro, if you have a smartphone or tablet that's slow or difficult to see in daylight. The built-in screen on the remote controller is highly visible even in bright sunlight.

Other reviews of the Phantom 4 Pro and Pro+ on this site have dealt with most aspects of the drone. It flies incredibly stably and its autopilot flight modes make controlling the camera for optimum aerial movies a breeze. The image quality is first-rate. Like another reviewer said; you need to spend a few hours familiarizing yourself with the machine from the many tutorials on the web.

I do have a couple of criticisms. Considering the Phantom 4 is primarily a flying camera, the DJI instructions are extremely light on how to set up the camera functions. For example, I spent a long time on the web ahead of purchase discovering if the P4Pro can shoot RAW files (it can!), and another long time discovering how to set up the file quality. I now know that the user can set up pretty much any function you'd expect of a decent DSLR, but the settings to do so are not exactly intuitive to find. The sequence of operations in the instructions is not the one that I (as a newbie to drone photography) would expect: more advanced features are peppered among the basic stuff, and taking photos — the entire point of the drone! — is covered minimally and very late on.

The biggest annoyance, for me, is that you virtually always have to have the drone switched on as well as the remote control to change any settings. The two devices seem to function as an intimate partnership, which is a shame as it means the aircraft has to be on with its fan whining, and its battery wearing, even when you're using the built-in flight simulator! I discovered early on that, if you switch on the remote controller alone and try to alter some settings, you receive error messages that make absolutely no sense at all.

So, top marks to DJI for equipment that brings superb aerial photography within the grasp of an amateur, but please will you think harder in future firmware updates about allowing users to do more with the remote control alone? (Particularly give us a simulator that works without the aircraft switched on.)

Edited to update.
I've knocked my review down to three stars. With experience of use, I'm losing my favourable opinion of this drone. As a flying camera, it's proving to be a nightmare. Sure, the drone offers wonderful automatic flying modes, but it reverts the most important camera settings you've input when you change flying mode!! I had my machine set to RAW+JPEG and AV mode at f8 for still photography, but the minute I use, for example, point of interest or active track flying, it reverts to auto with JPEG only. Similarly, with video set to HD at 60 fps, any move away from manual flying control to an automated setting reverts my movie choice to 4K at 30 fps, which I don't want and can't handle with my editing software. DJI, you need to pay urgent attention to this situation: either you're selling a device for aerial photography, or a flying machine for boy racers. If you want to keep the photography market, for heaven's sake get to work on the camera settings firmware and software so the P4P+ works like a normal camera and retains its settings unless they're actively changed!
Read more
85 people found this helpful
Helpful
Comment Report abuse

Anthony Bowkett
5.0 out of 5 stars Best fun it ages
Reviewed in the United Kingdom on 23 July 2018
Style Name: Plus versionColour Name: WhiteVerified Purchase
Love this drone so much fun, picture quality out of this world.
Read more
Helpful
Comment Report abuse

Amazon Customer
5.0 out of 5 stars Absolutely awesome.
Reviewed in the United Kingdom on 25 September 2018
Style Name: Basic versionColour Name: BlackVerified Purchase
Right out of the box, this is the best piece of kit I have ever used. Period.
Read more
One person found this helpful
Helpful
Comment Report abuse

Joe D.
5.0 out of 5 stars I finally got the drone up for a first flight today and was not disappointed. This thing is sensitive to control
Reviewed in the United Kingdom on 16 January 2017
Style Name: Plus versionColour Name: WhiteVerified Purchase
I did a lot of research before deciding to spend the extra money and buying the Phantom 4 Pro+. For me the integrated screen was worth the extra money as well as the rearward facing cameras for obstacle avoidance; not to mention the 1" sensor that the lower end Phantoms do not have.

It has been awful weather since the drone arrived so I have had plenty of time to familiarise myself with the controls and manual. I would advise any new drone pilot to do the same. This is a very complex and professional piece of kit.

I finally got the drone up for a first flight today and was not disappointed. This thing is sensitive to control, immensely stable and just superb. The first pictures are amazing in quality although I was concentrating on the piloting rather than the photography for the test flight!

I have done all the firmware upgrades with none of the issues experienced by the YouTube reviewers who all seem to make a meal of it. I am really looking forward to exploring the intelligent flight modes.