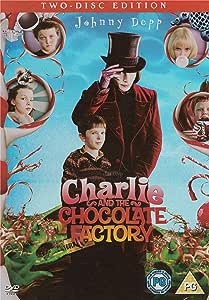 Family adventure based on the novel by Roald Dahl. The film centres around an eccentric chocolatier, Willy Wonka (Johnny Depp), and Charlie Bucket (Freddie Highmore), a good-hearted boy from a poor family who lives in the shadow of Wonka's extraordinary factory. Most nights in the Bucket home, dinner is a watered-down bowl of cabbage soup, which young Charlie gladly shares with his mother (Helena Bonham Carter) and father (Noah Taylor) and both pairs of grandparents. They all live in a tiny, tumbledown, drafty old house but it is filled with love. Every night, the last thing Charlie sees from his window is the great factory, and he drifts off to sleep dreaming about what might be inside. For nearly fifteen years, no one has seen a single worker going in or coming out of the factory, or caught a glimpse of Willy Wonka himself, yet, mysteriously, great quantities of chocolate are still being made and shipped to shops all over the world. One day Willy Wonka makes a momentous announcement. He will open his famous factory and reveal 'all of its secrets and magic' to five lucky children who find golden tickets hidden inside five randomly selected Wonka chocolate bars. When Charlie finds some money on the snowy street and takes it to the nearest store for a Wonka Whipple-Scrumptious Fudgemallow Delight he finds a golden ticket. The family decides that Grandpa Joe (David Kelly) should be the one to accompany Charlie on this once-in-a-lifetime adventure. Once inside, Charlie is dazzled by one amazing sight after another.

Director Tim Burtons take on Roald Dahls classic story is undeniably more faithful to the source material than the 1975 musical retelling of the same story. His Charlie & The Chocolate Factory is also a slightly darker, visually inventive film, and is ultimately a tasty treat that the whole family can enjoy.

Filling the coat of Willy Wonka is frequent Burton collaborator Johnny Depp--the pair have previously worked together on the likes of Edward Scissorhands, Ed Wood and Sleepy Hollow--and what fun he clearly had. His Wonka is a kooky, isolated figure, extremely distrusting and clearly uncomfortable around the children who win a golden ticket to look round his factory. Burton invests time in his main character, giving him a rounded back story that pays dividends, and while some will inevitably prefer Gene Wilders edgier take on the same role all those years ago, Depp nonetheless is on strong form. The cast around him also perform well, particularly Freddie Highmore in the title role.

The story is as youll likely remember it, with five children given the chance to visit Willy Wonkas mysterious chocolate factory. And what a visual treat that factory is, bursting with colour and vibrancy. Along the way, they encounter chocolate lakes, industrious squirrels and the infamous oompa loompas, and truthfully, its fun to be along for the ride.

Is it better than that aforementioned 1975 version? Actually, its just different. Each film will no doubt have its legion of fans, but the bottom line here is that Roald Dahls classic has provided the source for an enjoyable, well pitched movie with plenty of rewatch value. Now if only theyd go and film Charlie & The Great Glass Elevator--Simon Brew

Page 1 of 1 Start overPage 1 of 1
This shopping feature will continue to load items when the Enter key is pressed. In order to navigate out of this carousel please use your heading shortcut key to navigate to the next or previous heading.
Back
Next
Pages with related products. See and discover other items: johnny depp films
Unlimited One-Day Delivery and more
Prime members enjoy fast & free shipping, unlimited streaming of movies and TV shows with Prime Video and many more exclusive benefits.
> Get Started