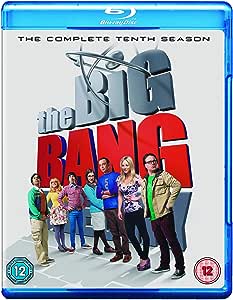 Leonard and Sheldon are brilliant physicists - geniuses in the laboratory, but socially challenged everywhere else. Enter beautiful, street-smart neighbor, Penny, who aims to teach them a thing or two about life. Despite their on-again, off-again relationship in the past, Leonard and Penny have finally gotten married. Even Sheldon has found a female companion, entering into a "Relationship Agreement" with neurobiologist Amy Farrah Fowler. In their free time, Leonard and Sheldon enjoy fantasy role-playing games with their ever-expanding universe of friends, including fellow scientists Raj, Howard and Howard's adorable microbiologist wife, Bernadette, who recently learned that they will soon be parents.

4.8 out of 5 stars
4.8 out of 5
345 customer ratings
How does Amazon calculate star ratings?
Amazon calculates a product’s star ratings based on a machine learned model instead of a raw data average. The model takes into account factors including the age of a rating, whether the ratings are from verified purchasers, and factors that establish reviewer trustworthiness.

This is not a jumping on point, so new viewers should start with season one.

This season begins with Leonard and Penny's second take on their wedding, which was set up at the end of the last year. We meet a few family we haven't seen before.

Then over the course of the year, things develop for the main characters once again. The guys - except Raj - work on a project for the government. Sheldon and Amy trial living together. And baby Wolowitz arrives. Their lives all continue to change...

As with season nine, this is a very strong season. Because we have so much invested in these characters by now, the moments of emotion and character development really do work very well and get a reaction from you. And the writers and cast are skilled enough to be effortlessly funny.

Added to which, a lot of the episodes do go for a little longer than seventeen minutes. In addition to the new family members, we do get some guest characters not seen in a while.

The Amy Sheldon relationship really is a highlight of the season, as the two do work so very well indeed as a couple. And the birth of baby Wolowitz does allow them to find a bit more for Stuart to do as helps out. Bert the geologist, only seen once before, becomes a semi regular, and works well in that respect.

But Raj is still a bit stuck as a character. The second half of the season does try to start developing him, so hopefully they will go as far as needs be with this. It's a season with no Wil Wheaton appearance at all. And only one brief Kripke scene. But at least we get to see Raj's dog again. And a few staples of the show, such as the guys in the lunch room and all the characters eating together, a little more than last season.

But whilst it is a five star season because of the above good points, you do feel a little in the episodes that don't have character development, that it's starting to mark time a little. So hopefully the impending twelfth season will be the last. Because as good as this is, you do start to feel that it really should look towards a good resolution. Even the best things can only go on for so long.

The dvd has the following language and subtitle options:

Disc one has forty minutes of the 2016 comic con panel for the show. Only cast member present is moderator Melissa Rauch, all the rest of the panel being writers or from the rest of the production staff. But as ever, this is an informative and fun watch.

Disc two: JustaskBBT: Five minutes of the cast answering questions. Fun but a bit brief.
Madprops: seven minutes of clips and people singing the praises of the props guy. Interesting but you'd like to see him at work.

Disc three: The ever expanding universe of the big bang theory. Nine minute feature about family member characters. A fun and interesting watch.
Who's the baby now? Seven minutes about baby Wolowitz. Also fun viewing.
Gag reel: seven minutes of people forgetting lines, messing up their words, or being interrupted. Big Bang theory gag reels do tend to be some of the best out there, and this is no exception. Some high quality and amusing outtakes.

KATHA5TROPH3
3.0 out of 5 stars Season 10
Reviewed in the United Kingdom on 8 May 2017
Verified Purchase
Season 10 for me isn't the best season, although everyone is now moving on with their own lives a bit more and becoming more 'grown up', I still enjoy watching this season. It's nice to see how everyone is managing with different aspects of their lives, either it being a new relationship or a new member of the group (aww).

I watch these not because I need to see every episode, but because I enjoy watching them. I am not hooked on this season like I was with 1-8.

I hope they do not drag out as many season as they can because this is actually a really good TV show!
Read more
4 people found this helpful
Helpful
Comment Report abuse

Fabio Firetti
5.0 out of 5 stars Double-digit funny
Reviewed in the United Kingdom on 12 November 2017
Verified Purchase
Double-digit seasons and nothing seems like the series's tiring, the story is starting annoying. Creators and authors are fantastic, actors the same in keeping series extremely funny. Of course it could not endless continues as the beginning, but characters are developing and changing. But this is done greatly, and (for me) in the right way.

jcmacc
VINE VOICE
4.0 out of 5 stars Quality 10th season of the BBT
Reviewed in the United Kingdom on 10 June 2018
Verified Purchase
Another 24 episodes of the Big Bang Theory spread across 3 Blu-rays discs. A decent range of behind the scenes bonus features are shared across each disc. If you aren't much of a fan of the BBT, your patience will have been broken by now as this is the tenth season and it's a bit late to start here for newbies - but for fans, the quality of show remains really high.
Read more
Helpful
Comment Report abuse

suzanne k cruickshank
5.0 out of 5 stars Amazing series.
Reviewed in the United Kingdom on 4 April 2020
Verified Purchase
Amazing series, you get to know the actors and learn something along the way while watching it, entertaining and so funny.
Read more
Helpful
Comment Report abuse

RJ
5.0 out of 5 stars Still excellent
Reviewed in the United Kingdom on 26 November 2017
Verified Purchase
You would have expected the story line and humorous situations to have dried up by now but not so. This series definitely lives up to the previous standard. Good job by all concerned!
Read more
One person found this helpful
Helpful
Comment Report abuse

Amazon Customer
5.0 out of 5 stars Fantastic brilliant and great.
Reviewed in the United Kingdom on 11 February 2020
Verified Purchase
Brilliant boxset, service and postage. Thank you very much...
Read more
Helpful
Comment Report abuse
See all reviews from the United Kingdom