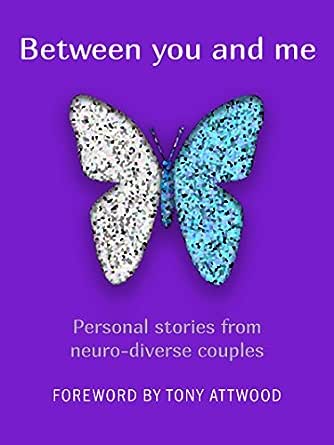 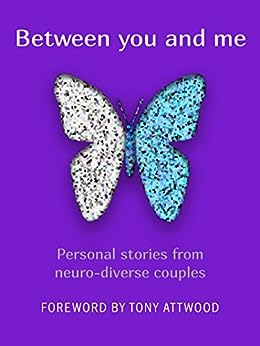 Between you and me: Personal stories from neuro-diverse couples Kindle Edition

Page 1 of 1 Start overPage 1 of 1
This shopping feature will continue to load items when the Enter key is pressed. In order to navigate out of this carousel please use your heading shortcut key to navigate to the next or previous heading.
Back
Next
Amazon Business : For business-exclusive pricing, quantity discounts and downloadable VAT invoices. Create a free account
Also check our best rated Pregnancy Book reviews

4.3 out of 5 stars
4.3 out of 5
13 customer ratings
How does Amazon calculate star ratings?
Amazon calculates a product’s star ratings based on a machine learned model instead of a raw data average. The model takes into account factors including the age of a rating, whether the ratings are from verified purchasers, and factors that establish reviewer trustworthiness.
Top Reviews

Vulpes
5.0 out of 5 stars Revolutionary help for ASD/NT couples.
Reviewed in the United Kingdom on 1 May 2018
Verified Purchase
This is a revolutionary book, written from the viewpoints of couples in a Neurotypical /Autistic Spectrum Disorder relationship. It’s not theoretical although there’s masses of advice they found to work; it assigns no blame; it’s constructive, intelligent, loving and shows how hard it is on both sides to understand each other. It lifts the veil for each side. It works for both partners. Attwood provides some further thoughts at the end of each set. Every couple in one of these partnerships should have a copy; every marriage guidance counsellor also. I completely recommend.
Read more
7 people found this helpful
Helpful
Comment Report abuse

Jo Cameron Duguid
5.0 out of 5 stars Indispensable for neuro-diverse couples
Reviewed in the United Kingdom on 15 October 2018
Verified Purchase
The 12 couples who contributed to this book write with breathtaking honesty and clarity. I can't thank them enough for their willingness to expose their relationships in this way for the benefit of others. Reading the book was an emotional rollercoaster ride - I laughed out loud and shed tears as I recognised so many similarities with my own marriage. There is no attempt to mask the reality of life with an Aspie partner, but it's important to stand in the truth and not expect too much. The neuro-typical will have to do most of the compromising, and ultimately has to decide if the AS partner's admirable qualities of loyalty, honesty and dependability are enough to compensate for what will always be lacking in other areas. Highly recommended reading.
Read more
3 people found this helpful
Helpful
Comment Report abuse

Pinkmat
5.0 out of 5 stars Helpful book
Reviewed in the United Kingdom on 22 July 2018
Verified Purchase
This is an excellent book and should be helpful for those in an NT/AS relationship. Besides the personal stories there are helpful comments by Tony Atwood. There is very little help for adults with Aspergers and most of us in such a relationship find that we have to resort to books as a resource. Tony Atwood's Guide to Aspergers was a life saver for me and now this book will also help others.
Read more
2 people found this helpful
Helpful
Comment Report abuse

Swimmer
5.0 out of 5 stars A must-read for those in a NT/AS relationship.
Reviewed in the United Kingdom on 1 July 2018
Verified Purchase
A must have for those in a relationship with someone on the autistic spectrum, or Asperger. Also invaluable for someone who is a counsellor supporting neurodiverse couples. An insight from both sides of the relationship with the added insight from Tony Attwood, expert in all connected to Autistic Spectrum Conditions.
Read more
2 people found this helpful
Helpful
Comment Report abuse

Mary Pearson
5.0 out of 5 stars An excellent book
Reviewed in the United Kingdom on 21 October 2019
Verified Purchase
A very balanced and useful book written from both the neurotypical and autistic points of view. This makes it particularly valuable for helping couples understand each other's point of view. A very acceptable book for Aspergers and NT partners.
Read more
Helpful
Comment Report abuse

V. Spiers
5.0 out of 5 stars A must read for anyone in a AS/NT relationship!
Reviewed in the United Kingdom on 13 June 2018
Verified Purchase
This book is a must for people in a AS/NT relationship. By showing both partners side of the same story it provides an incredible insight, particularly into how someone with AS reacts and processes daily life and events. Being a partner of someone with AS can be lonely and frustrating, this book helped me realise that I am not alone in facing these challenges and more importantly what I need to focus on ( and what I need to try and ‘let go’ of) to improve and sustain our relationship.
Read more
3 people found this helpful
Helpful
Comment Report abuse

This is a deeply damaging and unfair perspective on autistic individuals. If read widely, which I sincerely hope it isn't, it will only serve to cause further harm to the already vulnerable autistic community.
From the outset the book states it is "the perfect companion for couples in neurodiverse (ND) relationships who are trying to understand one another better" but it only has autistic males and neurotypical (NT) females. So balance out of the window immediately.
The book ignores the fact that autism is a very-nuanced spectrum, and focuses and portrays those with Asperger's Syndrome (AS) as geeky Sheldon-type male. Such ignorance displayed by comments such as that made by "trained clinical psychologist" Liz who, after her husband scored 32 [out of 50] on the AAA test stated "My 'mildly autistic' husband was not so mild at all!". Given there is no such thing as "mild” autism and more importantly, the type of autism is most certainly not determined by the score on the AAA test (which is NOT diagnostic), it is incredible that a book with extensive input from "world expert" Tony Attwood(TA) allows such an ill-informed statement to be made.
TA is the professional contributor to the book – providing several pages of comments of each couple’s story. Having heard TA speak at the Different Together Couples conference in May 2019 I heard first-hand all his jokes at expense of autistic people. He continues this ableist narrative in this book showing a shocking lack of respect for autistic people with his constant use of offensive terms and generalisations. Aside from his constant use of the pejorative term “the Aspie” (which the NAS discourage), examples include:
P27: Speaking "Aspergerese": "In relationship counselling I speak Aspergerese in terms of fighting Aspie with Aspie".
P28: Being “Aspergated” and how a NT can be "infected" by autism: "yes it is absolutely a case of Asperger's being infectious" and then goes on to say on p46 "Asperger's is infectious one-way - you hope, as an NT, that you are going to change the Aspie. No, if you did that you would get the Nobel prize for science and peace""
In several instances he, as do several of the female contributors, perpetuates the myth of autistic people having no empathy; there is no attempt to explain that whilst we may struggle with cognitive empathy, we do not generally struggle with affective empathy. This book (and the Different Together website) simply refers to empathy. This is a hugely damaging myth and it is disgraceful that TA has not used this platform to educate the audience.
He then goes on to make sweeping generalisations about autistic people. It is very convenient for him to handpick parts of each NT story and explain any negative instances as being due to their partner's autism. For example:
Page 45 Q: Karen talks about how she always seems to be the one at fault, in David's opinion. Why is this?
It's the Aspie's Teflon coating - "nothing sticks on me". It's their comforting mechanism throughout their life for having made so many errors.
Page 62 Q:Why is shouting and irritability often the packaging that AS use to communicate?
TA: Because they don't know how to be subtle, there are only intense emotions. So when any emotion is attached to what they do, it's at maximum volume.
Then there is the inconsistency and contradiction which is convenient for twisting the narrative to further disparage autistic people:
From p192: Why do so many people with AS seem to be able to cope with the demands of work but are not able to cope with the softer demands of home?
Because, work for the most part is predictable and the Aspie knows what is expected of them
Whilst on p110: Why can it be so hard for people with Asperger's syndrome to hold down a job?
Often this can be because of the social demands in that setting and the need, within most jobs, for flexibility in planning.
Many contributors to the book also ignore the genuine suffering of autistic people; to get a formal diagnosis of Asperger’s Syndrome, its needs to be shown that you suffer a "clinically significant impairment in everyday life” as a result of AS. Nowhere is this really covered - it is only the "suffering" of the NT that is considered. So how can this book possible state it is a “perfect companion” to a ND relationships?
I am not saying that ND relationships are straightforward, but to attribute all problems to the autistic partner, and none to the NT partner, is deeply unfair. As TA said himself at the Different Together conference “I wish NT people could see some of the damage they do to autistic people” (one of the few autism-friendly things he said). The empathy goes both ways.
And this book is an example of the lack of empathy that NT’s have towards autistic people and I sincerely hope some readers of the book look at other, more balanced, sources of information.

Amazon Customer
4.0 out of 5 stars Different Perspectives Together
Reviewed in the United States on 21 November 2018
Verified Purchase
This is a very insightful look into the interpersonal relationships of marriages where one partner has a strong indication or has a diagnosis of Aspergers Syndrome. We get a deeper understanding of the complex issues that inevitably surface and how each individual’s perspectives can differ dramatically. Tony Attwood, an expert in this area, answers pivotal questions that shed light on how to navigate the thinking and ‘language’ of someone on the Spectrum.
Read more
Helpful
Sending feedback...
Thank you for your feedback.
Sorry, we failed to record your vote. Please try again
Report abuse

PScoach
5.0 out of 5 stars Wonderful for understanding and insight.
Reviewed in the United States on 29 August 2019
Verified Purchase
Extremely helpful and informative. I’ve learned so much from all the different stories, interactions, accommodations, sensitivities, and everyone’s individual triggers and how to circumvent escalation and help to calm situations.
Read more
Helpful
Sending feedback...
Thank you for your feedback.
Sorry, we failed to record your vote. Please try again
Report abuse