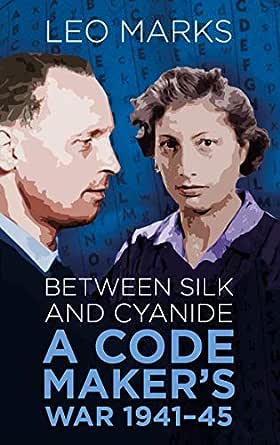 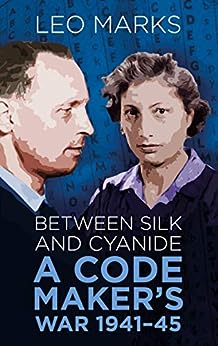 Between Silk and Cyanide: A Code Maker's War 1941-45 Kindle Edition

Twenty-three is awfully young to find yourself with the power of life and death...Leo Marks failed the examination to go and work on codes at Bletchley by being just too good and too much of a smart aleck. Instead, he was imposed on a not entirely willing Special Operations Executive (SOE) to teach coding to agents dropped into Europe and to decode the sometimes indecipherable messages they sent back at great risk to their lives. His speeches to his staff on the mortal danger of slowness or carelessness are classics of guilt-tripping. Absence of mistakes made him suspect that the Germans had captured SOE's Dutch agents--his youth and personality meant that his superiors were slow to believe him. In his spare time, he revolutionized cryptography by inventing one-time-only pads, and wrote poems for agents to use as keys--including the poem associated with Violette Szabo, "Odette".

This is a moving memoir of the agents like Odette and Noor Inayat Khan, whose fates we already know and whom he tried in vain to protect. This is a powerful memoir of war, responsibility and guilt; Marks, hitherto famous as screenwriter on Peeping Tom and son of the 84 Charing Cross Road family, has written a classic. --Roz Kaveney --This text refers to an alternate kindle_edition edition.

Richard Bernstein The New York Times An enthralling book, one full of an eccentric charm as well as fascinating, previously undisclosed details of the secret war waged in the occupied countries.

Ken Ringle The Washington Post A welcome and powerfully affecting chapter of World War II history, and a very human story of the most clandestine and cerebral art of making war.

Martin Scorsese A mesmerizing account of World War II as fought on the home front in Great Britain by the ingenious codemakers whose work determined the life and death of the Allied agents in occupied Europe. Leo Marks, a brilliant cryptographer, is a masterful and passionate storyteller. I was immediately swept into his secret world of codes and "undecipherables," trying at times (without success) to unravel the puzzles myself, and found it difficult to put down the book until the drama had come to an end. --This text refers to an alternate kindle_edition edition.

A World War II cryptographer chronicles his career in the Special Operations Executive, discussing his replacement of outmoded codes with one-time silk-printed codes. --This text refers to an alternate kindle_edition edition.

Leo Marks is renowned both as a cryptographer and as a screenwriter. His most famous work, Peeping Tom, a terrifying psychological thriller, is a cult classic of 1960s cinema. His father, Benjamin Marks, was the founder and owner of the legendary London bookshop 84 Charing Cross Road. --This text refers to an alternate kindle_edition edition.

In 1942, Leo Marks left his father's famous London bookshop, 84 Charing Cross Road, and went off to fight the war. He was twenty-two. Soon recognized as a cryptographer of genius, he became head of communications at the Special Operations Executive (SOE), where he revolutionized the codemaking techniques of the Allies and trained some of the most famous agents dropped into occupied Europe, including "the White Rabbit" and Violette Szabo. As a top codemaker, Marks had a unique perspective on one of the most fascinating and, until now, little-known aspects of the Second World War.

Writing with the narrative flair and vivid characterization of his famous screenplays, Marks gives free rein to his keen sense of the absurd and his wry wit, resulting in a thrilling and poignant memoir that celebrates individual courage and endeavor, without losing sight of the human cost and horror of war. --This text refers to an alternate kindle_edition edition.