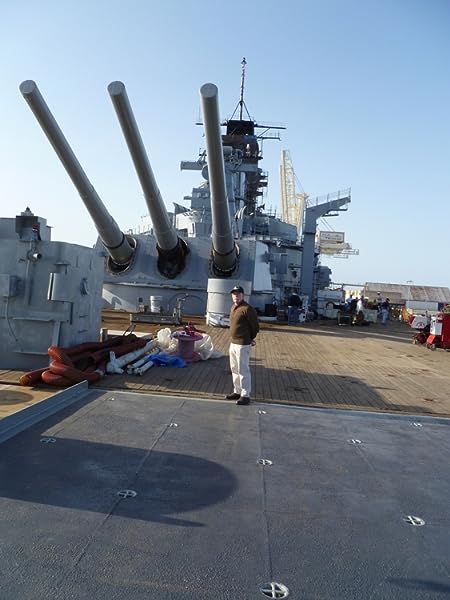 Born in Glendale Ca into a career Navy Family..I grew up on and around ships and naval stations...I went aboard a USN ship ( the Fleet Tug USS Sarsi ATF111) with my father for the first time at age 1 years in Jun 1951.....I went to sea a year later for the first time as a dependent with my family aboard the USNS Barrett T-AP 156 to Guam returning, to the US aboard the USNS Aultman T-AP152 in 1954...After a stint in Va were my father was stationed at the Pentagon (and assigned to the USS Kentucky BBG1 project) we were transfer in 1959 ti the San Diego area....While in High School I was member of the USS Parche Division of the US Naval Sea Cadets and a member of the California Cadet Corps ROTC program.....in 1966 I enlisted in the Army's Nike Missile Program and was stationed in Germany for 3 years...after discharge I worked as a computer technician on USN projects in the San Diego Area...working on many projects and aboard many ships...in the early 1970's I worked at the Ballistic Missile Early Warning Site I Complex in Thule Greenland for 2 years....in the mid 1970's I assigned aboard the USS Kitty Hawk CVA63 for an extended cruise deployment...........In 2005 my India born wife Swarn and the family cat Cozy relocated to the Eastern Sierra Nevada Mountains and open a full time art business (art by wayne) ..I began writing in 2007 and completed my first offering in Apr 2008

3.7 out of 5 stars
3.7 out of 5
14 global customer ratings
How does Amazon calculate star ratings?
Amazon calculates a product’s star ratings based on a machine learned model instead of a raw data average. The model takes into account factors including the age of a rating, whether the ratings are from verified purchasers, and factors that establish reviewer trustworthiness.
Top Reviews

DAVID ALCOCK
5.0 out of 5 stars recomended
Reviewed in the United Kingdom on 27 April 2012
Verified Purchase
a superb affordable brief history of american ww2 battleships contains photos drawings paintings and specifications .the photos would be inproved by being larger but the price would rise! recomended
Read more
One person found this helpful
Helpful
Comment Report abuse
See all reviews

D. S.
1.0 out of 5 stars A poorly written, amateurish rehash of common reference materials. Not worth the price.
Reviewed in the United States on 16 December 2008
Verified Purchase
Scarpaci's "US Battleships 1941-1963: An Illustrated Technical Reference" is a self-published, self-edited, amateurish rehash of the references listed in its bibliography. There is nothing new here. It is not well written. The illustrations are poor. It is not worth the price.

The text consists of a 6 page introduction, 2 pages on the impact of the disarmament treaties between the wars, a 10 page chronology of the war and post-war period, 88 pages covering the 15 classes of US battleships and battlecruisers, and the remaining 16 pages tabulating camouflage, battle damage, construction and scrapping, radar and fire control, armament, armor, and aviation. Obviously none of this can be covered in any detail. The book lacks an index.

Scarpaci's text is very poorly written, consisting of long series of statements of facts and opinions (such as his own classification of "generations"of US battleships). Shorthand is used throughout, including the numeric 1st instead of "first." A freshman English teacher would have a field day with his prose, which includes many phrases instead of complete sentences, run-on sentences, and very poor grammar (e.g. p. 40 "The ship probably sunk [sic] as much due to progressive flooding, from the unrepaired torpedo damage giving way as to the effects of the scuttling charges.")

The illustrations include a large number of photos (approximately 260) and some 47 line drawings (all elevation views). Unfortunately, squeezing these into an 8" by 10", 132 page book means that they are necessarily small, typically smaller than 2" by 4". They are all very poorly reproduced gray-scale jpeg files, replete with horrible digital imaging artifacts (such as blurred detail, aliasing, and pixelation). The line drawings are very blurry and difficult to look at. The book includes a number of the author's paintings of the ships. These are similarly small (less than 6.5" by 3") digital color reproductions that are also very unsharp.

Much better books providing the technical information as well as sharp line drawings include Breyer's "Battleships and Battelcruisers" (1973), and Terzibaschitsch's "Battleships of the U.S. Navy in World War II" (1977) which can be had on the used book market for less than the price of Scarpaci's book. And of course, Norman Friedman's authoritative "U.S. Battleships: An Illustrated Design History" (1985) remains in publication.

Addendum: Further to the above, Mr. Polychroniadi's comments on the quality of the graphics in the book are right on the mark. Finally, the author's comment on my review cannot pass without response. His personal attacks on my character (and my preteen's reviews of airsoft products) speak volumes about Mr. Scarpaci. He is, however, absolutely correct in suggesting that I utilize Amazon's very generous return policy.
Read more
37 people found this helpful
Helpful
Sending feedback...
Thank you for your feedback.
Sorry, we failed to record your vote. Please try again
Report abuse

Chris
4.0 out of 5 stars Not great for South Dakota Class battleships
Reviewed in the United States on 24 March 2020
Verified Purchase
It is a good book depending on the ships you want data on. It is not great for the US fast battleships in the South Dakota Class
Read more
Helpful
Sending feedback...
Thank you for your feedback.
Sorry, we failed to record your vote. Please try again
Report abuse

Apgar
1.0 out of 5 stars Look Elsewhere
Reviewed in the United States on 21 April 2011
Verified Purchase
I was very disappointedwith this book. The printing, particularly of photographs was blurred. The data was all available from existing print and free on-line sources. In my opinion it was a waste of money.
Read more
3 people found this helpful
Helpful
Sending feedback...
Thank you for your feedback.
Sorry, we failed to record your vote. Please try again
Report abuse

Charles W. Schedel
4.0 out of 5 stars Good infoamation, flawed presentation
Reviewed in the United States on 3 February 2009
Verified Purchase
Although there is a great deal of information available concerning the technical characteristics of the post-1939 US battleships; this is not the case with regard to the older ships. This book goes a long way to filling that gap with technical information on all US battleships that saw service during WW II.
Unfortunately the manner in which this data is presented leaves much to be desired. The photographs are reproduced far too small,three or four rather than one or two per page,with the that the details pointed out in the captions are virtually un-viewable. This book should have been printed in a much larger format and on glossy rather than dull paper
Read more
5 people found this helpful
Helpful
Sending feedback...
Thank you for your feedback.
Sorry, we failed to record your vote. Please try again
Report abuse
See all reviews
Unlimited One-Day Delivery and more
Prime members enjoy fast & free shipping, unlimited streaming of movies and TV shows with Prime Video and many more exclusive benefits.
> Get Started