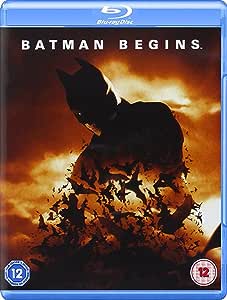 Christian Bale (Actor), Michael Caine (Actor), Christopher Nolan (Director, Writer) & 0 more Rated: Suitable for 12 years and over Format: Blu-ray
4.7 out of 5 stars 367 ratings
Note: This item is eligible for click and collect. Details
Pick up your parcel at a time and place that suits you. How to order to an Amazon Pickup Location? Learn more

Batman Begins explores the origins of the Batman legend and the Dark Knight's emergence as a force for good in Gotham. In the wake of his parents' murder, disillusioned industrial heir Bruce Wayne (Christian Bale) travels the world seeking the means to fight injustice and turn fear against those who prey on the fearful. He returns to Gotham and unveils his alter-ego: Batman, a masked crusader who uses his strength, intellect and an array of high tech deceptions to fight the sinister forces that threaten the city. Director Christopher Nolan (Memento) helms this prequel to the Batman films based on the DC Comics series, explaining how Bruce Wayne (Christian Bale, American Psycho) the billionaire prince of Gotham whose parents were killed in an alleyway mugging transformed into the crime-fighting superhero. With flashbacks to his privileged childhood, young Master Wayne, as he is called by the butler Alfred (Michael Caine), develops a terrible fear of bats when he falls through the backyard garden into a hidden cave. As a young adult, Wayne lives among the League of Shadows, a mar! tial arts group in the mountains of Asia. His leaders Ra's al Ghul (Ken Watanabe) and Henri Ducard (Liam Neeson) teach him strength, endurance, and unfortunately evil, against which he naturally rebels. Returning to Gotham and reinstating himself as a dapper socialite and the rightful heir to his parents' enterprise, Wayne quickly devises his secret identity, commanding help from the gadgetry expert Lucius Fox (Morgan Freeman). With one eye on his childhood playmate Rachel (Katie Holmes, Dawson's Creek) now a beautiful woman and dedicated lawyer and the other on his mission to save Gotham from criminal corruption, Batman makes his fledgling debut. But when the blue-blooded mastermind Dr. Crane (Cillian Murphy, Sunshine)taints the water system with a hallucinatory substance, Batman realises he has met his first true opponent.

In retrospect, Batman Begins is perhaps even more of a towering achievement than we first realised. Arriving eight years after the franchise-killing Batman & Robin, it managed to not only shine fresh light on the Batman franchise, but also emerge as a template for what a top notch comic book movie should be.

Much of the credit, of course, should go to the pairing of Christian Bale and director Christopher Nolan. Bale steps where the likes of Michael Keaton, Adam West and George Clooney have stepped before, and yet his Batman is darker and more complex than any of them.

Behind the camera is perhaps Batman Begins secret weapon, as Nolan--previously responsible for Memento among others--rewards the gamble to give him the job in the first place. His film is packed full of memorable characters, and he draws together a staggering cast, yet none of them are shortchanged. From Rutger Hauers brief cameo as head of Wayne Enterprises through to Morgan Freeman, Gary Oldman, Cillian Murphy, Tom Wilkinson and Liam Neeson, its the finest cast in a film of this ilk since the first Superman.

The films belated Blu-ray debut has, fortunately, been worth the wait, with the reference-quality 1080p image simply sparkling on any screen that can handle the resolution. Backed up with a thumping surround sound mix, this is superb work, and its fitting that it should be used on a film of this quality. Now? We just need The Dark Knight to join it in high definition. Thats what youd call a double bill...-Jon Foster

Page 1 of 1 Start overPage 1 of 1
This shopping feature will continue to load items when the Enter key is pressed. In order to navigate out of this carousel please use your heading shortcut key to navigate to the next or previous heading.
Back
Next
Pages with related products. See and discover other items: cillian murphy, dc movies, hd dvd
Unlimited One-Day Delivery and more
Prime members enjoy fast & free shipping, unlimited streaming of movies and TV shows with Prime Video and many more exclusive benefits.
> Get Started