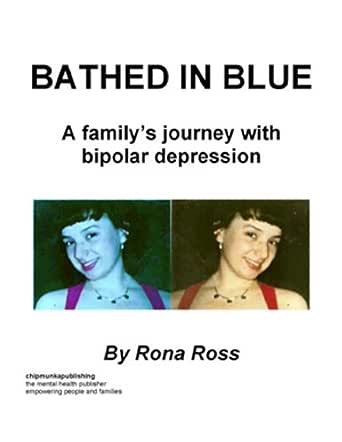 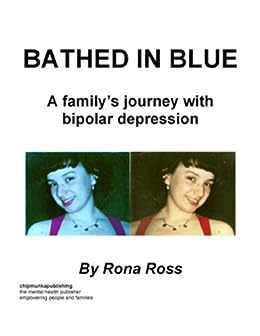 "Bathed in Blue; Richly Informative. Ms. Ross does not only give us a resourceful reference for bipolar disorder but also a fascinating narrative of her daughter's suicidal process." - By Dr Paul Wong, Clinical Psychologist & Training Consultant Hong Kong University Description This is a real life drama about a child of nine developing into a young woman and as the onset of puberty evolved, so did the condition bipolar affective disorder. Jennifer and her family struggled with an unnamed, unmedicated serious medical condition for 6 years before eventually the diagnosis bipolar affective disorder was made after a traumatic hospitalization. Once Jennifer was eventually hospitalized her troubles were not over. The metaphor for treating Jennifer was the equivalent of that of an ostrich, -- some professionals putting their heads in the sand and hoping she would go away. According to Stephen Fry's BBC's documentary 'The Secret Life of the Manic Depressive' the incidence of bipolar affective disorder has risen from 1%-5% in the population.New research proves that there are genetic links; bipolar affective disorder is not going away and the sufferers at risk of suicide are more than 15 times at risk to succeed at taking their own lives.Jennifer's story highlights that the early diagnosis and subsequent treatment for bipolar disorder needs to be improved. Jennifer asked me to be her voice to tell her story. The stigma of mental illness and high suicide rates renders sufferers invisible and after suicide - mute. Their stories buried or cremated with them. I describe our difficulties to access help for Jennifer in acute and chronic situations in two different countries. Jennifer describes her situation in the wards, in the community and her struggle to be heard by her psychiatrist and her thoughts on suicide, her treatment and her life. After her fourth episode Jennifer sat down with me and asked why it was it so hard to get the help she needed? We decided together write about it. Hence her personal writings. I hope by writing this book that the illness can be better understood by professionals and the community.I want the treatment to improve so much that the lives of chronic sufferers become more worth living and that suicide is taken seriously in sufferers with bipolar disorder and is no longer a high risk.About the Author When Rona was twelve her father was "committed" to a locked ward in the local psychiatric hospital. A short time later one of her aunts was also detained in the same hospital. Happily both relatives recovered. At seventeen Rona trained and worked as a Registered General Nurse in Scotland. Her training included experience in this same psychiatric hospital where she worked on the same high security locked ward where her father was 'committed'. She also worked in Dr Naylor's famous metabolic unit for sufferers of manic depression. Two decades later she visited her seventeen year old daughter, Jennifer, who was "committed" in a locked ward under section 28 of The Mental Health Act of 1984 over a six year period. Therefore, mental illness is not a stranger to her. Her two children were brought up in Hong Kong and both went to university in Britain.She did her degree in Humanities in Hong Kong and at the same time she trained as a counsellor with two Non Government Organizations. She has worked as a counsellor since 1988. --This text refers to the paperback edition.

4.0 out of 5 stars
4 out of 5
2 customer ratings
How does Amazon calculate star ratings?
Amazon calculates a product’s star ratings based on a machine learned model instead of a raw data average. The model takes into account factors including the age of a rating, whether the ratings are from verified purchasers, and factors that establish reviewer trustworthiness.
Top reviews

Crusader70
4.0 out of 5 stars A moving and enlightening read
Reviewed in the United Kingdom on 29 May 2009
The call that every parent dreads came at 3 a.m., Hong Kong time: her beautiful 23-year old daughter, just months away from completing her U.K. university course, had leapt to her death. The news was an awful shock to Rona Ross but not a complete surprise. Jennifer had suffered terribly from bipolar affective disorder (sometimes called manic depression) since puberty, and made many earlier attempts, resulting in repeated hospitalizations. Those afflicted by the disease are in fact 15 times more likely than the general population to succeed at taking their own lives.

It had taken years for Jennifer's increasingly erratic behaviour to be correctly diagnosed, let alone treated, and her parents had endured repeated frustrations in obtaining an answer to their desperate plea of "what is wrong with my daughter?" Recognizing how little useful information was available to other bipolar sufferers and their families, mother and daughter were already determined to collaborate on a book that might help them cope with the debilitating disorder and begun work just before Jennifer's tragic death. In this powerful, evocatively titled memoir, Ross completes their project and relates Jennifer's heartbreaking story in the hope that others may get the help they need.

Written in a straightforward, brutally honest style, Bathed in Blue is at its most harrowing in recounting the family's often mindboggling struggles with an unsympathetic medical establishment in both Hong Kong and the UK. That any psychiatrist could think it wise to decorate a waiting room for mental patients with faux bookcase wallpaper and a chair in the shape of a leering, multicoloured jester clown is just one comic example of the hurdles encountered. What becomes clear is how poorly doctors and nurses understand bipolar disorder (particularly in the young), the ravages it inflicts on the lives of its sufferers and their families, and the critical importance of a personalized plan of care that engenders that all-important hope for the future.

Photographs of Jennifer at various ages and her often very moving diary entries are woven throughout Bathed in Blue, bringing her intelligence, droll sense of humour and feisty personality to life. The book also includes a list of useful bipolar-related resources (magazines, newsletters, websites and helplines).

In a concluding chapter, Jennifer spells out her vision for future psychiatric care, offering commonsense suggestions based on her own less than satisfactory experiences with intimidating psychiatrists and callous mental hospitals. How often do medical professionals in their omnipotence ever stop to seek such advice from the people most clearly qualified to provide it? Earlier in the book, her mother explains how the stigma of mental illness renders people mute regarding their disease and its treatment, while suicide too often silences them forever. "Their suffering and their plight becomes forgotten and nothing changes," she writes. "This renders them invisible and without a voice. Jennifer asked me to be her voice and this book is her voice."

Mrs. Jane Moselle Climas
4.0 out of 5 stars Living with the tyranny of Bi-Polar Disorder.
Reviewed in the United Kingdom on 7 January 2009
Rona Ross writes movingly about the distress & pain that she & her family endured after her daughter Jennifer developed bi-polar disorder.
Jennifers own clear & powerful words are used to great effect in this book.An intelligent & talented girl whose life was wrecked by the relentless tyranny of this disease.
Rona's attempt's to get the best & most effective treatments for Jennifer are documented in detail as are her frequent battles with a number of unsympathetic mental health professionals .These make for chilling reading .
This book gives the reader a clear insight into what it is like to live with someone who has a bi-polar dis-order , its effects on family members & of coping with suicide.
Jennifer wanted her story told, which Rona has accomplished very skillfully .Rona speaks from the heart - a mother who tried to overcome the ravages wraught on her daughter by mental illness.
This book is a fitting tribute to Jennifer.
Read more
Helpful
Comment Report abuse
See all reviews from the United Kingdom
click to open popover
Unlimited One-Day Delivery and more
Prime members enjoy fast & free shipping, unlimited streaming of movies and TV shows with Prime Video and many more exclusive benefits.
> Get Started