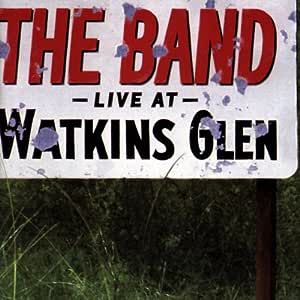 4.2 out of 5 stars
4.2 out of 5
10 customer ratings
How does Amazon calculate star ratings?
Amazon calculates a product’s star ratings based on a machine learned model instead of a raw data average. The model takes into account factors including the age of a rating, whether the ratings are from verified purchasers, and factors that establish reviewer trustworthiness.
Top Reviews

Sid Nuncius
#1 HALL OF FAMETOP 500 REVIEWER
3.0 out of 5 stars Not a real live album
Reviewed in the United Kingdom on 16 December 2015
This isn't bad – of course it isn't, it's The Band – but be warned that it was put out by the record label without any involvement of an band members and it's basically a fraud. Only two brief instrumental tracks were actually recorded live at Watkins Glen: Too Wet To Work (an organ solo by the great Garth Hudson) and Jam. The rest are all studio out-takes with audience noise overdubbed to give the impression of a live performance. They're OK, but the record company's cynical fakery really gets in the way for me and I can't listen to them without being put off by it.

Personally, I don't think this adds much to The Band's very distinguished canon. There's nothing actively bad here, but there's nothing sensational, either. For a genuine and really fine live album by The Band I would recommend the excellent Carter Barron Amphitheater album, recorded in 1976 and released in 2014, which knocks spots off this Carter Barron Amphitheater, Washington DC, July 17th 1976. I'd say this was one for completists and really serious fans. (Guilty, Your Honour.)

Geoffrey Millar
3.0 out of 5 stars Good, but Not Quite What it Seems
Reviewed in the United Kingdom on 21 February 2007
Taken on its own, this is a well recorded, enjoyable document of The Band, easily one of the finest groups ever. However, it's when you listen to other Band albums - in particular, the re-issued CDs with bonus tracks - that something doesn't seem right.

Without wishing to be libelled, Loving You is Sweeter sounds like the take from Rock of Ages; Endless Highway sounds rather like the version on Cahoots; and Back to Memphis sounds remakably like the take on Moondog Matinee with applause added.

These issues aside, the band plays and sings in top form and this is a good album - Caveat Emptor.

S J Buck
4.0 out of 5 stars Well worth searching for
Reviewed in the United Kingdom on 30 September 2006
This is the only official live recording of The Band playing as a quintet. Rock of Ages and the The Last Waltz have horns and other instruments augmenting proceedings.

You know you're going to enjoy this from the first track a stirring version of Chuck Berry's 'Back to Memphis'. Levon Helm's vocal is powerful and gritty and Robbie Robertson plays some mean variations on Chuck Berry's original rock 'n' roll guitar licks. 'Endless Highway' shows off the organ playing skills of Garth Hudson and the vocal by Rick Danko isn't bad either. Talking of vocals, the version of 'I Shall Be Released' on this album gives you the chance to hear Richard Manuel's unique singing voice. For this song its sung entirely falsetto, an amazing performance.

My favourite track on the album is 'Loving You Is Sweeter Than Ever'. A great cover of a Motown song, which on this performance sounds like it was written for The Band (it wasn't). Danko's vocal is brilliant, aching and desperate, with the rest of the backing vocals fitting perfectly.

The reason it doesn't get five stars is the inclusion of 'Too Wet To Work' a Garth Hudson instrumental which is like an old fashioned Cinema interval. He's a brilliant musician but this sounds out of place.

The rest of the album is great and captures one of the most important American/Canadian Rock N Roll groups at the height of their career.

Todd O. Daugherty
4.0 out of 5 stars What a great show
Reviewed in the United States on 14 December 2011
Verified Purchase
We went to this concert after my second (long story) senior year in high school, and what a show it was. Held at the Watkins Glen grand prix motor speedway, just a stones throw from Yasgur's farm, the concert drew twice the number of people as Woodstock. The line-up was the Band, the Grateful Dead, and the Allman Brothers; all at their height. They had been appearing all over the east coast in different pairs all summer and we saw each combination: Dead and Abros in D.C., Dead and Band in Hartford, and the Band and Abros in Jersey City.

The show was set for August 28, 1973 and promoter Bill Graham expected no more than 150,000. By the 27th, more than 600,000 were on site; the largest gathering for a rock show in history. It was a good thing that the Band was unaware of the size of the crowd since they had such a bad experience at Woodstock that their manager refused to allow their performance on the album or movie. Strains within the band were starting to be felt. They had just finished recording their album of covers "Moondog Matinee" and this was supposed to be strictly a money date for them.
Despite the growing tensions in the band and the beginning of downward spirals for some of the members; they managed a memorable performance. The Band was famous for spot-on live performances and they did not disappoint.

Drummer Levon Helm sings lead on the album's liveliest tracks: Chuck Berry's "Back to Memphis", Dylan's whorehouse rumble "Don't Ya Tell Henry" (released later on the "Basement Tapes") and the inevitable "Up On Cripple Creek". Bassist Rick Danko proved his mettle with leading the cover of the Four Tops hit "Loving You Is Sweeter Than Ever", and takes a central role in the ensemble on the sober guitarist Robbie Robertsons original about small town talk, "The Rumor". Richard Manuel supplies a wrenching version of "I Shall Be Released", the song he co-authored with Dylan. Robertson played a superlative guitar throughout the set and had penned the then-new "Endless Highway", a forcast of the end of the Band. The Watkins glen instrumental honors belonged to keyboardist Garth Hudson, who literally rose to the occasion. About hanlf an hour into the set, the skies opened up above the festival site and, Helm recalled, "It began to rain like a cow pissing on a flat rock." The rest of the group scampered for the wings with the torrent but Hudson returned soon behind his Lowery organ to spin the magical improvised fantasia that customarily prefaced the number "Chest Fever". The imaginative solo is preserved as "Too Wet To Work" and it turned what could have been a disaster into moments of magic.

The album may not be as well known as their other live albums "Rock of Ages" and "The Last Waltz", but it still shows how the group, no matter what the internal difficulties, were one of the best live performers of the era.
Read more
5 people found this helpful
Helpful
Sending feedback...
Thank you for your feedback.
Sorry, we failed to record your vote. Please try again
Report abuse

Doc W.
4.0 out of 5 stars The Band Delivers at The Glen
Reviewed in the United States on 13 October 2013
Verified Purchase
The Band At Watkins Glen is a solid performance by this legendary group. They play some of their great songs in front of a crowd of thousands of fans. Even though this recording does not contain as many songs as the Rock Of Ages live album, it is a wonderful 'nugget' of a live performance. Any fan of The Band needs to add this to their collection. Great stuff!
Read more
Helpful
Sending feedback...
Thank you for your feedback.
Sorry, we failed to record your vote. Please try again
Report abuse

SeanO
4.0 out of 5 stars Get it
Reviewed in the United States on 11 April 2018
Verified Purchase
Awesome but the last track won't play
Read more
Helpful
Sending feedback...
Thank you for your feedback.
Sorry, we failed to record your vote. Please try again
Report abuse

Edward Brydalski
4.0 out of 5 stars Four Stars
Reviewed in the United States on 28 March 2018
Verified Purchase
It is what it is.
Read more
Helpful
Sending feedback...
Thank you for your feedback.
Sorry, we failed to record your vote. Please try again
Report abuse
Load more international reviews

Andy K
5.0 out of 5 stars The Band is timeless!
Reviewed in the United States on 6 September 2011
Verified Purchase
the members of the Band were pioneers in their time and the music they left behind is timeless...what a great collection!
Read more
Helpful
Sending feedback...
Thank you for your feedback.
Sorry, we failed to record your vote. Please try again
Report abuse