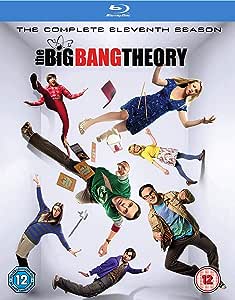 Drs. Leonard Hofstadter (Galecki) and Sheldon Cooper (Parsons) are brilliant physicists – geniuses in the laboratory, but socially challenged everywhere else. Enter beautiful, street-smart neighbour, Penny (Cuoco), who aims to teach them a thing or two about life. Despite their on-again, off-again relationship in the past, Leonard and Penny have finally gotten married. Even Sheldon has found a female companion – entering into a relationship agreement with neurobiologist Amy Farrah Fowler (Bialik) and he recently took their relationship to the next level by proposing marriage. In their free time, Leonard and Sheldon enjoy fantasy role-playing games with their ever-expanding universe of friends, including fellow scientists Rajesh Koothrappali (Nayyar), Howard Wolowitz (Helberg) and Howard’s adorable microbiologist wife, Bernadette (Rauch), who is now adjusting to life with their new baby girl, Halley.

Leonard and Sheldon are brilliant physicists – geniuses in the laboratory but socially challenged everywhere else. Insert beautiful, street-smart neighbor Penny, who endeavors to teach them a thing or two about the “real” world. Despite their on-again, off-again relationship history, Leonard and Penny have tied the knot. Even Sheldon has entered into a “Relationship Agreement” with neurobiologist Amy, and he recently took their relationship to the next level by proposing marriage. Will the possibility of domestic bliss alter the chemistry between these two extreme achievers? Will Leonard prove to be a brilliant writer? Will Raj’s search for new love rival his search for new stars in the cosmos? Will Howard and Bernadette’s growing family reach critical mass? Quantum comedy continues to converge in all 24 Season Eleven episodes of this laugh-out-loud megahit.

4.8 out of 5 stars
4.8 out of 5
314 customer ratings
How does Amazon calculate star ratings?
Amazon calculates a product’s star ratings based on a machine learned model instead of a raw data average. The model takes into account factors including the age of a rating, whether the ratings are from verified purchasers, and factors that establish reviewer trustworthiness.
Top Reviews

This Is not a jumping on point. New viewers should start with season one.

Following on from the cliffhanging end to the previous season, major changes await Amy and Sheldon. Which is the main focus of the entire season.
Meantime, Howard and Bernadette have another baby on the way. Which they really didn't plan for.
Leonard and Penny just get on with life. And what the rest of it offers them.
And Raj is still single, despite his best efforts.

Hate to say it, but this season is a bit tired. You have a superb opening episode, which shows off the strengths of this and the last two years. Major emotional character development moments really work because they are great moments for characters we really care about. But then, after a solid second episode, come two that only raise smiles and chuckles rather than belly laughs. But do still have good character moments.

Then there's a run of five in a row with Sheldon being selfish and inconsiderate. Which, after all this time, finally gets rather annoying.

It does then manage to allow Raj a bit of development. And the second half of the season, where is usually can drift and not have much focus, really does get going. This half of the season is stronger than the first, and really does build up excellent momentum. Leading a superb season finale.

There's just the right amount of Stuart. Surprisingly little Bert. A good amount of Kripke and Wil Wheaton. And Leonard and Sheldon's mothers. Plus some good new appearances in the season finale and one character I never expected to see again. Some good big name guest stars also turn up. And it does write around Melissa Rauch's real life pregnancy well.

The length of the episodes is in general a little bit longer than the last two seasons, so that does allow them to have a bit more meat on them than we've had in the past few years.

Ultimately, a season that rallies and succeeds, but a show that, whilst still funny at it's best, has little life left in it now, so it's good that the twelfth year will be the last.

The dvd has the following language and subtitle options:

Extras are all on disc two. And you don't get the usual comic con panel.

Gag reel: Seven mins of outtakes. People messing up dialogue and lines and prop mishaps. But this series has always managed the best gag reels ever, and these are all funny.

Paul
5.0 out of 5 stars Very pleased with purchase, exceeded expectations. Another great season for BBT!
Reviewed in the United Kingdom on 11 November 2018
Verified Purchase
I am happy to say that this season is better than I hoped, and far exceeded my expectations, with several laugh out loud moments in the first few episodes alone. Extremely well written, jokes come thick and fast , so as to demand repeat viewing for the slow coaches like myself. Like the previous season the first episode was a bit worrying, as was not particularly amusing, but it was fine to get the ball rolling and from the second episode they're back. Okay so they are older and some ground is retrodden, but the writing is so good that this can easily be forgiven by genuine fans of comedy and the BBT team. After 11 seasons it is to be expected that this will happen, and yes one or two cracks are beginning to show in this regard, but I think this is more to do with the characters getting older and it gradually becoming a show about family ups and downs, having babies, getting married, etc, the same happened in Friends and even Frasier to some extent. However unlike those two shows I believe that BBT has remained consistent and has not dropped the ball once in its comedic value and premise. Only once perhaps in the first episode of season 10 was I appalled at the poor casting choices. I recommend this season along with seasons 4-10 as being superb and extremely entertaining. When you return to the first 3 seasons and compare these to the last two you will see what I mean. I am looking forward to season 12 and believe that if they can achieve the same standard as they have here, they could even grace us with another two after that, but perhaps that is asking too much. But if the actors are willing and the writers are still on board why not.
Read more
One person found this helpful
Helpful
Comment Report abuse

rhase
5.0 out of 5 stars Five Full Stars for the ELEVENTH time !!!!!
Reviewed in the United Kingdom on 15 October 2018
Verified Purchase
The arrival of the latest Big Bang Theory series is ALWAYS like the opening of one's Christmas stocking, filled with five star goodies and endless surprises - so it is utterly needless to have to say that this year is no exception. This year is, however, a little different, if not exceptional, in that Sheldon does finally tie the knot with the ever so patient and loving Amy (who is also my absolute favorite character in the whole show) while showing a great deal of social empathy (even though he's still a fairly big jerk at heart). In fact all the characters seem to have matured in this series while the scientists are clearly focusing a lot more on their work and achievements and a lot less on their silly but wonderfully good fun games. I can hardly wait for next year's final series, when I expect all the remaining loose ends (such as Raj's and Stuart's single statuses) to be tied up but, as we all know, in this masterpiece show we have to always expect the unexpected.
Read more
Helpful
Comment Report abuse

Dove
5.0 out of 5 stars All episodes and extras on 2 discs
Reviewed in the United Kingdom on 10 February 2019
Verified Purchase
I had thought big bang theory had started to lose its touch but after buying this to keep my collection complete, i realised how wrong i was. I forgot how funny it is. I think i prefer watching the episodes on dvd one after the other, rather than watching on tv and waiting weekly for each episode.
We watch tv series while in bed and I couldn't sleep I was laughing so much, surprised I didn't wake my husband.

The dvd case holds 2 discs, I think one disc has 13 episodes and the other has 10 or 11. Which is great not having to get up and change discs as often.
Read more
Helpful
Comment Report abuse

dutch
3.0 out of 5 stars weakest season so far
Reviewed in the United Kingdom on 29 December 2018
Verified Purchase
What the hell happened to the Big Bang Theory, the stories this season are so dull and repetitive. It started well with the season opener and ended well with the finale, but the remaining entire season is appalling, and this was the Number one show is America, how bad is TV now? The sound quality is bad transferred onto 2 discs and the endless stories about babies and marriage are really annoying, do the writers not know who their audience were. Thank god there's only one season left, maybe that will sharpen the writing. Very disappointing!
Read more
Helpful
Comment Report abuse
See all reviews from the United Kingdom